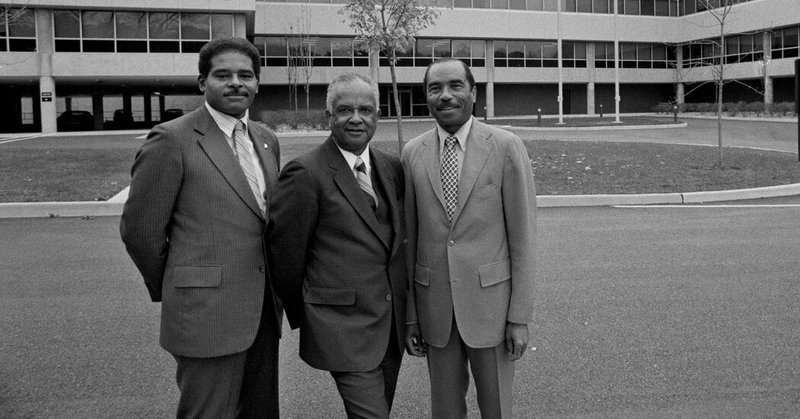 Posted from nyti.ms
Posted in these groups:

SGT (Join to see)
Posted 1 mo ago
Ken Kraetzer your above meme wants to sell you a subscription to the NYT to read it... so I found a different one... it's all below;

HARLEM, NY — Eugene Webb, a child of Jim Crow Alabama who rose to become a Harlem power broker and one of the city's pioneering Black real estate executives, died on Monday at the age of 102.

Webb was born in 1918 in the small town of Red Level, Ala., and grew up in a poor suburb of Birmingham known as Sandy Bottom.


After high school, Webb left the South to join the Seabound Rail Road as a dining car waiter, according to the oral history. After a stint in the U.S. Navy during World War II, he moved to Harlem, where he attended Columbia University and first entered the world of real estate.

In 1968, he teamed up with George Brooker to found Webb & Brooker, which became one of Harlem's first Black-owned brokerage firms. Brooker's son, Jeff, took over as partner after his father's death.

"If you’re someone in Harlem you know who Eugene Webb and Jeff Booker were," said Landon Dais, a Harlem attorney and cannabis executive who knew Webb since childhood.

The firm saw quick success, quickly becoming "a reputable, sophisticated real estate operator" in the city, according to a 2018 retrospective.

By 1976, the company managed 6,000 housing units in Harlem, Brooklyn, Queens and the Bronx, including 4,000 subsidized apartments.

"In Harlem we've pooled about $20 million in rents," Webb boasted to the New York Times that year, as part of an article about the rise of Black real estate managers.

Still, he never lost sight of what his firm's success meant to Harlem, and to a city where little property was in the hands of its Black residents.

"Do you realize what that means if that money is channeled to local businesses to hire black plumbers, painters and contractors?" he said.

"Scratched and clawed his way"
Webb cared deeply for his community and his country, said Dais, but he could be "rough around the edges in his old Alabama way."

"He wasn’t a guy of pleasantries. He would cuss you out," Dais said.

That attitude may well have contributed to Webb & Brooker's prosperity, which continued into the early days of Harlem's gentrification. A 1983 Times story about the growing popularity of Harlem's townhouses quoted Webb urging the city to move blighted buildings "back onto the private market."

"[T]hat's the only way large-scale revitalization will take place," he said.

In recent years, Webb graduated to chairman emeritus of his company. Despite being a self-proclaimed Black Republican, Webb had "no prouder moment" than when he cast his vote for Barack Obama in 2008.

A proponent of historically Black colleges and universities, Webb was a trustee for Miles College and held an honorary doctorate from Stillman College, both in Alabama.

Webb's survivors include his wife and two children.

Webb's success in Harlem marked a remarkable path for "a Black man that grew up in the Jim Crow South — the real Jim Crow South," Dais said.

"He really scratched and clawed his way to be a multimillionaire," he said. "May we all have that type of life."
(1)
Comment
(0)

Lt Col John (Jack) Christensen
1 mo
They pretty much all do, Washington Post is the worst though.
(0)
Reply
(0)
Read This Next
RallyPoint Home