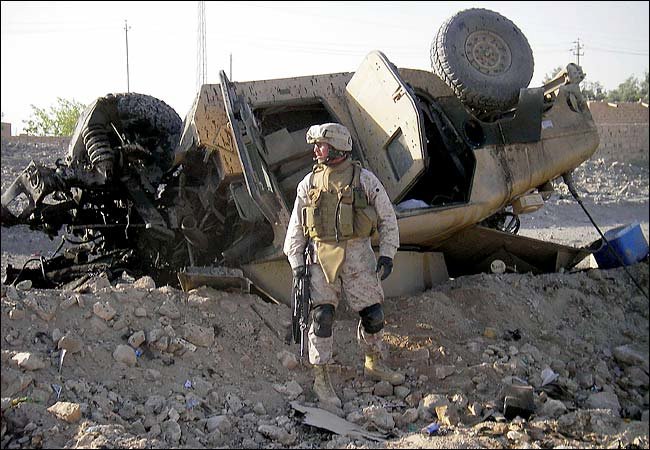 The question posed to General Dempsey: If the Iraqi city of Ramadi, which is under imminent threat from ISIS, fell into jihadist hands, would it matter?

According to Army General Martin Dempsey, the chairman of the Joint Chiefs of Staff, not really. The bigger threat, he says, is the other city ISIS is moving in on—the oil-rich central city of Baiji.

Our Marine friend is home on leave and we spent some time with him and his family. He fumed as he talked about the Marine he lost taking Ramadi and if it didn't mean anything why did we sacrifice those lives.

He advised he wasn't a General but anyone could determine that Ramadi is strategic in nature, it's only 70 miles from Baghdad and it is important to the Sunni people making it an important part of bringing Iraq together.

What is your opinion? Is or was Ramadi important, or doesn't matter?
Posted in these groups:

SGT (Join to see)
Posted 5 y ago
I was in Ar Ramadi back in 2006-2007. It was where I earned my CAB. We lost quite a few soldiers there. I also conducted the memorial ceremony for AO2 (SEAL) Marc A. Lee. It was still considered one of the most dangerous places on earth back then. It was an important city -- because of the amount of resistance that had taken root there. To a good extent, the Army and Marines settled the city down a lot. Fast forward to now -- it may not be nearly as important (both strategically and tactfully). Especially with the removal of the majority of US forces -- focus goes to higher priority areas. The lives lost there during the previous years are not forsaken, but merely that the primary sites are elsewhere currently. However, that isn't to say that the "priority" level of Ramadi might not go up, and become a primary focus in the future. It just isn't at this time -- given all the intel that GEN Dempsey and others are looking at.

Prior to Ramadi, my unit was in Karbala (2004) -- we essentially kicked the enemy out. We lost a few soldiers in the process. Years later, they had taken up residence in Karbala once again. From what I know -- we never sent more soldiers to "clean up" Karbala again.

Iraq -- then and now -- was/is a giant game of "whack-the-mole." You'd crush it in one spot, and it'd pop up somewhere else. You go to crush it there, and it'd pop up where you had just left. It's arguably worse since now the man power just isn't there to cover most the holes.
(2)
Comment
(0)

LTC Paul Labrador
5 y
I agree. Look at it objectively vs emotionally. The only strategic value Ramadi has now is that it straddles the major E/W MSR, and if ISIS takes it, they can cut off Al Asad form central support. However, with the relative lack of anti-air assests, you can still resupply Al Asad by air. Beyond that, not much there to fight over. As you stated, the value of Ramadi duirng OIF was that it was a hotbed for insurgents. That isn't the case anymore.
(3)
Reply
(0)

MSgt James Mullis
Edited 5 y ago
Posted 5 y ago
My first thought was that his answer sounds as if he's saying that Ramadi is only important if you cared about who controls the oil fields. However, I think its more likely that when faced with limited resources in country, unreliable allies, and a civilian leadership that is unwilling to give him the resources necessary to defeat ISIS in Iraq (whenever and wherever they stand and fight) he was answering the question based on likely outcomes and is trying to present the best face to the public and media.
(2)
Comment
(0)

SPC (Join to see)
5 y
MSgt James Mullis I agree it was a lot about the optics and probably driven by the executive office. It's the cavalier way in which General Dempsey advised that we can take it back. While that is true it will cost more American lives. As we continue to run our battles based on politics, ideology, and ROE's that place our battle buddies at risk we can expect to see more casualties.
(1)
Reply
(0)

I think it was an unwise, insensitive, and very telling statement.

It was unwise in the fact that any gains by ISIS should be of major concern to our military and political leaders, especially if they are retaking an area we secured with the lives of our service members.

It is insensitive in that it disrespects the sacrifices made by those who lost their lives to secure that city. It makes it seem their deaths were not important.

It is very telling in that it shows that our most senior military leader is out of touch and little more than a mouthpiece for an inept and corrupt administration that has no clue about effective foreign policy and no regard for the military.
(1)
Comment
(0)
Show More Comments
Read This Next
RallyPoint Home