Did you know that Glen Coffee, NFL running back, is at Ranger School? Your Thoughts? 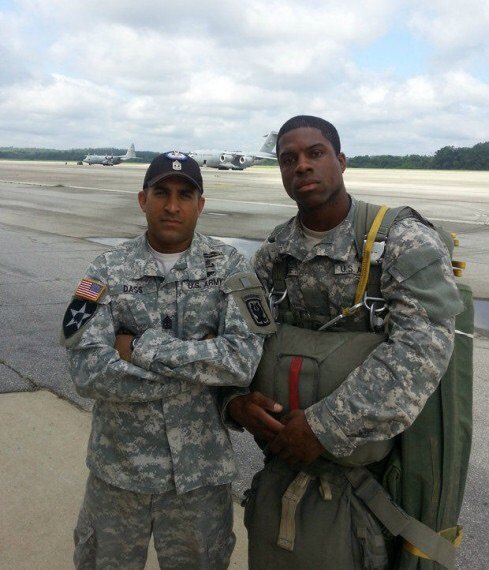 Glenwood Razeem “Glen” Coffee, Jr, after being a starting running back in his Junior year at the University of Alabama in 2008, became a third-round draft pick for the NFL in 2009 and he was picked up by the San Francisco 49ers. Before the 2010 season began, he retired from the sport after one year as a second stringer on the NFL team.

According to ProFootballTalk, he told the Sacramento Bee that the NFL ruined too many lives;
http://profootballtalk.nbcsports.com/2011/05/22/glen-coffee-nfl-ruins-a-lot-of-lives/

“As far as the NFL goes, I have a hard time putting it like this because it sounds kind of harsh, but I feel like it ruins a lot of lives more than anything else,” Coffee said. “And that goes for people who have short careers in the NFL and long careers in the NFL. Because what happens is they see that as success.”

According to the Washington Post, he found Christ and football was no longer a dream.

In 2013, he enlisted in the Army and he’s currently a specialist and part of the support staff for waterborne operations at the 6th Ranger Training Battalion at Eglin Air Force Base, near his home at Fort Walton Beach.

The Post asked him if he is going to train to be a Ranger;

Although not in Special Operations…he is asked regularly if he wants to attend Ranger School himself. The grueling leadership course is a minimum of 61 days long, with minimal sleep and food and stints at Fort Benning, Ga., and the mountains of northern Georgia before arriving in the swamps of Eglin Air Force Base.

“That’s one of those things I ask myself right now, as a matter of fact,” Coffee said of attending the course. “Am I thinking about that because I want to do it out of pride, or because it would actually better me as a person? So, I’m debating that right now. I have to ask myself, why would I want to go?”
Posted in these groups:

CW4 (Join to see)
Posted >1 y ago
I think that it's great. Some people just understand that thier is more in life than playing sports and potentially for millions of dollars. He deserves the credit just like Pat Tillman.
(6)
Comment
(0)

SGT (Join to see)
>1 y
CW4 (Join to see), I agree. His is an interesting story, being that he didn't want to play football, but went on to become a great athlete. I hope he doesn't end up like Pat Tillman.
(2)
Reply
(0)

SGT Randal Groover
Posted >1 y ago
Now that is a great testamony!
(3)
Comment
(0)

CW3 (Join to see)
Posted >1 y ago
I don't think it is ever is about what someone did before they joined the military. We all come from some many different walks of life, and it is together that we make up the strongest military force in the world. If he is a dedicated soldier, we are better as a team because of it. I imagine his background in sports (focused on the team) will make his transition to military life much easier.
(2)
Comment
(0)

SGT (Join to see)
>1 y
CW3 (Join to see), Well I think it is better if they have a good tract record, and are responsible citizens, as opposed to someone joining the military without those things. I'm pretty sure he'll make a good soldier since it's always what he wanted to do.
(0)
Reply
(0)
Show More Comments
Read This Next
RallyPoint Home