Do ADOS personnel get their job back when they return from a deployment if they get deployed while on ADOS orders? 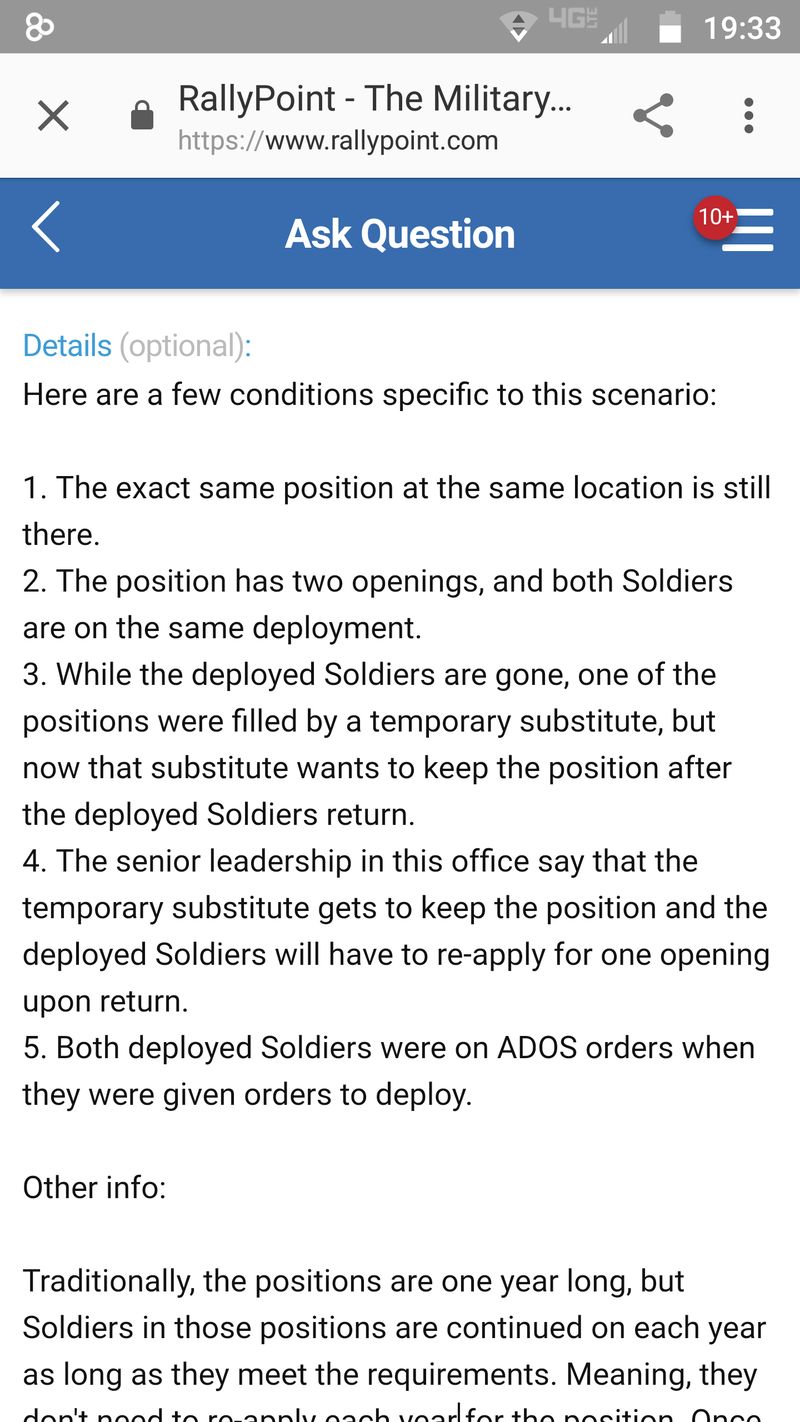 See photos for details. Thanks for the help!
Posted in these groups:

Exceptions are if the servicemember is no longer capable of performing that job (say if they became disabled and worked in construction previously), or if the job no longer exists due to attrition. It also excludes anyone who, during their service, was discharged with a less than honorable discharge.

So one of the Soldiers would get the position that they left from, and the other would either get their job back as well, or get a position similar in pay, duties, etc. It sounds like the employer did not fully understand their obligations under USERRA, or else there were other circumstances.

ESGR's trained Ombudsmen answer thousands of questions every year. Below are some questions frequently asked by employers and Service members alike.

COL Vincent Stoneking
3 y
Solid answer Sgt (Join to see). One wrinkle here, that I think the employer may be attempting use here is the stuff in the "additional info" about the job being a one-year term, which is renewable as long as qualifications continue to be met. I would really want to know more about what that exactly means. Is a person guaranteed to be renewed, it it just common practice, what are the qualifications that must be met, etc....

In general, I think it's a dick move by the employer, but I don't have enough to be 100% certain that it's an illegal dick move (right around 85%, though).

I'm happy to say that I come off orders the end of next week, and my employer has already sent the "welcome Vince back" email and my temp guy is almost completely out of my office as of Tuesday.
(1)
Reply
(0)

CPT Andrew Wright
Posted 3 y ago
No. USERRA doesn't work for someone already on military orders. If you had left a state, federal or civilian position then the government could compel an employer to re-hire you. You will have to get out their and look for a job when you get back. If the unit you were on ADOS with are good sports they might send something your way. ADOS is not a permanent job-have you worked the AGR angle?
(3)
Comment
(0)
show previous comments

COL Vincent Stoneking
3 y
CPT Lawrence Cable - It's the nature of employment being returned to that is key in this case. I missed it originally, but CPT Andrew Wright nailed it.

The issue is that the Soldier is NOT returning to a civilian (to include mil tech, state, or federal) employer. Rather, he is wanting to return to being on ADOS orders. ADOS orders are not "employment" as considered by the law, and are not protected, guaranteed, on an entitlement. NO unit is ever obligated to put any Soldier on ADOS orders, nor is there any obligation to continue a Soldier on same. Despite the whole doing work and getting paid thing, they really shouldn't be considered "employment" in this context. It is, by definition, temporary work.

Further, in order for the deployment orders to be issued, the ADOS orders had to be either rescinded or amended to have an end date prior to the effective date of the deployment orders, as you cannot be on active duty under multiple statuses. As soon as that happened, the "employment" disappeared.

The unit appears to be trying to be fair. If the unit has two slots, one of which is occupied, they have limited options. They can take both back, terminating the orders of the Soldier who applied for and was accepted onto ADOS orders. They can do a by-name request for one Soldier, and leave the other to hang. They can have the two Soldiers both apply for the remaining position. It appears that they have chosen the latter option.
(2)
Reply
(0)

CPT Lawrence Cable
3 y
COL Vincent Stoneking - OK, he's asking if he will get his ADOS slot back instead of his civilian employment. If that's the case, I agree with Cpt Wright. I misunderstood his question.
(0)
Reply
(0)

Sgt (Join to see)
3 y
COL Vincent Stoneking - That's definitely a different story then. Unfortunately it seems that one of the soldiers may be SOL in that case.
(0)
Reply
(0)
Read This Next
RallyPoint Home