Do you go to your service's birthday ball?

GySgt (Join to see)
9.83K
116
44
5
5
0
It wasn't until I joined a joint service unit where I became aware of how many service members have never even gone to their own ball to celebrate the birth of their service. Marines practically make it mandatory to attend, even in the reserves. The ball will be on a duty day or a drill day, if you do not go, you become part of the working party which forces everybody to end up going to the birthday ball anyways. You either buy a ticket to the ball and wear you dress uniform or not pay and be part of the working party to run the ball wearing a service uniform.
Do you go to your birthday ball? Have you been to other service's balls? Does your unit put importance on attending the ball or even make it mandatory like my example?
Posted in these groups:

SSgt Gregory Guina
Posted 7 y ago
I try to make the Marine Corps Ball every year. I have missed a few in my career but I enjoy getting together with everyone and having a good time. This year will be my final Ball as an active duty Marine and I will be there lookin good in my dress blues.
(6)
Comment
(0)

Pvt Kevin Phillips
>1 y
Not sure which unit's ball to attend. I know Marines in different units but do not know which one to attend. Hardly any of them are on the same date.
(0)
Reply
(0) 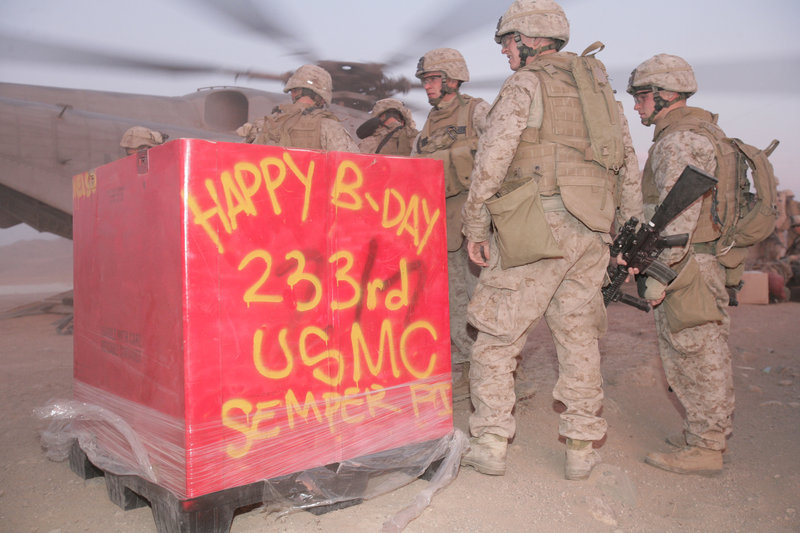 Ive been to every ball and even with combat deployments, celebrated. Not sure if you all have the same but for deployed areas, they have these birthday cakes that they deliver to every fob so Marines can celebrate the birth of our Corps.
(4)
Comment
(0)
show previous comments

GySgt (Join to see)
7 y
Yes all due to one Commandant who made it so, John A Lejeune. He ensured everybody will hear his birthday message for as long as the Corps exists. I'll post his message in a separate post.
(3)
Reply
(0)

CPT Aaron Kletzing
7 y
SSgt, can you give more details on the story of how Lejeune did this? Would love to read about that. Sounds cool. Thanks!
(3)
Reply
(0)

GySgt (Join to see)
Edited 7 y ago
Posted 7 y ago
Every Marine is to be read this in celebration of the birth of our Corps
MARINE CORPS ORDERS
No. 47 (Series 1921)
HEADQUARTERS U.S. MARINE CORPS
Washington, November 1, 1921

(1) On November 10, 1775, a Corps of Marines was created by a resolution of Continental Congress. Since that date many thousand men have borne the name "Marine". In memory of them it is fitting that we who are Marines should commemorate the birthday of our corps by calling to mind the glories of its long and illustrious history.

(2) The record of our corps is one which will bear comparison with that of the most famous military organizations in the world's history. During 90 of the 146 years of its existence the Marine Corps has been in action against the Nation's foes. From the Battle of Trenton to the Argonne, Marines have won foremost honors in war, and in the long eras of tranquility at home, generation after generation of Marines have grown gray in war in both hemispheres and in every corner of the seven seas, that our country and its citizens might enjoy peace and security.

(3) In every battle and skirmish since the birth of our corps, Marines have acquitted themselves with the greatest distinction, winning new honors on each occasion until the term "Marine" has come to signify all that is highest in military efficiency and soldierly virtue.

(4) This high name of distinction and soldierly repute we who are Marines today have received from those who preceded us in the corps. With it we have also received from them the eternal spirit which has animated our corps from generation to generation and has been the distinguishing mark of the Marines in every age. So long as that spirit continues to flourish Marines will be found equal to every emergency in the future as they have been in the past, and the men of our Nation will regard us as worthy successors to the long line of illustrious men who have served as "Soldiers of the Sea" since the founding of the Corps.
JOHN A. LEJEUNE,
Major General Commandant
75705—21
(3)
Comment
(0)