Cpl Westin Sandberg
19.1K
122
117
9
9
0
It seems to me that this is usually the case, for example I openly carry my pistol everywhere I go, in Colorado (an open carry state) and every cop feels the need to stop and bother me, and it gets worse when he finds out I'm a vet, it goes from we are just concerned, to what? You have ptsd and are going to shoot up a school? Actually got my stuff confiscated recently with an upcoming court date for "disorderly conduct"... they for some reason don't seem to like the idea that a veteran doesn't like relying on police to keep them safe... especially not a combat MOS Marine with two deployments...
Just wondering about everyone else's experiences...
Posted in these groups:

SFC (Join to see)
Edited 6 y ago
Posted 6 y ago
The first question I have is why do you feel the need to carry openly? I know you may have a right depending on where you reside but I still would like to know why? Carrying a gun does not make you cool or make you invincible and it has been my experience that those that carry openly just want to act like they are cool and draw attention to themselves.
Your mentioning Marine and two deployments is irrelevant, I have served in two wars and many deployments and still keep my weapons concealed. I carry for the protection of myself and family as well as that of others if the need arises but no one ever knows I have it.
As a police officer I will say that I too would stop you ( harass you as you put it) but only to make sure you are legal and find out your intentions. You could have just gone about your business and no one would have been the wiser had it been concealed. If you truly feel the need to carry in public openly and don't want to be stopped, join a police dept and put on a uniform. Did you ever wonder why off duty cops carry theirs concealed ?
(11)
Comment
(1)
show previous comments

SFC (Join to see)
>1 y
Cpl (Servicemember), I had to give my first thumb down. your post is ludicrous and completely out of touch with reality. Research self defense shootings and get back with me.
(1)
Reply
(0)

SPC (Join to see)
5 y
First of all a police officer must articulate that he believes there is reasonable articulate suspicion that crime is afoot before detaining anyone. Stopping someone just because they are carrying a firearm is stupid. There's a huge difference between brandishing and carrying. I cannot believe that so many people have sworn to defend the constitution of the United States of America and feel that it's wrong to carry a firearm. The crime rate in Detroit dropped 37 percent when concealed carry laws were reversed a couple years ago. States like Wyoming and Alaska have extremely low violent crime rates (not including suicide by firearm). The Corporal that posted this was asking a question because he felt his rights were violated by people that swore an oath to protect his rights. I do not get the feeling that it was directed as an insult to all police officers or the respect that they deserve. I've stopped hundreds of people with firearms for various driving offenses and not once have I harassed anyone or arrested them for possessing a firearm unless they have been deemed unfit by a court to possess one. I have told countless people that have concealed carry permits that they should carry and there's not a single point in having a CCW if they do not. As a police officer we signed and swore an oath to defend the constitution of our states and nation... So stop fence riding and defend them. Just because someone says you can arrest someone does not mean you should. It's officer discretion. Furthermore we should be teaching firearms safety more seriously in our country. We know people have the right to bear arms so why are we not teaching firearm safety in our schools. They use to teach firearms safety in schools where I grew up and the result was understanding and respect for a weapon. When people do not stand up for their rights they are taken. That being said," I will re-iterate that the side of the street is not the place to have an altercation about carrying a firearm with a police officer. Be compliant and cooperative and contest your issue in court to the highest level possible." Police officers do not write the laws they enforce them. These issues need brought to the attention of your Supreme Court and State Representatives. Most police officers I know and have worked with in the past are pro concealed or open carry. If you're a police officer you should understand the oaths you took were to defend the citizenry and make it safe for them to practice their rights openly.
(1)
Reply
(0)

SSG (Join to see)
>1 y
SFC (Join to see) - criminals are generally cowards. If they see a weapon, most will move on. That being said, some police feel threatened when seeing open carry. I've pressed a few and finally got them to admit why they hate open carry. Argument can also be made if coward sees weapon he moves on or he sees no weapon and forces ccw to take extra time to draw. Could go either way. When I see open carry, I'm not the least bit concerned. Usually I shake the person's hand and tell them good for you for exercising you rights. Too bad many others are too fearful to do the same.
(1)
Reply
(0)

CPO (Join to see)
Posted >1 y ago
I'm in the reserves. I did seven years active in the coast guard and I've been a police officer for 17 years. I'm a sergeant. Any of my officers write a ticket to military they walk a foot post
(6)
Comment
(0)
show previous comments

PFC Julian Wright
>1 y
SGT (Join to see) - okay dont know what happened there. I was going to say it's not any more or less ethical than filling ticket quotas but just about every dept. in the universe does it.
(0)
Reply
(0)

SMSgt Lawrence McCarter
>1 y
PFC Julian Wright - Actually our Department never had a ticket quota although We wrote a lot of tickets. We did have a standard for being reasonable however, We didn't even stop anyone that wasn't a lest 15 miles over the limit and then it was up to the Officer how to handle that. The choices, verbal warning, or written warning or Citation for the violation with fine, Court or both. (minor violations could be mailed in).
during off peak hours, for example during a mid shift We gave more leeway as to speed, 20 MPH over to even get stopped and a break could still be given, it was up to us unless a more serious violation ie Operating under the influence, criminal violations, Warrants etc came into play. We did however still issue thousands of moving citations and number which dropped with compliance with motor Vehicle laws by motorist. The drop also resulted in less of the serious Motor Vehicle accidents and traffic fatalities. That was the purpose anyway and it worked.
(0)
Reply
(0) 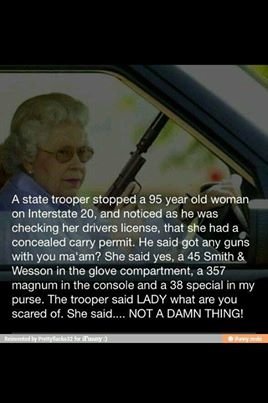 You know, maybe the police see females as different... then again, I have a purse with the Eagle, Globe, & Anchor on it... I drive a truck with several USMC stickers, and more often than not, I find that police ask about the stickers, by saying, "Oh, your husband was in?"
Maybe, they feel safer seeing a chubby, greying woman carrying than they do a man. I had a policeman once tell me, "Its not as if you are going to start the crap, you would probably end it though..."
(5)
Comment
(0)

Cpl Brett Wagner
10 mo
Sure why not? I’m completely secure in my manhood and my womanhood.CSM Charles Hayden
(0)
Reply
(0)
Show More Comments
Read This Next
RallyPoint Home