Do you think the Biden Administration will come to the defense of Taiwan if it is invaded by The People's Republic of China? 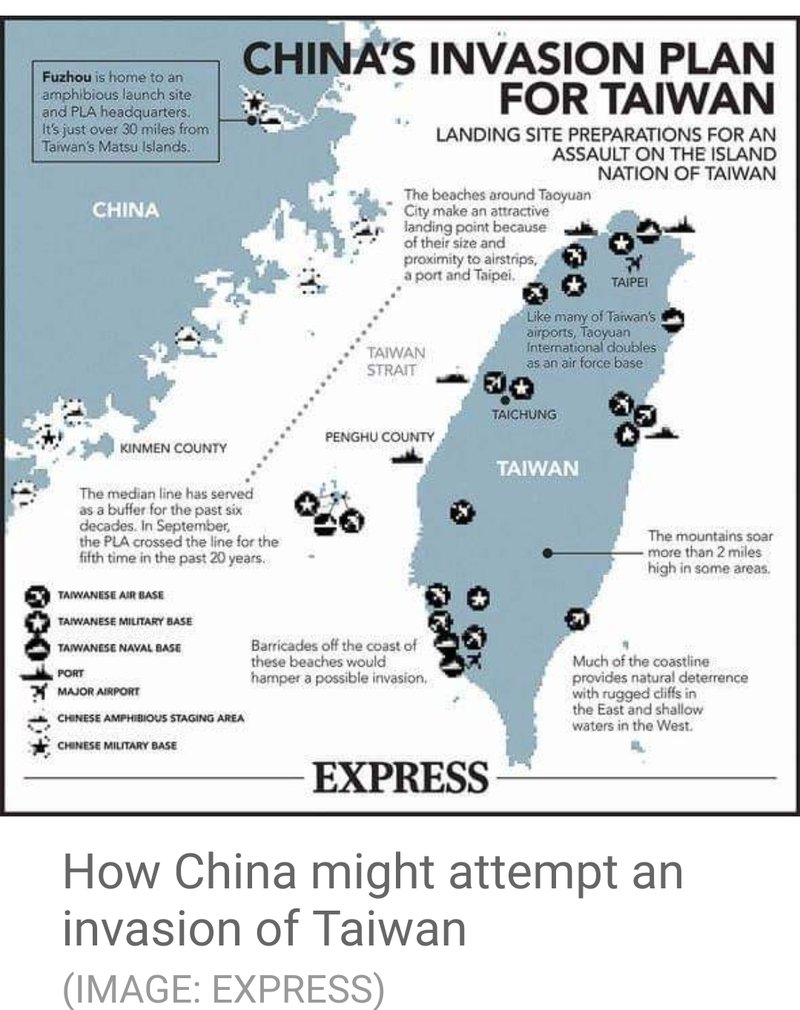 We have seen is coming for the last 10 years. China is now building its 4th aircraft Carrier. In my opinion, they want to confront or spoil a counter-attack by the United States by placing 4 aircraft carriers as a screen to keep us out while Taiwan uses its 800 javelin missiles and its older M-60 A3 tanks and other weaponry to stall the people's Republic of China's forces on the beach and in the interior while we mobilize and hopefully come to their aid. If we do not, we will let Taiwan go down in history to defeat. At the end of WW2, Mainland China was Nationalist and its military was strong from US advisors training whole Chinese Nationalist Divisions in preparation to defeat the Japanese. After the war ended, The Nationalist Armies were slowly defeated by the Communists and Former General/Secretary George Marshall hated Chang Kai Shek and he did not support the Nationalists with additional arms and ammunition while Russia was giving captured Japanese weapons and ammunition to Mao Tse Tung's Army causing the Nationalists to retreat to Taiwan by 1949.

We had a Defense Treaty with Taiwan that expired in 1980. The PRC just took back Hong Kong, I think they will be emboldened by our internal strife from the moment George Floyd died and the cities surrendered to the leftist protests/riots and now the strife from the insurrection of the fringe right group on the Capitol. The impeachment of Former POTUS Trump may be on your minds but remember that China likes our infighting. I hope President Biden sends a show of force like past Presidents have done. Remember, North Vietnam invaded South Vietnam during the tenure of the weak Ford Administration recovering from the Watergate scandal and POTUS Nixon's resignation. My Social Worker Mother spent 3 weeks at Camp Pendleton helping resettle refugees after the fall of Saigon. We do not want a President Obama Faux line in the Sand. We will also find out if Tony Bobulinksi was right. 108 Abrams M1A2 tanks are on order but it will be about 17-25 tanks a year to Taiwan. Hopefully, POTUS does not interfere with the FMS.
Posted in these groups:

SrA John Monette
20 d
Cpl Bernard Bates - I think the majority of Southeast (and the rest of) Asia would come to Taiwan's defense.
(0)
Reply
(0)

SFC Jim Hall
19 d
I hope you are wrong while I believe you are correct. I will be living there for at least a year starting late this year. I fear that if they do attack expats won’t be able to get out. This old decrepit artillery and MP soldier may find himself in combat again. This time as a grunt.
(1)
Reply
(0)

Lt Col Timothy Cassidy-Curtis
15 d
I am not confident about the Current Administration. With that said, the international dynamics will have to consider Japan and South Korea. The takeover of Taiwan by the Mainland will be a direct threat to them.

If there is a conflict, it will require (Mainland) China to expend resources. It will be interesting to see if this drain will be of interest to Russia.
(2)
Reply
(0)

SMSgt Lawrence McCarter
Posted 3 mo ago
The threat to Taiwan has been constant and the weakness and lack of support by Democrats has only made it worse. China seems to get its way the last few decades when the US gives into them which is far too often. The Communist controlled government there is also a threat to the other countries that are in the Asian Continent with constant threats and acts. Its not a threat that is going away and weakness Will help it happen.
(32)
Comment
(0)
show previous comments

CAPT Dave Woodard
7 d
One of the various hypotenuses as to why we were in VN maybe coming true - the domino effect on SEA 9and by extension Australia). New Zealand is already voicing their concerns
(1)
Reply
(0)

SMSgt Lawrence McCarter
7 d
CAPT Dave Woodard - Yes, and its becoming apparent its a real reason for concern and a chance to head it off failed by running out on Vietnam with nothing but broken promises to their people. Marist Socialism/Communism continues to spread and that's NOT a good thing.
(1)
Reply
(0)

CAPT Dave Woodard
7 d
autocorrect be damned!!! hypotnesis - not hypotenuses - not a geometry lesson for sure
(1)
Reply
(0)

SGT Mustafa Stokely
7 d
Fiat currencies rely on make-believe to exist, and in this way, China provided many billions of needed dollars to the US, to help sustain this facade. I think Democrats and Republicans alike often caved into Chinese demands to keep them buying US Treasury Bonds, and other financial instruments. This is far from a black-and-white situation. China was also actively resisting Russian efforts to destabilize the US dollar, and this, too, came at a price.
(1)
Reply
(0)

SSG Robert Perrotto
Edited 3 mo ago
Posted 3 mo ago
Unless the world recognizes Taiwan as an independent country, which they will not, then any actions China takes against it, as a rogue province, will be legitimate. Taiwan is technically a province of China, and any foreign interference in what amounts to be an internal matter would be met with strong political opposition at the least, and possible armed resistance from China. Can we defeat China if they decide to make a military strike, I do not know. 4 carriers, and mainland air support would be a tough nut to crack. And sinking a Carrier would escalate the conflict beyond a small local conflict, into a regional one, and forces in Japan and S. Korea would be a viable and legitimate Target for China. China does not have to "win" a conflict involving us in this, just make the price we would be paying high enough to garner opposition within our political structure, and erode our political will to continue.

History gives us a lesson to study similar to this. The Korean conflict in 1950, and what happened when Thousands of Chinese "Volunteers" came to the aid of North Korea, and where nearly successful in driving a 50 country UN backed force back into the Sea.
(22)
Comment
(0)
show previous comments

SFC (Join to see)
12 d
Actually taiwan is the Reminence of the original republic of china. Raiwan is the true china. The communist china is who is illegitimate
(1)
Reply
(0)

SSG Robert Perrotto
12 d
SFC (Join to see) - By that Logic - our government is illegitimate. Seriously, they had a civil war to determine their political structure, Just because we do not like the winner of that civil war, in which the Chinese people themselves determined, does not make them illegitimate.
(0)
Reply
(0)

SFC (Join to see)
12 d
No because we kicked the british out after they surrendered to us, and england recognized the united states SSG Robert Perrotto
(0)
Reply
(0)

SSG Robert Perrotto
12 d
SFC (Join to see) - Ok - now take that further - Mao kicked out the nationalists from mainland china to Formosa, that war never ended, much like the war between North and South Korea has never ended, it is just sitting in a ceasefire for the time being.

Majority of the world recognizes the CCP as the legitimate government of China, The United States recognized the CCP in 1978, and ceded that Taiwan is part of China, not a separate country, Taiwan has never declared independence from China. The United States and it's allies do not recognize the nationalists as the legitimate government, Taiwan does not sit on any world political gathering of countries, and China has always had a legitimate claim upon the island, hence it's return to China after the end of world war 2. How you feel about that government is irrelevant, what is relevant is that China has claimed Taiwan, and the world, has ceded Taiwan to China long ago, and it is just a matter of time before the CCP finishes it. There is no scenario where Taiwan becomes legitimately independent. Doing so will provoke China - understand that this situation is a mask, one in which the Chinese Government agrees to wear until a time of their choosing.
(0)
Reply
(0)
Show More Comments
Read This Next
RallyPoint Home