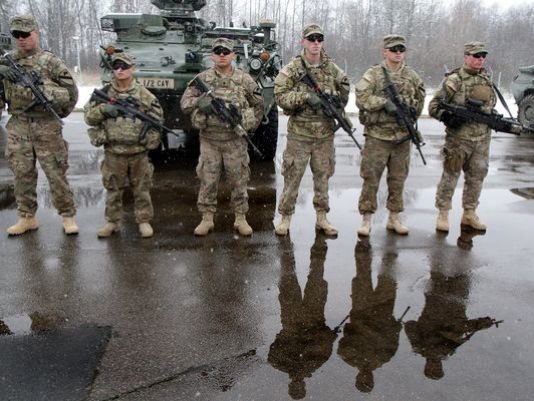 U.S. military bases in Europe will heighten their security precautions in response to recent terrorist attacks and plots in France, Belgium and Germany.

"We continually assess threats to our forces with and alongside our host-nation counterparts and take appropriate measures based on those assessments," Hicks told Stars and Stripes.

Hicks did not say what these new protocols would be, or offer a threat assessment in the European area of responsibility, Stars and Stripes said.

Additional security protocols at military installations were not immediately carried out after three masked men armed with automatic rifles killed 12 people and wounded 11 others in an attack Jan. 7 on the French satirical newspaper Charlie Hedbo.

At the time, Hicks told Military Times that European Command had already taken a number of steps meant to protect troops and their families.

In November, EUCOM told troops not to wear their uniforms off base unless commuting to or from work.

"In addition, all personnel should review individual social media account security and geo-location functions/settings to ensure their profiles are not overly revealing," according to a Nov. 10 EUCOM directive.

Hicks said earlier this month the security measures implemented in November were not related to Islamic State threats, but did not specify why the threat the security precautions increased.

http://www.armytimes.com/story/military/pentagon/2015/01/22/military-bases-in-europe-to-increase-security-protocols/22150029/
Posted in these groups: EUCOM

Capt Richard P.
>1 y
Which is actually a beautiful illustration of the nonsensical policy that was probably implemented truly: telling service-member to 'be more alert' and 'keep a low profile' and asking whichever civilian police agency or limited military police or security element is actually authorized to carry live rounds to be more aware.

I know I'm a broken record, but there's a reason:
https://www.rallypoint.com/answers/arm-the-armed-forces

CPT Zachary Brooks
Posted >1 y ago
Increased security is good, but I still wonder, why are we still there?
(2)
Comment
(0)

MGySgt Jeremy Moore
Posted 4 y ago
is thules in this group?
(0)
Comment
(0)
Show More Comments
Read This Next
RallyPoint Home