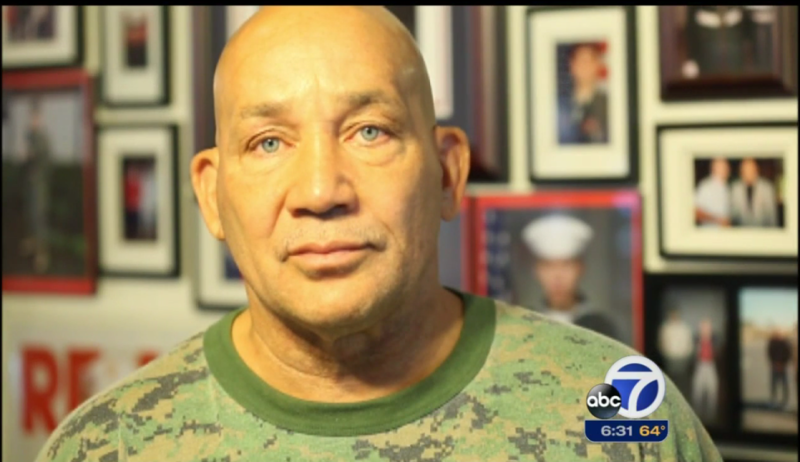 From: ABC 7 News
--
SAN RAFAEL, Calif. (KGO) -- The ABC7 News I-Team is investigating how poorly a Marin County gym owner treated some of the young men who came to him for training. Greg Allen shut down his business in May after the I-Team revealed he lied about being a military hero and that the FBI is investigating possible criminal charges.

Allen put himself out there as a war hero and a former Marine drill instructor who knew how to get someone in shape. But the real professionals tell the I-Team that some of what Allen did at his gym was abusive and dangerous.

Joey Lazor is heading off to college soon, but he was just starting his freshman year of high school when he went to San Rafael's House of Steel. His dad thought it would toughen him up. At 4 a.m. on a school day, Lazor made the mistake of looking gym owner Allen in the eye.

Even though Allen's actual military records show no active duty, just eight months in the Navy before a medical discharge, he demanded respect as a war hero, as seen in a video obtained by 20/20.

Allen wore a rack of phony medals, including a Purple Heart and Bronze Star with "V" for valor. He also lied about being a Recon Marine, a sniper with two tours in Vietnam.

Kris Hardy also worked out at House of Steel and he tells the I-Team, "He was talking about like they made a movie about him called 'Sniper' and stuff like this."

Allen inspired such admiration in the young men he trained, several got big tattoos like one that reads: House of Steel -- Lt. Greg Allen.

"I would feel like I got duped if I got that tattoo and found out that this guy was a fraud," says 1st Sergeant Christian Bull, a real Marine drill instructor.

The I-Team asked Bull to analyze Allen's training techniques. The House of Steel workouts were very tough, especially for beginners like Lazor on that first day.

"And I remember trying to do, you had to do 100 pushups," Lazor said. "And if you didn't, you had to start over. And I could not get past the pushups."

Bull explains, "And you can hurt somebody like that. That's exactly how you're going to hurt them. How can I train somebody if I don't know their ability?"

Later that morning, Lazor said Allen held a hose over kids' faces, as they lay outside on the ground.

"You have to scream like non-stop, otherwise the water goes in your mouth and the only way to prevent yourself from choking is to, is just to keep screaming cause as soon as the water gets into your mouth you start choking and then it's just a disaster," he said.

Several sources told the I-Team that Allen often used that technique with the hose.

Bull: "That sounds like something you would do in some kind of POW camp."
Noyes: "Do you use water in any way besides to hydrate, besides a healthy way?"
Bull: "Absolutely not."

Kris Hardy told the I-Team that Allen and his squad leaders sometimes used drinking water as punishment and that in one session, while running laps in a parking lot, he downed 10 bottles.

Hardy says one of Allen's squad leaders made him do pushups in the mess.

"What kind of person would make somebody else do pushups in their own vomit?" Bull said. "To me, I don't see how the guy slept at night."

Bull says Allen seems to have made up training techniques of what he thought Marines might do because he never attended boot camp himself. Bull is upset about what Allen did in the name of the U.S. Marine Corps.

"It absolutely infuriates me because to me that's un-American," he said. "You don't do stuff like that. We are a nation that's built on honesty, integrity, commitment, dedication. These words, they have meaning. When we say things they mean something."

Some young men now serving in the military credit Allen's training with giving them a head start before boot camp.

The I-Team spoke with Simon Duvall, a Reconaissance Marine, when he was in the Philippines for a joint exercise."

Getting in shape, a lot of running, a lot of calisthenics, lifting," he said. "It definitely prepared me, gave me an upper edge."

Duvall was stunned when the I-Team broke the news to him that Allen is a fake. Bull said that with all the effort Allen put in, he could have become a real Marine and wouldn't have had to lie about it.

After the first I-Team report in May, Allen shut down the House of Steel. Two weeks ago, we saw a crew patching the walls at the gym and preparing for new tenants.

Allen did not return the I-Team's calls or texts, but we did reach his lawyer who would not comment for this report. The Marine Corps has banned Allen from all functions and facilities and now forbids any Marines from working out with him. The I-Team will keep tabs on the FBI investigation and will let you know the outcome.

http://abc7news.com/careers/i-team-fake-marin-county-marine-accused-of-abusive-training/876370/
Posted in these groups:

1stSgt (Join to see)
Edited >1 y ago
Posted >1 y ago
Can anyone spell fucking douche bag. He needs to have his bullying ass beat into the pavement.
(19)
Comment
(0)

Sgt David G Duchesneau
>1 y
You got everything just as it should be! Looking good 1stSgt, looking real good!
(0)
Reply
(0)

SN (Join to see)
>1 y
who gives a crap about spelling, people, this is about jerk offs pretending to be hard working military.
(4)
Reply
(0)

SSG (Join to see)
Posted >1 y ago
As an NCO and Active Duty soldier, this man is a slap in the face to all the good men serving honorably. 8 months in the Navy and couldn't hack it. No further comment.
(6)
Comment
(0)

Sgt David G Duchesneau
Posted >1 y ago
What an ass wipe! He is nothing but a soup sandwich!
(6)
Comment
(0)
Show More Comments
Read This Next
RallyPoint Home