General Dunford: Potent infantry essential to 'balanced' military portfolio. Do you agree/disagree? Why? 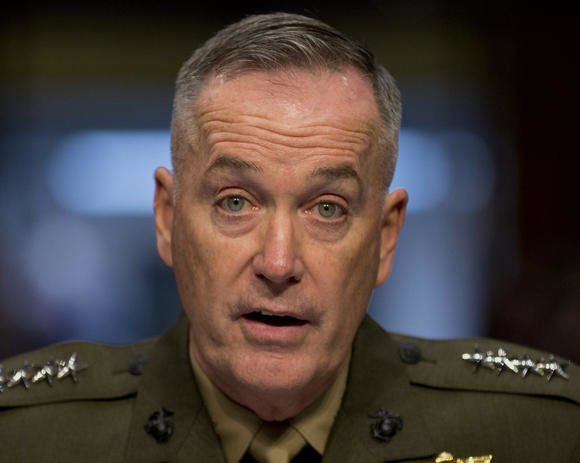 Rather, the general said during his confirmation hearing Thursday on Capitol Hill, planning for future threats requires a "balanced inventory of capabilities."

Dunford addressed the issue in response to a question from Sen. Tom Cotton, an Arkansas Republican and Army veteran who served as an infantry officer in Iraq and Afghanistan. Dunford, who if confirmed will become only the second Marine to hold the military's top post, also is an infantry officer by training.

After a briefly awkward exchange in which Cotton appeared to prod Dunford about the origin of his nickname, "Fighting Joe," the senator asked the general whether he worries tomorrow's infantry forces — namely soldiers and Marines — will go under resourced as the country pumps billions of dollars into the development of next-generation weapons systems such as the long-range strike bomber, the F-35 Joint Strike Fighter and a new ballistic missile submarine.

"I am concerned," Dunford responded, noting also that he doesn't self apply his nickname. "And I think it's broader than just the infantry piece. Experience tells us we need a balanced inventory of capabilities and capacities in joint force to be successful. ... What concerns me are people who actually think they know what the future is going to look like because, our experience tells us, we don't. So having a full range of capabilities that includes having effective Marines and soldiers, from my perspective, is the prudent thing to do."

http://www.militarytimes.com/story/military/tech/2015/07/11/video-joseph-dunford-says-infantry-essential-to-united-states-military-portfolio/30013701/
Posted in these groups:

LTC Stephen C.
Edited 5 y ago
Posted 5 y ago
I totally agree, GySgt Wayne A. Ekblad. Smarter men than me have made such an assessment as well. Here are GEN George S. Patton's thoughts on the subject:
"It’s the unconquerable soul of man, not the nature of the weapon he uses, that insures victory."
"The soldier is the army."
"Wars might be fought with weapons, but they are won by men. It is the spirit of the men who leads that gains the victory."
"...many, who should know better, think that wars can be decided by soulless machines, rather than by the blood and anguish of brave men."
CPT (Join to see) COL Jean (John) F. B. LTC Stephen F. MAJ Ken Landgren
(8)
Comment
(0)

CPT Chase Sanger
5 y
Excellent quotes, Sir LTC Stephen C. . Patton is my absolute favorite historical figure. It really is a shame that he was killed in that freak car accident. Who knows what he would have gone on to do otherwise
(2)
Reply
(0)

CPT (Join to see)
Edited 5 y ago
Posted 5 y ago
The infantry will be the ones that toe the line with diplomacy fails. I am not a fan of losing troops but we need to choose wisely. Infantry should be the last resort. We need to maintain a potent and lethal ground force. Soldiers say that they did the same job as infantry when they deployed. That maybe true but it wasn't for their skills they were sent to perform those missions. It was for the lack of infantrymen. I am glad the Army is adding a third maneuver battalion to each of the BCTs. I didn't think the BCTs were composed of enough fighting soldiers. We need to be prepared for just about anything. As we have seen we didn't see ISIS coming. We didn't know how a lot of these situations would be playing out. We should be building an Army for what could possible happen and not an Army for what we think will happen.

It blows my mind how much money we dump in the F-35. We could sell two of them and add a Division in the Army for the cost. The Army is taking a beating in this budget war.
(5)
Comment
(0)
show previous comments

1LT William Clardy
5 y
"You can bomb all you want, but you don't control a piece of ground until you can stand a 19-year-old with a rifle and bayonet on it."

1LT William Clardy
5 y
CPT Chase Sanger, that's one of those pithy quotes that get attributed to Anon E. Mouse. You'll find minor variations of it just about anywhere folks with an Army (or Marine) background are discussing the wisdom/practicality/efficacy of an overseas military adventure -- especially one where there is a desire to avoid "boots on the ground" by means of "shock and awe" or "precision air strikes".
(2)
Reply
(0)

PO3 David Fries
Posted 5 y ago
There have been boots on the ground in every conflict since the beginning of time, and there always will be.
(3)
Comment
(0)
Show More Comments
Read This Next
RallyPoint Home