I served for 8 years and I never deployed. I don't feel like I earn the credit of veteran. Does anyone else feel that way? 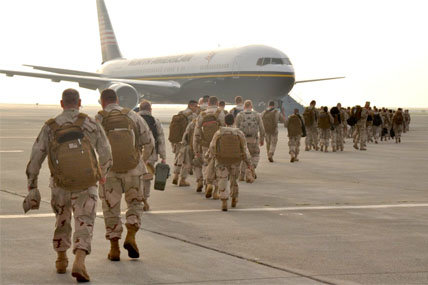 SN Greg Wright
Edited 5 y ago
Posted 5 y ago
Dude, no one that ever DID deploy did it without the help of people who didn't. We ALL signed the same blank check for Uncle Sam. Just because he didn't cash yours doesn't make it less valuable. Go watch the youtube video of the Army cook who, in the middle of cooking dinner, came under fire, ran and returned fire, then went back and flipped his steaks. You are a veteran, Brother.
(106)
Comment
(0)

Capt Chris McVeigh
Posted 5 y ago
There is a difference between not deploying and actively avoiding deployments. I tried to, but never made it over to Iraq/Afghanistan due to operational demands. On the flip side, if deployments came up but you intentionally skated around them, yeah I'd probably think less of you.

As long as you served and did what was asked of you for those 8 years, then it doesn't matter what part of the world you did your job.
(87)
Comment
(0)
show previous comments

SSgt Ron Breier
2 y
Taking the oath and serving your country is WHAT COUNTS. You do not know when you write that check for your ass whether or not your government is going to cash that check or not. Often it's the luck of the draw on where you are deployed.
(3)
Reply
(0)

CPT William Jones
12 mo
The term deployed means a person was sent outside the USA. Deployed in other words. Some nice deployments so not so much but all still deployed. I was deployed 4times continuously 32 months in RVN bracketing about 10 months in Germany.
(1)
Reply
(0)

CPO (Join to see)
Edited 5 y ago
Posted 5 y ago
If you served your country honorably, especially for 8 years, you earned that title. Wear it with honor and pride, brother. We all scarified something, whether it was for a day or a career, deployed or stateside. "All gave some, some gave all" remember that. We all signed on the dotted line that said we would be willing to give everything up to and including our lives.
(76)
Comment
(0)
show previous comments

SFC (Join to see)
5 y
Dont let it bother you. You gave up your civilian life so you can stand ready for our country needs you. Your service may not be a deployment role, but you do help those who are out there, and they couldnt do their job without you.
(8)
Reply
(0)

PFC Don Jenks
2 y
Sgt J Steven Sondag thank you for your service! You signed that dotted line to give everything.
(2)
Reply
(0)

MSgt Gilbert Jones
1 y
Sgt J Steven Sondag - You should feel bad, I was one of those AF members that covered for you - sent there three times because I carried dual AFSC. After returning to the states I would process into personnel and by the time I finished processing I would have an IBM card indicating I was going back in 12 months. One time I replaced my replacement. Just joking about being sorry. Wish I could have gotten an assignment to Europe, almost made it in1968, had orders for Torrejon AB, Spain, but was canceled because the Status of Forces Agreement wasn't renewed. Oh well that's life!
(0)
Reply
(0)
Show More Comments
Read This Next
RallyPoint Home