Is it ever okay not to change something because "that's the way it's always be done"? 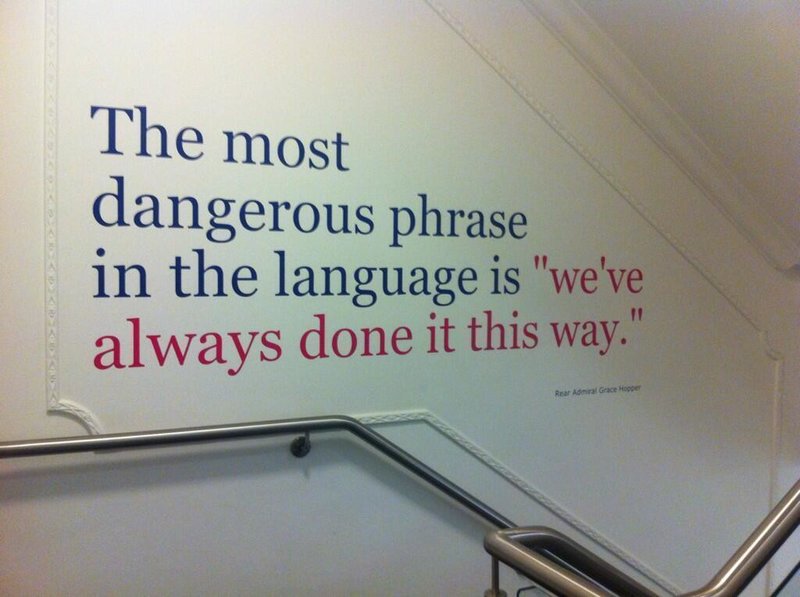 While checking my networks this morning, I came across this image shared by a contact I have on LinkedIn. It hit me pretty hard today because at my work, a lot of my coworkers will say that things don't need to change because that's the way we have always done things.
And here on RallyPoint, I keep reading about the changes, positive or negative that the military is going through and how some people view these changes.
So the question I have is, is it ever okay not to change something because "that's the way it's always be done"?
Posted in these groups:

SPC Joshua Meadows
Posted 6 y ago
Maybe it's okay to leave some things the way they are because that's what you're used to, but what is the harm in trying something new just to see what happens. If it sucks, then it is not difficult to go back to the way things were, at least until someone thinks of a new idea. You might be shooting down the greatest thing since sliced bread and you wouldn't even know it if you didn't at least give it a chance.
(1)
Comment
(0)

SGT Ben Keen
6 y
Totally agree with you. If you try something and it doesn't work, just rollback your plan.
(0)
Reply
(0)

COL (Join to see)
6 y
The problem with "just try something" is that it causes a lot of organizational churn. People have to learn new skills, new supplies need to be ordered, new QA checks put in place, etc. Oh yeah, and now you need a legacy system to account for the differences between the "old" and "new" work that is still in flight or may need to be referenced in the future.

It doesn't work -Then they all have to be dismantled. But now you need a NEW legacy system to account for the "old new" and "old old" processes. And need to retrain people, and establish new logistics tails, etc.

It IS difficult to go back in an organization of any size. (read our retirement rules sometime, or the numbers of "points" a reservist can acquire in a given year over their career, or whether SMP time counts, or our arcane pay & allowances system, etc.)

I used to have arguments with many of the civilian workers on post and I was active when I was trying to take care of troops, I would get this statement many times when errors or unnecessary red tape was delaying things from being done, and my response was always "just because it has always been done that way doesn't mean it is right and how it is supposed to be done." I used to ruffle a lot of feathers that way and my COC used to get lots of phone calls on me, but their first response to them was, "was he disrespectful, "no", was he tactful, "yes", was he right, "that's not the point," and the convo usually ended there.

Many people who have been doing a job a long time like to use this excuse to keep from progressing and moving forward.

SSG Jay OConnor
Posted 6 y ago
I believe that sometimes you should not fix what is not broke. Sometimes there are things in place simply because it has been a proud tradition for many, many years. 82nd ABN is riddled with tradition and without them, it wouldn't mean as much.
(0)
Comment
(0)

SGT Ben Keen
6 y
I think there is a huge gap between what is a tradition and letting things go because it's the "way we always done it". What I was getting it at was those that don't want to improve something when it is not working at 100% because its the way we have always done it. For example, here at work, I have to do maintenance on our main enterprise server. This server controls 90% of our daily function and when I have to do this maintenance, it brings this system down. Before I got here, they were doing this maintenance and it would take 48 - 72 hours to complete. When I got here, I looked at the process and figured out they been doing it wrong for a long time. I approached my boss, outlined my plan and even though she kept saying "but its the way we always done it"; I was allowed to try my way. With the improvements I made, this 48 - 72 hours process has been reduced to only a few hours. If I would have taken the answer of "its how we always done it", I would still be doing the process in the wrong, time consuming way.

Keep traditions yes, but don't let a bad process go unchanged because its how it has always been done.
(0)
Reply
(0)
Show More Comments
Read This Next
RallyPoint Home