Is it legal for a Dept of Army Civilian (GS10-15) to demand and expect a Soldier, lets say a Sr. NCO or a Jr. Officer, to do push-ups? 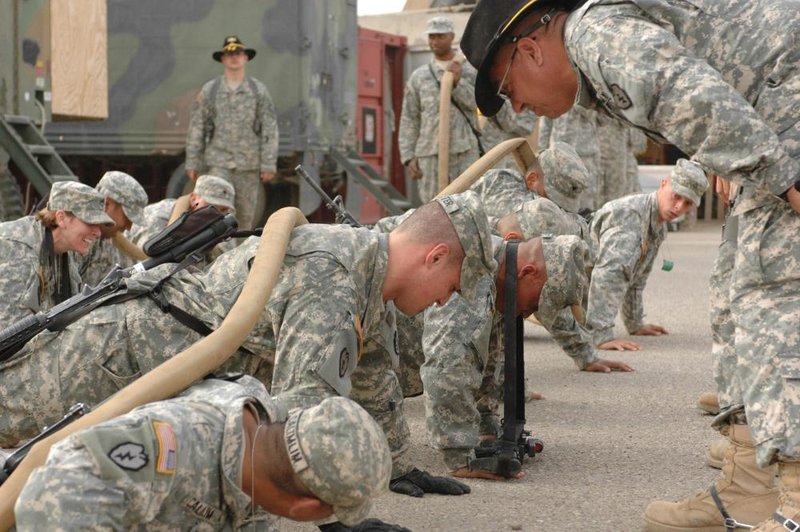 SPC Richard Munden
1 mo
"Indiscipline" can mean almost anything. Bad job performance? Lack of discipline. Uniform fucked up? Indiscipline. Late? Talked shit to the 1st Sergeant? Didn't shave?
Seriously, they used that particular word for a reason. It's a weasel word, meant to lend NCOs and officers a means of using physical training as corrective discipline in almost any circumstance.
(1)
Reply
(0)

LtCol William Bentley
27 d
A1C Samuel Leggett - Air Force Instruction 34-1201, Protocol, of 18 August 2020, as a lawful order, requires the hand salute or other appropriate salute to not only the civilian President, but the Vice President, the SecDef, and each of the Service Secretaries. Of course, members of the National Guard will salute their own civilian chain of command based upon not only the AFI, but their State's military regulations. See par. 8.1 on page 60, https://static.e-publishing.af.mil/production/1/af_a1/publication/afi34-1201/afi34-1201.pdf:

"Chapter 8
CUSTOMS AND COURTESIES
8.1. Hand Salutes.
8.1.1. The hand salute is a form of military greeting, recognition and respect. See Figure 8.1 for reference. Salutes shall be rendered by all military Airmen when in uniform to:
8.1.1.1. The President and Vice President of the United States (T-0).
8.1.1.2. The Secretary of Defense and Service Secretaries (T-0).
8.1.1.3. To officers of the U.S. Armed Forces (Army, Navy, Air Force, Marine Corps,
Coast Guard). See Attachment 9 for recognition of Department of Defense
commissioned officer ranks. (T-0).
8.1.1.4. To officers of the U.S. Uniformed Services (National Oceanic and Atmospheric
Administration and the Public Health Service). (T-0).
8.1.1.5. To officers of friendly Foreign Nations. (T-0)."

Sgt Ed Allen
26 d
I worked in a similar situation. in 1986, while at the MCCDPA in Kansas City, MO, it was a 9 civilians to every 1 Marine. My section was head up by a full of himself G12. While he didn't try to administer punishment, he did order all Marines and civilians to work on MLK day. That was the first MLK that the federal government honored. It was purportedly for training but, in reality, was a way to get extra pay for all the civilians. The Marines lost a day off so that the civilians could pad their wallets.

It is one of the primary reasons that I never applied for, nor ever will, a GS position.

He and I didn't get along so he gave me a substandard fitness report. Never made SSGT due to the politics involved.
(0)
Reply
(0)

Maj John Bell
Posted 3 y ago
On Embassy Duty, as the Company "F" OpsO, I had a State Department General Services Officer (sort of the embassy S-4) tell me he was the equivalent of a Brigadier General and demand that I stand at attention when I addressed him and render a hand salute upon arrival or departure of his presence. The Ambassador (a Former Marine Artillery Officer) and I laughed so hard we couldn't breathe. When the Ambassador could finally speak, he said "Not even in pay grade... dumbass." Then we laughed some more.
(882)
Comment
(0)
show previous comments

CW2 Chris Wilson
1 mo
A GSO being an O7 equivalent is unlikely at post, but not impossible at exceptionally large embassies, such as Baghdad. It is possible for a GSO track officer to reach that pay grade, however within the senior foreign service pay scale, it is referred to as OC. A GSO who is an OC in pay grade is more likely in a position at main state. But it is not unusual for an embassy to have numerous officers who are equivalent in grade to GO/Flag ranks, however it is rarely the GSO and more likely a political officer or DCM. It's also possible for a staff officer to be higher in grade than the ambassador, but not common. I had a tour at a post where that was the case. Unlike the military, in the foreign service, positional rank is not congruent to pay grade. Nevertheless, the ambassador, regardless of their pay grade, is equivalent by position to an O10 for protocol purposes as they are the direct representative of the president. Incidentally, the Defense Attaché, often an O5 or O6, is equivalent to an O8 for protocol purposes in some countries. Suffice it to say, pay grades aside, there is no comparison in reach of responsibility and authority of a brigadier general and a civilian SES or SFS grade equivalent.
(1)
Reply
(0)

Col Joseph Lenertz
Posted 3 y ago
From my operational background (not legal, not a JAG), the legal requirement to obey legal orders given by superior commissioned officers is well known and established. A GS civilian is not a superior commissioned officer, and is not in the direct chain of command. The only situation where I could imagine a GS civilian having any authority to direct even one push-up would be a doctor or nurse during an examination following an injury to determine readiness, or during physical therapy, but even then these would be considered medical advice and not orders. If you failed to follow medical advice and as a result you harmed yourself or prevented recovery, then your commander could legally punish you, but that's about as close as I can imagine.
(664)
Comment
(0)
show previous comments

SSG Paul Headlee
1 mo
MSgt Paul Sillars To go with the simulated authority? Wish I could have been there!
(0)
Reply
(0)

LT Robin McPeters
1 mo
I agree with the JAG, but can see one additional scenario. With all the contract workers replacing active duty. It could be possible for a civilian contractor to be an instructor at a school where pushups, either for exercise or punishment, are a part of the ciricula. In a case like this, the command would have to grant these special, limited powers, with strict criteria for employment on an individual basis.
(0)
Reply
(0)

1SG Joseph Dartey
28 d
Oh hell no Lt Robin McPeters. As 1SG Stephen Burgess put it, "I would put a boot in any civilian's (GS) ass that would try and make me or any of my soldiers do any push-ups."
(0)
Reply
(0)

PO2 Jerry Van Ness
27 d
I've been out of the service for many years, but I can't imagine a way to demoralize an active duty military person more than have a civilian allowed to discipline him.
(0)
Reply
(0)
Show More Comments
Read This Next
RallyPoint Home