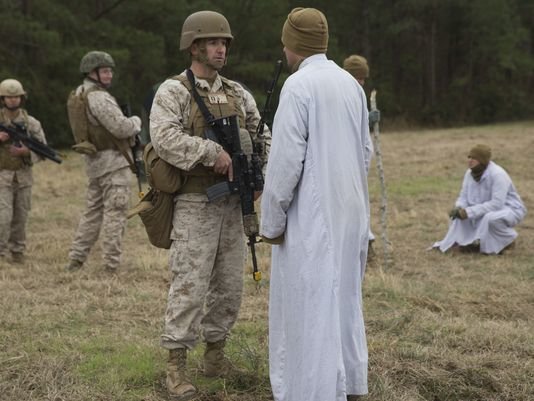 Just months after marking the end of the Corps' combat operations in Afghanistan, officials revealed that Marines are headed back into the war-torn country, but details of the deployment remain scarce.

The disclosure came in a Marine Corps news release outlining preparations being made by 2nd Air Naval Gunfire Liaison Company aboard Camp Lejeune, North Carolina, in December. The company tested its Supporting Arms Liaison Team Alpha's readiness for an upcoming deployment to Afghanistan by tackling various "real-life" scenarios between Dec. 8 and 11, according to the release.

The Marines will be responsible for "security operations" in Afghanistan, according to the release. To prepare, they were "tested on their reaction to different insurgency situations such as counter improvised explosive device patrols and investigating the origin of enemy fire," the release states.

"This was a very good chance for them to exhibit their skill sets. They were evaluated on their ability to meet training readiness standards, which they did," said Lt. Col. Christopher D. Roberson, the unit's commanding officer, in a statement. "There are some areas that can be improved moving forward, but overall they did really well."

Outside of the news release, Marine Corps officials declined to discuss 2nd ANGLICO's upcoming deployment. Citing operational security, a spokesman for II Marine Expeditionary Force declined to specify when — and for how long — the unit would be deployed, where within Afghanistan it will operate and whether other Marine units will accompany it.

The Corps exited Afghanistan in October, handing Camp Leatherneck over to local soldiers before departing with British troops. The turnover marked an end to the Corps' 13-year war in Afghanistan that saw thousands of Marines rotate through the country while suffering hundreds of casualties.

Brig. Gen. Daniel Yoo, then commander of Marine Expeditionary Brigade-Afghanistan, told Marine Corps Times the exchange brought an end to regular missions for the Corps in the country. Still, he indicated Marine Corps Forces Special Operations Command may continue to play a role there.

Though the Marines formally left Afghanistan, U.S. and coalition troops are expected to maintain a presence in the country through the end of 2016. Those service members will focus on training local troops and police as the withdrawal continues.

It's unclear when Marines with Supporting Arms Liaison Team Alpha will depart, but officials did say the unit's next stop is Germany. There they will train alongside Georgian troops before heading to Afghanistan.

Though the Corps news release suggests the Georgians will accompany the gunfire liaison company to Afghanistan, officials declined to elaborate.

http://www.marinecorpstimes.com/story/military/careers/2015/01/06/marines-return-to-afghanistan/21333887/
Posted in these groups: