Military Tattoo Policy: Do the rules and regulations keep warfighters from being unprofessional or are the policies outdated? 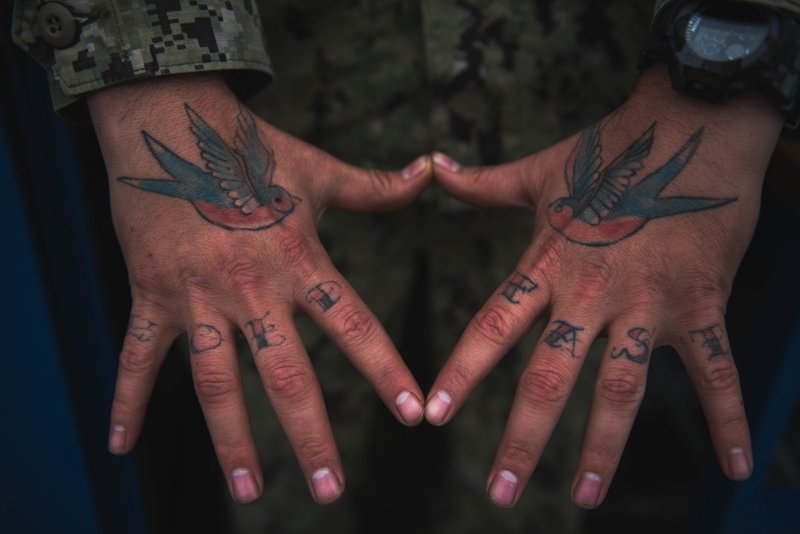 In my personal opinion, servicemembers should be able to have as many tattoos as they desire. Tattoos do not make make the servicemember less professional, they're something we do out of personal expression and a way to commemorate meaningful things. With the current state of the world being as it is, shouldn't the military be more accepting of all cultures and individualities of the servicemember? Diversity and inclusion is a priority for most businesses and is currently a huge priority within the military. That's all well and great yes, but how does a servicemember having a sleeve tattoo or hand tattoos affect mission success? It doesn't. Does having a tattoo on my index finger impede my ability as a trigger puller? No it doesn't. If i have a sleeve tattoo, does that stop me from carrying my buddy off the battlefield? Nope, I can still carry them.

Just my thoughts. What do you think?

These opinions are my own and are not to be reflective of the USMC or DOD
Posted in these groups:

SSG Samuel Kermon
Posted 1 mo ago
You raise an interesting question. I, personally, don't have any tattoos, don't want one. Many, many Marines I served with did have at least one, several had more. The tattoo had to be completely coverable and that seemed to be about it. Today many more people accept tattoos as no big deal. So I cannot answer except as an opinion. Here it is: have your tats, as long as it is not visible so as to prevent an uniform and professional appearance.
(19)
Comment
(0)

Lt Col Timothy Parker, DBA
1 mo
I agree with this position and would add that the intent of uniformity in the military may be to prevent in-groups and out-groups within the ranks. I would suggest tattoos that are not generally visible would be okay as long as they are personal choices and not associated with undesirable groups (whatever that means).
(3)
Reply
(0)

CPO James Soper
1 mo
I would agree with your statement. I do have 2 tattoos and they are for my pleasure and no one else's. They are where they cannot be seem in any uniform.
(0)
Reply
(0)

SFC (Join to see)
Edited 1 mo ago
Posted 1 mo ago
I think the issue comes down to perception. Perception of the military by the populace. Think about it, in the civilian job market, it is the perception of visible tattoos that will get the sans tattoo person a better shot at a job than someone with tats. Especially if they are distinctly visible on the hands and/or face. Some folks just don't want the general populace perceiving us military folk as mindless ruffians, hooligans and heathens because of visible tattoos. People see tats (especially facial) and instantly think uneducated. But, this is just my opinion.
(14)
Comment
(0)

Sgt Timothy Prevost
1 mo
No I totally understand that but we as a society are moving away from the perception of people with tattoos being mindless ruffians, hooligans and heathens. I think we need to adapt with the times. If a business does not hire you because of tattoos, I imagine that would reflect extremely poorly on that business. As for the perception of being uneducated by having tattoos.... I think the person who perceives that sounds way more uneducated no? If I tell someone they can't do something that is completely harmless and in no way affects their quality of work and performance is that not me already having a specific bias against that something?
(2)
Reply
(0)

CPO William Slifko
1 mo
Sgt Timothy Prevost - The point you seem to be missing in that blatantly visible tattoos that cannot be covered while in uniform/business dress give the appearance of "being mindless ruffians, hooligans and heathens" because there is no cultural identity associated with tattoos and western society. When everyone has a tattoo, the concept of individuality is laughable. That can be directly linked to a person's intellect - think hivemind. It simply becomes an adornment that some people think looks cool or cute. This is no different than bell-bottom pants with the exception of the fact that we could simply throw those out and buy something more sensible. Having spent 23 years in the Navy where there is some cultural norm in getting a tattoo, I chose not to because I wanted to maintain my individuality.
(3)
Reply
(0)

CW3 Harvey Keck
Posted 1 mo ago
Right off the bat -- the "HOLD FAST" tattoo shown is "bassakwards". It was a good reminder to a Sailor up in the rigging, but this version is being broadcast to the public.
I have no tattoos, and I recall that if you don't get one in your first hitch, you are not likely to get one later.
(12)
Comment
(0)

Sgt Jim Belanus
1 mo
I never got one either, my high school best friend spent 20 years in the Navy and put one on his upper arm. Now e's trying to get rid of it. Glad I resisted the temptation
(6)
Reply
(0)

CW3 Harvey Keck
1 mo
Sgt Jim Belanus - I remember one guy I served with, who showed up after a liberty with a tattoo of a black cat leaning on the number "13" about 6" high on his shoulder.
I asked why he got that done to him, and he said he "liked it". I wonder if he still "likes it" all these decades later.
(4)
Reply
(0)

Sgt Jim Belanus
1 mo
it's the thing now especially with girls, 2 out of my 3 have them and one to the extreme, I expressed my disapointment just once, and did remind them what it will take to get them removed, but what does an old vet dad know
(3)
Reply
(0)