My DD214 has a different rank than my OMPF, which one is correct?

CPL Sarah Stilwell
15.8K
69
80
22
22
0
I'm going to the board of corrections on request of my wartime command (discharged for condition not a disability but it turned out my arm was partially paralyzed from a mortar attack in iraq back in 2006). My CDRs found papers stating I was to enter the army as an E3, not an E2. Also my DD214 lists SPC but my ompf states CPL. I was promoted in the field (told to expect CPL but they handed me SPC rank so I thought I was an SPC). I'd like to try and figure out my actual rank before I go to the board cause it's kinda embarrassing not knowing. Would I be owed backpay since I was suppose to be an E3? Does my CPL rank on my OMPF override my SPC rank on my DD214? I served active duty 2004-2006 and my dad who served 23 years said the army had a lot of people coming in and out of the military and likely mishandled paperwork due to understaffing. I was paid as an incoming E2. I appreciate any help.
Posted in these groups:

SPC Elijah J. Henry, MBA
Posted >1 y ago
I had a similar situation in part. If you look at my profile, it shows me getting promoted from E1 to E4 after five months. That is what is shown on my ERB. In reality, I spent 11 months in DEP as an E3, then I showed up to MEPS for OSUT, and they screwed me over saying my BA (which should have given me E4) didn't count and busted me to E1. I went through OSUT and Airborne as a fuzzy. Then I got to Bragg, and the in-processing personnel noticed that my pre-DEP contract said I should be an E3. They promoted me to E3 immediately. A few weeks later, I got promoted to E4 based on my BA. I never got back pay, and my DOR was never backdated. Also, for some strange reason, the E3 part never went on my ERB. Come to think of it, I am not sure if I ever got an E3 LES. Maybe I did, perhaps not. I hope this helps you.
(7)
Comment
(0)
show previous comments

CWO4 Oakley Dean Baldwin
1 y
Sarah, you can try the board, but it is so important to ensure your DD-214 is correct before you leave service. The DD-214 is your official final document. Also, thank you for your service.
(0)
Reply
(0)

SFC (Join to see)
1 y
You should have come in as an E4. Didnt your recruiter and guidance counselor go over your contract???
(0)
Reply
(0)

SPC Elijah J. Henry, MBA
1 y
SFC (Join to see) I should have indeed. My school had just gotten accredited, so I wasn't very confident in the degree for official purposes. Like I said, when I got to MEPS they told me my degree didn't count.
(0)
Reply
(0)

CSM Darieus ZaGara
Posted >1 y ago
You say your command found, do you have copies. Cpl. (in the Army) is not a rank, it is a lateral promotion as they are the same grade. However, if you have orders for CPl. it should impact your records for correction. However, you said you were told to expect CPL and was pinned SPC, so it appears you do not have orders. Of course fight for the PFC, as it may mean money, but doubtful. Never hits to try.
(4)
Comment
(0)

LTC (Join to see)
Posted >1 y ago
Were you locally promoted to CPL? If so when you leave the unit you become a SPC again.
You can apply to have updates to your DD214, they won't change it but they will add a document explaining what changed.

Did You get a CAB? If not, you should apply for one, you need statements from 2 other people at the attack your deployment orders and your DD214. All that goes to a GO for an endorsement and then to HRC to add it to your records. I've helped people get them before.
(3)
Comment
(0)
show previous comments

CPL Sarah Stilwell
>1 y
Thanks. At first they asked for two witness statements from those who 'witnessed the event' (to verify it was hostile fire). Also they say that according to regulations 'other evidence made be used to create a narrative'. We figured we needed to verify the event that took place so when we saw the BC say he couldn't remember if I was injured everyone figured it was enough to verify the event that led to so many others being injured and that my med recs would fill in the gaps under 'other evidence'. But the awards branch never read my medical records because they called back saying they didn't think i had a TBI but i told them it was my shoulder that was injured and they had no clue what I was talking about. The packets were sent about a dozen times but the Army claimed they only received one page (they were loosing everything we sent them) eventually they closed the case and that was it. I was wait listed in the VA for over two years, so I know the feeling. I told them what happened to me and the doctor was skeptical until he saw my shoulder blade sticking out of my back. Then he sent me to a trauma hospital in Tampa and they asked me what happened and I told them, they found my ear nerve was blown out to 29% functioning and my eyes didn't track and my shoulder was collapsed and my arm was about 75% paralyzed. A case worker came in to talk to me and 45 days later I was 100%. They said in my records that the injuries were consistent with having been injuried via blunt force trauma during a 'significant blast' and that my records had no other reasonable explanation for my injuries and that my condition not a disability discharge was 'invalid' in their opinion. My doctor later introduced me to his congressman and asked if I could tell him what happened. I ended up being a piece of a much larger puzzle of discharged soldiers. In 2006 CABs weren't authorized for "indirect fire". Also there were 19 of us in the TMC altogether and it was almost 15 years ago, I doubt they'd remember. My pilot statement said there were casualties in the battalion and that I was one of them (i know its blurry) but it describes the details of what happens. My pilot remember the details but couldn't remember the day. My BC could remember the day but not the details. SO when I submitted both, everyone figured the time day and details would be clear. My BC said it was too long ago to remember if there were casualties in his unit but knew there were casualties that day, he just couldn't be sure if any of them belonged to him. My pilot said there was another soldier in my unit that got a PH in the same attack and he was going to try to see if she could give a statement. My biggest obstacle was that I was 297 yards away when the first mortar hit by me and got everyone's attention. The second hit where my CDRs and pilot were (on the airfield) and blew shrapnel into my unit hanger. So even though I was down the road, there was no doubt that were were being attacked which is why everyone remembers it a decade and a half later. The only thing is that the attack lasted 20-40 minutes and people panicked and ran every possible direction which left a lot of unknown regarding the status of individual soldiers, some ran to bunkers, some hid in container units on the airfield, other refused to come out of their rooms, it was just so chaotic and there were just too many people to account for so I understand that my BC wouldn't be able to account for my status as an individual, but my pilot who I joined up with after running 297 yards was able to. My BC was at another position on the airfield getting shelled like the rest of us. My pilot even said some people thought I was dead when I didn't show up at the meeting point right away (we had prearranged actions in case something like this happened, I was the RTO for the airfield) and he said people were surprised when I got there and had been outside that whole time. He told me a few years back that he wanted to help cause he knew I could've easily stayed where I was, just laid down and called for a medic and nobody would've blamed me. But instead I chose to come back and do my job and he said that was hard for him to forget. so after my PH got rejected they realized they still had enough evidence for a BSM so I was put in for that (its still processing so I don't know what they'd say but I wouldn't be surprised if it comes back an AAM lol)
(0)
Reply
(0)

LTC (Join to see)
>1 y
Indirect fire was always worthy for a CAB but I know many officers made up their own requirements. I recommend submitting for the CAB and PH again. I am willing to help but this also seems like something a congressmen would love to help on because it would be relatively easy for them to get some positive press by getting you awards you earned.
(0)
Reply
(0) 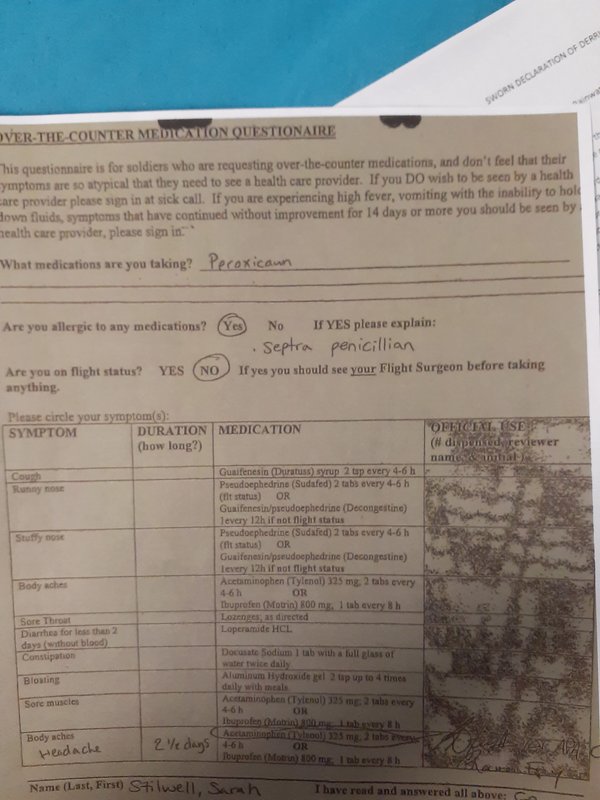 LTC (Join to see) here's one of the field records I turned in. I was given proxicam in August according to my records and told to take it for the remainder of the deployment for long inflammation from sand. The Army argued that it was undated by the medical officer. I was diagnosed with hydrocephalus by the VA, fluid in the brain that occurs in 2/3 of moderate to severe concussions
(0)
Reply
(0)

CPL Sarah Stilwell
>1 y
LTC (Join to see) I can email everything to you this week. Just know that the G1 office has trouble getting things uploaded from my gmail cause I dont have a mil email
(1)
Reply
(0)
Show More Comments
Read This Next
RallyPoint Home