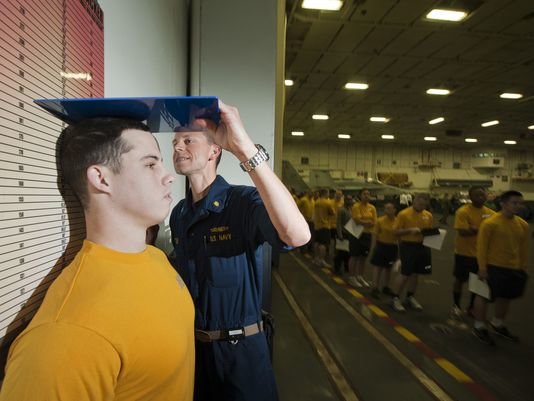 The Navy's body size rules are outdated and unattainable for many, officials say, and the service is on its way to coming up with new ones.

Late last year, the Office of the Chief of Naval Personnel revealed that officials are looking into updating the height-and-weight chart, as well as servicewide ways to encourage and reward outstanding performance on the semi-annual physical fitness assessment.

Roughly one-third of Navy personnel are heavier than the approved height-and-weight standards and must be taped, a senior Navy official told Navy Times on Jan. 27.

"If a third of the force doesn't meet the published height and weight standards, then the accuracy of these charts today needs to be and should be looked at," said the senior official, who asked not to be identified because he wasn't authorized to discuss the subject publicly. "We know that over time, the size and shape of the population has changed, so it makes sense to at least re-evaluate our baseline to ensure it is still valid."

Chief of Naval Personnel Vice Adm. Bill Moran confirmed to Navy Times that he's poised to brief his recommendations to Juan Garcia, the assistant secretary of the Navy for manpower and reserve affairs, followed by Navy Secretary Ray Mabus.

"The BCA, as we understand it, is based on decades-old data," Moran said at a public appearance in February, and the height and weight chart hasn't changed in roughly 30 years, he said.

With fitness trends like weight lifting, and the increased numbers of women in the Navy, it's important to study how body shapes have changed over time, he said.

Currently, male sailors age 40 or younger are allowed 22 percent body fat; older men are allowed 23 percent. For women, limits are 33 percent under age 40, and 34 percent for the rest. That's lower than what the Department of Defense allows — 26 percent for men, 36 percent for women, suggesting it could be within the Navy's prerogative to ease the standards to match those of DoD. Another option would allow higher body fat percentages as sailors get older.

Navy statistics show that during the spring 2013 physical fitness testing cycle, 109,902 sailors, or 30.2 percent of the force, didn't meet the Navy's height and weight chart standards and had to be taped.

Of those, 7,792 failed the tape test, for a failure rate of 7.1 percent for everyone who had to be taped.

Moran is no fan of the height-and-weight standards.

"I will tell you, every weigh-in, I am down to the ounce, just because of the way I am built," Moran said in a spring 2014 interview with Navy Times.

There might also be changes to the tape test, which measures sailors' neck girth in proportion to their waists. Many say the body composition assessment is unfair or too subjective; sailors must pass this and the PRT or they'll fail the cycle. Three failures in four years will get sailors booted out. Dozens of readers have suggested to Navy Times that calipers or a body mass index scale are preferable.

"Bioelectric impedance, which is available in nearly all scales, could be used as a replacement at no, or reduced, cost," wrote Lt. (Dr.) Mark Hauswirth, a Navy flight surgeon, in a January letter to the editor. "Its accuracy is at least comparable, and it has no bias as it does not introduce human error."

Some senior officials agree it's long past time for a change.

"It's amazing to me that with all the leaps in technology that have happened over the past few decades in ships and weapons and aircraft, that we are still testing for body fat the same way we did when I came in the service in the 1980s," the senior official said.

The Navy's Physical Readiness Program Director Bill Moore told Navy Times in 2014 that skippers have a host of incentives — from special mention in the plan of the day to prime parking spots to special liberty — they can give to sailors who score an excellent on the PFA.

CNP spokeswoman Lt. Stephanie Homick confirmed that her office was looking into more ways to reward consistently high performers, but declined to go into more details before the proposals are briefed to leadership.

http://www.navytimes.com/story/military/2015/02/24/navy-physical-fitness-standards-height-weight-update/23731997/
Posted in these groups:

MAJ (Join to see)
Posted 6 y ago
I once saw a headline along the lines of "sitting is the new smoking."

Staying in shape and thin was easier when our jobs had us walking around and lifting things throughout the day... now, its sitting behind a computer and staring at a screen...or sitting in meetings talking about what we saw on our individual screens...

PO1 (Join to see)
Posted 6 y ago
Let me start off with, I am not making excuses. I have never been officially taped in my career. I have been an ACFL, last year to be exact. About 20% of those that were required to be taped were in incredible shape (lifted weights, etc.). Just to show that the taping method is inaccurate I volunteered to be taped a few years ago (officially weighed in at 145; 5'8" - my height can be up to 170). Even though I was well within weight standards, when I was taped it had my BCA over the allowed percentage. I am not saying to make the standards more "lenient" but at least more "accurate."
(3)
Comment
(0)

SSG Gregg Mourizen
11 mo
LOL, I was taped every time during my 23 years. The closest I ever came was 1 pound over the max weight. At my best, I taped out at 12%. My worst? Well let's not go there.
Let's just say, I made it to retirement. Being taped, I would see +/- 5% easy, sometimes as far as 10%. Sometimes within minutes of each other. It all depends on who it taping. Tight enough to make you choke, on the neck while being able to stick your hand through at the waist, is such a "no-go". Peronally, I think the measures should be "Suck it in", "Relaxed", and "Sticking it out" then average, but you would never get that within the required half inch minimum difference.
Unfortunately, the required state is not clearly defined, leaving it to the Regulation Nazi's to come up with their own interpretation. Personally, if I can flex out my neck 2-3 inches, and suck in my gut 6-8 inches, that should say it all. But then that give the qualification power to me, and not to them.
Just sayin'.
(1)
Reply
(0)

SSG Roger Ayscue
9 mo
SSG Gregg Mourizen - I bet, regardless of APFT, the fact that the bullet statement "Within Standards of AR600-9" apeared on your NCOEr indicating you had to be taped was a factor in you not making Sergeant First Class....Although we will never know, because the DA regulations have a built in safety for the board in that they never have to let you see the board results so you can never launch an investigation or question the ALMIGHTY D.A.
(0)
Reply
(0) 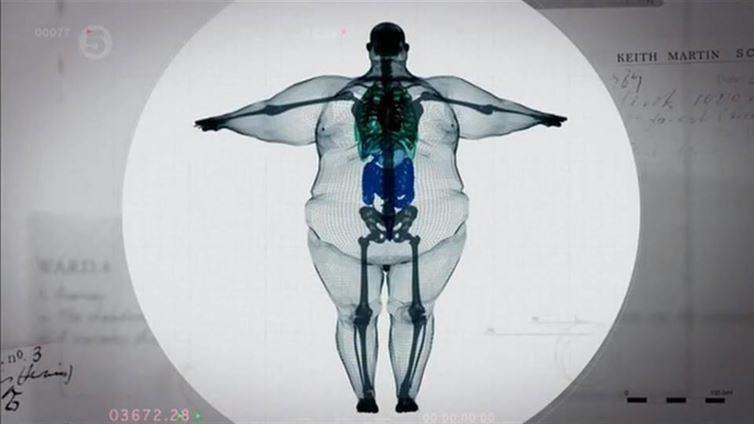 I don't think they should lax the height and weight standards. 22% body fat is higher than the Marine Corps (18%). What I do agree with is changing the taping method. The neck and weight tape test is horrendous and widely inaccurate. I've seen Marines with 6 packs get put on BCP because they didn't have a thick enough neck...

Cpl Clinton Britt
6 y
Dont get me wrong, I agree with you. You do have Small Medium and Large framed people. or petite thin and normal. as long as you dont have a belly flop or love handles, I think that a person should be left alone
(0)
Reply
(0)

SSG Gregg Mourizen
11 mo
I agree. Very inaccurate. I have seen up to 10% differences, between two tapers, using the same standard. You are supposed to be able to challenge the tape, but in 23 years, I never found anyone willing to support that reg.
I never understood why the military doesn't use the calipers. So much more accurate and reliable. So much more Barney friendly. Much easier and straight forward to calculate.
(0)
Reply
(0)
Show More Comments
Read This Next
RallyPoint Home