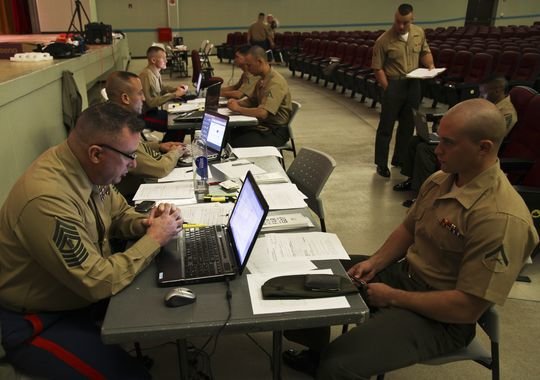 MARINE CORPS BASE QUANTICO, Va. — Long seen as way to get ahead career-wise, special duty assignments are about to become a lot harder to come by for inattentive or unmotivated Marines.

Manpower and Reserve Affairs officials are overhauling the SDA screening process, making it dramatically more targeted to reflect the needs of the Corps. But that means the onus is on noncommissioned officers to apply early if they are interested in one of the three-year assignments.

The more exclusive selection process comes as Commandant Gen. Joseph Dunford makes alleviating the shortage of critical NCOs one of his top priorities. Though the Corps has the numbers, the high operational tempo coupled with other demands mean many units go without experienced leaders.

The commandant recently announced plans to form a task force aimed at gauging the extent of the problem.

"What we're trying to do right now is go out there across the institution, define the right leader-to-led ratio for each element of the [Marine air-ground task force] right down to the right unit, and review our inventory of staff NCOs by grade, [military occupational specialty] and qualification," Dunford told Marine Corps Times last month.

Overhauling the SDA screening and slating process seems one place to start. The old system, which required reviewing thousands of records, often put NCOs and staff NCOs in limbo for months, officials said. About 5 percent of the Corps is on SDA at any given time, with another 4 or 5 percent in the pipeline.

But a more streamlined screening and slating system means thousands of Marines who could once count on getting caught up in the process must be more proactive in pursuing an SDA, which includes recruiters, drill instructors, Marine security guards, combat instructors and Marine Corps security forces guards. Though no guarantee of promotion, a three-year SDA stint is viewed favorably by selection boards and could come in handy as the service continues to shrink in the post-war years.

Manpower officials are taking a much more analytic and selective approach to gathering future batches of prospective SDA candidates.

Where in the past they compiled a list of as many as 14,000 eligible Marines, planners are beginning with around 7,000, said Lt. Col. Rory Quinn, head of Manpower's Enlisted Assignment section. Working with primary MOS monitors, who know the needs of the Corps inside-out, Quinn said, that group is whittled down to about 3,000.

An as-yet undetermined amount of alternates also will be selected. Both lists include tentative SDA destinations for the selected Marines.

The finalized lists go out in April. Parent commands then will evaluate the selections, certifying the chosen Marines meet standards and making recommendations as to where they end up. Since SDA schools run throughout the year, unit leaders also can request when a Marine departs for training.

"[In] the new model they get to say, '… I think he'd make a great DI, and I'd really appreciate you taking him on the first class of the year. I don't need him anymore; he's done his important job,'" Quinn said. "Alternatively, he could say, 'I've got a major inspection coming up in April. If you could put him in the last class of the year … that would be helpful.'"

At that point, a team of screeners will fan out across the Corps. With fewer candidates to meet, interviews will run longer and be more in-depth, Quinn said. Representatives from the SDA billets will attend as well to provide mentoring, if needed.

Sponsors, who can help prepare a Marine for an upcoming SDA, also can be made available, he added.

Orders go out in June, about four months before the first classes start. Other Marines may have to wait as long as 16 months to begin their training, Quinn said.

For Marine manpower planners, grappling with the pressures of a major drawdown and tasked with correcting the imbalance in NCOs and staff NCOs, reforming the SDA screening system could prove a major boon.

To start, it immediately cuts in half the amount of Marines placed in limbo during the selection process. Instead of setting aside 14,000 Marines, it's only 7,000, Quinn said. Of those, only the 3,000 — plus a smaller amount of alternates — ultimately will be placed on hold.

That leaves thousands more available for other jobs around the Corps, Quinn said.

"We are freeing up a lot of inventory from this [SDA] hold status," he said. "On any month of the year, if ISIS heats up and if we're deciding we're going to increase efforts over there … the commandant will have available to him a larger percentage of his manpower."

The overhauled system also shortens the time between selection and the start of classes. Quinn believes that will cut down on pre-class attrition, which planners estimate to be about 20 percent per cycle.

Marines fall out for a variety of reasons, he said. Common causes include weight gain, injury and — for those approaching the end of their time with the Corps — the decision to forgo an SDA. Another 10 percent are expected to wash out of SDA school, according to officials.

With less time between selection and the start of training, attrition should drop, Quinn said. He also believes a more intensely scrutinized crop of candidates will lead to a more motivated group, thus reducing losses.

The shortened length of time between selection and training also boosts plans to free up more Marines for other tasks. Under the previous system, SDA candidates could be on hold up to 21 months.

In an era when the Corps is downsizing, special duty assignments come highly-recommended for Marines seeking advancement.

Though not a prerequisite for promotion, selection boards look favorably upon the three-year tours. It shows a Marine can succeed outside of his or her military occupational specialty, Quinn said. An SDA billet is particularly helpful for those Marines with jobs lacking in human leadership opportunities, he said.

"It is a great opportunity to serve," Quinn said. "It's uniformly respected by promotion boards and senior leaders."

But with a smaller pool of candidates being drawn upon each year, it behooves Marines to make their interest known as soon as possible, particularly if they have an assignment preference. Boat space for drill instructors, for example, often runs out quickly.

Timing also matters if money is a factor. Though pay for four of the five SDA billets fell at the start of the fiscal year, it decreased unequally. Marines taking a special duty could see advantages in grabbing one of the better paying billets before they fill.

Quinn's team is accepting volunteer applications — a Reenlistment, Extension, Lateral Move request form is needed — until March 20. While still expected to meet the criteria established for all SDA candidates, Quinn believes volunteers stand a higher chance of making it through, thus earning a good shot at a billet.

"We will pull our initial list based on performance metrics which frequently lead to success: years of service, lack of documented misconduct, proper MOS," Quinn said. "...[But] in my mind, if I can get guys who are desiring to go, they're going to [graduate]."

Cpl Jeff N.
Posted >1 y ago
By the looks of the master guns across from the lance we should be paying more attention to SNCO height and weight standards.
(2)
Comment
(0)