SMA Dailey's Top 10 Leadership Tips For Sergeants Major. Is it Great Advice Or Not? 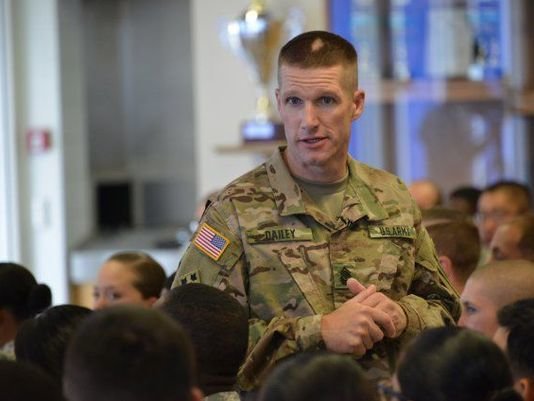 (Check the Checker)-Army Slang-
I am in agreement with Sergeant Major Of The Army Daily's advice to the Sergeants Majors within the Army. This is my favorite bullet,"No. 10. Never forget that you're just a Soldier. That’s all you are. No better than any other, but just one of them. You may get paid a little more, but when the time comes, your job is to treat them all fair, take care of them as if they were your own children, and expect no more from them of that of which you expect from yourself."

In a recent Armytimes article:
Sergeant Major of the Army Daniel A. Dailey doesn’t pull any punches when he’s talking to his fellow senior noncommissioned officers.
Dailey, who has been the Army’s top enlisted soldier since Jan. 30, has 10 leadership tips he often shares with them, particularly those preparing to become sergeants major.
“Despite what you’ve experienced in the past, a sergeant major’s job isn’t just to find uniform deficiencies," Dailey said earlier this year to the newest graduates of the U.S. Army Sergeants Major Academy. "It’s not just to ensure everyone has matching PT belts and make sure everybody stays off the grass.Your job is to lead soldiers, to ensure they’re trained and ready to fight our nation’s wars, and bring them home again, and get them ready for the next adventure. Everything you do … should be focused on that, and we’ll be OK.”
Dailey's top 10, in his own words:
No. 1. Yelling doesn’t make you skinny. PT does.
If you’re not out there saluting the flag every morning at 6:30, you can automatically assume your soldiers are not. Soldiers don’t care if you’re in first place. They just want to see you out there. This is a team sport.
PT might not be the most important thing you do that day, but it is the most important thing you do every day in the United States Army. The bottom line is, wars are won between 6:30 and 9.

No. 2. Think about what you’re going to say before you say it.
I’ve never regretted taking the distinct opportunity to keep my mouth shut.
You’re the sergeant major. People are going to listen to you.
By all means, if you have something important or something informative to add to the discussion, then say it. But don’t just talk so people can hear you. For goodness sake, you’re embarrassing the rest of us. Sit down and listen. Sometimes you might just learn something.
No. 3. If you find yourself having to remind everyone all of the time that you’re the sergeant major and you’re in charge, you’re probably not.
That one’s pretty self-explanatory.
No. 4.You have to work very hard at being more informed and less emotional.
Sergeants major, I’ll put it in simple terms: Nobody likes a dumb loudmouth. They don’t.
Take the time to do the research. Learn how to be brief. Listen to people, and give everyone the time of day. Everyone makes mistakes, even sergeants major, and you will make less of them if you have time to be more informed.

No. 5.If you can’t have fun every day, then you need to go home.
You are the morale officer. You don’t have to be everyone’s friend, but you do have to be positive all the time. The sergeant major is the one everyone looks to when it’s cold, when it’s hot, when it’s raining, or things are just going south. Your job is to keep the unit together. That’s why you’re there. The first place they will look when things go bad is you, and they will watch your reaction.
No. 6. Don’t be the feared leader. It doesn’t work.
If soldiers run the other way when you show up, that’s absolutely not cool.
Most leaders who yell all the time, they’re in fact hiding behind their inability to effectively lead. Soldiers and leaders should be seeking you, looking for your guidance, asking you to be their mentors on their Army career track, not posting jokes about you on the 'Dufflebag blog'. That’s not cool. Funny, but it’s not cool.
No. 7. Don’t do anything — and I mean anything — negative over email.
You have to call them. Go see them in person. Email’s just a tool. It’s not a substitute for leadership. It’s also permanent.
You’ve all heard it. Once you hit ‘send,’ it’s official, and you can never bring it back. Automatically assume that whatever you write on email will be on the cover of the Army Times and all over Facebook by the end of the week. Trust me, I know this personally.
No. 8. It’s OK to be nervous. All of us are.
This happens to be my favorite. It came from my mother. My mom always used to tell me that if you’re not nervous on the first day of school, then you’re either not telling the truth, you either don’t care, or you’re just plain stupid. [Being nervous] makes you try harder. That’s what makes you care more. Once that feeling is gone, once you feel like you have everything figured out, it’s time to go home, because the care stops. Don’t do this alone. You need a battle buddy. You need someone you can call, a mentor you can confide in. Don’t make the same mistakes someone else has made. Those are the dumb mistakes. Don’t do this alone.
No. 9. If your own justification for being an expert in everything you do is your 28 years of military experience, then it’s time to fill out your 4187 [form requesting personnel action] and end your military experience.
Not everything gets better with age, sergeants major. You have to work at it every day. Remember, you are the walking textbook. You are the information portal. Take the time to keep yourself relevant.
No. 10. Never forget that you're just a soldier. That’s all you are. No better than any other, but just one of them. You may get paid a little more, but when the time comes, your job is to treat them all fair, take care of them as if they were your own children, and expect no more from them of that of which you expect from yourself.
http://www.armytimes.com/story/military/careers/army/enlisted/2015/11/23/sma-daileys-top-10-leadership-tips-sergeants-major/76268752/
Posted in these groups:

SFC (Join to see)
Edited >1 y ago
Posted >1 y ago
Outstanding article. Has anyone else noticed that when a article has been done with him and pics attached he is:
1. Not on a stage or behind a podium
2. He's out in the "crowd" mixing and mingling. That in itself says a lot about the man.
(10)
Comment
(0)