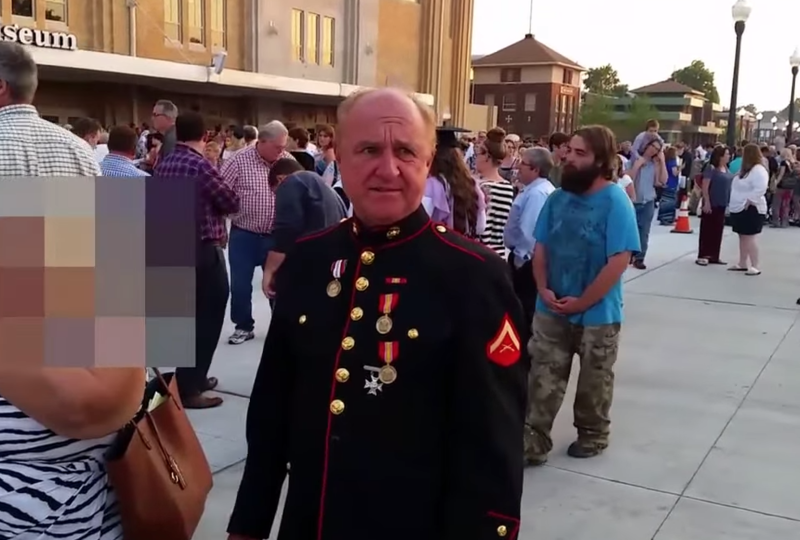 This video was filmed at a NoblesVille Indiana High School graduation.(We covered the girlfriend and her family's faces for privacy) A Marine and his father,...

This video was filmed at a NoblesVille Indiana High School graduation.(We covered the girlfriend and her family's faces for privacy) A Marine and his father, who were attending the Marines brothers graduation noticed the fake when leaving the graduation. They approached and the father started filming. After the confrontation, the fake Marine fled and was nowhere to be found. The girlfriend of the fake and her family had no clue he was a fake, she was recently divorced and this fake was wooing her. She, and her two sons, one whom was also graduating, thanked the Marine and his father for what they did. The now former girlfriend said she thought something wasn't right, but wasn't quite sure.

They exchanged numbers, and the Marine and his father assured them they would make sure this fake didn't fool anyone else. This was a win for all parties, except the fake Marine.

https://www.youtube.com/watch?v=QuDUL8o6oD8
Posted in these groups:

MAJ Robert (Bob) Petrarca
Posted 5 y ago
OMG, If you're going to fake it at least give it an honest try. Dude, at least watch a movie, look at a picture, buy a vowel and get a clue before you try to be a poser.
(155)
Comment
(0)
show previous comments

SPC William Clark
5 y
I am open to that I was just an Army MP E-4 Specialist. Sure I regret not doing more but then I remember I did do my 4 years with honor. And I make a point to thank every vet i see, the way i put it #SeeaVetThankaVet
(0)
Reply
(0)

SGT Xenophon Garcia
>1 y
That "uniform" is an atrocity. A bad eye should spot it. He doesn't even have his rank on straight, much less those medals.
(0)
Reply
(0)

SSG John Erny
Posted 5 y ago
"Stolen Valor" yes, on top of that he looks nuttier than a squirl turd!
(74)
Comment
(0)

SSG John Erny
5 y
Col Clarence Robert Jones - Sir, in retrospect I agree, a special needs person most likely. We have one hear in town who likes to wear BDU's but every one is aware of his condition
(1)
Reply
(0)

SFC James J. Palmer IV aka "JP4"
Posted 5 y ago
You know something? Most times I get hot at stolen valor but not this time. The effort here was so bad it is kind of funny to me. He is too old and how do you have one ribbon and three medals? Bless his little 97 year old heart. GySgt Wayne A. Ekblad. Nexttime, can you help this guy get dressed? Lol.

Sgt Michael Philbin
5 y
This guy is wearing a Bloodstripe, and he is a Lance Corporal? Medals were both National defense and SharpShooters badge was at his waist. This is as blatant a fake as I have seen and not close to passable , he is not worth the effort! His Mos was 0000 hiding in a Crowd!
(1)
Reply
(0)

SPC(P) Mark Newman
2 y
I've never seen stolen valor at a paygrade even lower than mine!