The Vietnam War: Was it Necessary? 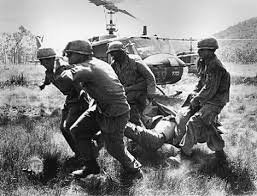 Vietnam was the longest war in American history and the most unpopular American war of the 20th century. It resulted in nearly 60,000 American deaths and in an estimated 2 million Vietnamese deaths. Even today, many Americans still ask whether the American effort in Vietnam was a sin, a blunder, a necessary war, or whether it was a noble cause, or an idealistic, if failed, effort to protect the South Vietnamese from totalitarian government.

Between 1945 and 1954, the Vietnamese waged an anti-colonial war against France, which received $2.6 billion in financial support from the United States. The French defeat at the Dien Bien Phu was followed by a peace conference in Geneva. As a result of the conference, Laos, Cambodia, and Vietnam received their independence, and Vietnam was temporarily divided between an anti-Communist South and a Communist North. In 1956, South Vietnam, with American backing, refused to hold unification elections. By 1958, Communist-led guerrillas, known as the Viet Cong, had begun to battle the South Vietnamese government.

To support the South's government, the United States sent in 2,000 military advisors--a number that grew to 16,300 in 1963. The military condition deteriorated, and by 1963, South Vietnam had lost the fertile Mekong Delta to the Viet Cong. In 1965, President Lyndon Johnson escalated the war, commencing air strikes on North Vietnam and committing ground forces--which numbered 536,000 in 1968. The 1968 Tet Offensive by the North Vietnamese turned many Americans against the war.

From 1968 to 1973, efforts were made to end the conflict through diplomacy. In January 1973, an agreement was reached; U.S. forces were withdrawn from Vietnam, and U.S. prisoners of war were released. In April 1975, South Vietnam surrendered to the North, and Vietnam was reunited.

1. The Vietnam War cost the United States 58,000 lives and 350,000 casualties. It also resulted in between one and two million Vietnamese deaths.

SGM (Join to see)
Edited 6 y ago
Posted 6 y ago
PV2 Daniel Shipley
I think SGT Jim Z. makes a fair statement on whether any "war" is necessary.

What is necessary is supporting your allies and really that's what the Vietnam war (I call it war because fricking war is war regardless if it's declared) boiled down to, the United States supporting our French allies.

The military will follow the orders it receives from it's civilian bosses. We really have no say in that we just follow orders. Unfortunately war is human nature, we are just about the only animals that kill each other for no clear purpose.
(14)
Comment
(0)

SGT Jim Z.
6 y
SGM (Join to see) I agree with you on supporting our allies and trust me by the true definition of war it was a war.
(6)
Reply
(0)

SSG Bill McCoy
1 mo
I agree with you comments and would add that, during WW2, the U.S. assured the Vietnamese (Ho Chi Minh) that if they helped against the Japanese, then we would pressure the French to give Vietnam its independence. When that didn't happen, the Viet Minh (as they were known in the 50's) went to war against the French. We entered the war AFTER the French lost in '54, but not until years after. Then, we were trying to stop the Communist "Domino Effect," that never transpired, in support of SVN.
I believe it was in the book, "Tunnels of Cu Chi," that General Giap (NVA) stated that, in 1969, had we not stopped the bombing campaign, the North was on the verge of capitulating and withdrawing from SVN.
(0)
Reply
(0)

LTC Raymond Buenteo
1 mo
Vietnam was a war that prioritize public opinion and political relationships over the true nature of war, kill and destroy your enemy until they want the war to end.
(0)
Reply
(0)

SSG (Join to see)
Posted 6 y ago
Actually, Viet Nam was not a 'War' in the same sense as WWI and WWII. It was a conflict as Congress never declared war on North Viet Nam. And President Truman never sought a formal declaration of war against North Korea. So contrary to popular belief, the 1950 to 1953 conflict here on the Korean peninsula was classified a 'Police Action'.

But to answer your question. Who knows for sure? In my opinion, looking back at Afghanistan and Iraq we could ask the same question and it appears that if there were any lessons to be learned from Viet Nam we damned sure failed in that department.

Now don't think for one damned second I'm trivializing the sacrifices my brothers and sisters in arms have paid over the past 13 years. My beef is with those 'arm chair' Generals and politicians wearing the Generals stars that sit up on that damned hill in Washington, DC and saddle us with so many ROE's that we have to ask permission to piss. Plus, when you have an enemy that fights when 'they' want to, blends in and uses the local populace and doesn't think twice about sacrificing innocent civilians for their cause as the insurgents, Viet Cong and North Vietnamese Army done it's impossible to 'win' even with our technology.

So was Viet Nam worth it? Again, who knows?
(14)
Comment
(0)
show previous comments

SGT Robert Pryor
2 mo
PO3 Bob McCord - Sometimes I look at these old threads. What you wrote is very profound. A big part of my mission was to expand the sphere of influence of the central government. I didn't care much about that then, and I still don't care. What I cared about back then, and still care bout today, is the people. Well, that and coming home alive.
(1)
Reply
(0)

1SG Fred "SARGE" Bucci
2 mo
SGT Robert Pryor - Welcome back my friend and brother. I was so pissed about what happen to you. We are all glad that you are back among the living. Have a safe and Happy Thanksgiving.
(0)
Reply
(0)

LTC Raymond Buenteo
1 mo
North Vietnam was a socialist communist country. Every citizen was mobilized to fight in one way or another. The American government underestimated this mobilization and under utilized our full military capabilities. Politicians and politics took priority over service members lives and winning a war. War is a desperate political maneuver which is effective if you fight to dominate, destroy and kill the enemy and their capabilities to wage war in return. This was not the objective.
(1)
Reply
(0)

LTC Raymond Buenteo
1 mo
Johnson and MacNamara used political maneuvering to fight against the North Vietnamese. They lied to America. They legitimized our military presence in south Vietnam by sighting the domino theory. Yet they refused to militarily dominate north Vietnam into capitulation for fear of intervention by China and Russia. They did not have a clue on how and why to fight a war.
(0)
Reply
(0)

CPO Emmett (Bud) Carpenter
Posted 6 y ago
You DAMN right it was worth fighting! If we had not fought the Vietnam War all of southeast Asia would belong to the Communist. I would do again in a heartbeat. I lost alot of good shipmates to the Vietnam War and part of my soul is still there. If we did it again I pray we would do the right way.
(11)
Comment
(0)

PO3 Bob McCord
4 y
Right on Chief. We were there and saw it first hand. But ask any of the others that were there also and you,ll get a multitude of answers. I lost two teenage buddies there and I don,t think their families would think it was necessary or worth it. I also was in a boat crew that rescued some Vietnamese villagers from the only homes they had ever known just before their village was burnt to the ground by Charlie. The looks on their faces, the tears, and the crying babies made it worthwhile to me. I think after all of that, we only calmed things down because the communists, although in the background still run things clandestinely, and life goes on somewhat normally for them. They still have a hard time finding a good job unless they or someone in their family was on the side of the north though. I spent so much time over there that I really got to know the people and all they wanted was to be left alone. Just like we would. But they needed our help. There,s a line in Chis Kyles book [American sniper] When he says, "when I was there, I wanted to be home, and when I was home I wanted to be there". By the way Chief. Welcome home my Navy brother.
(6)
Reply
(0)

SFC Chuck Martinez
1 mo
I was an airborne Infantry man in the Vietnam war and I personally witnessed all the killing and wounding of our young men and civilians. Opinions are like assholes, we all got one but if you were not boots on the ground in the battle fields you have no freaking idea what happen out there. Triple canopy jungles, raining day and night with the only cover we had was our ponchos. Our soldiers dying every God Dam day and trying to get the wounded out was not an easy Task. If you was not an infantryman, you have no idea what the hell you are talking about and that angers the hell out of me. We lost with those never recovered (MIA) over 60,000 American lives there and for what?? We did not accomplish a God dam thing. Sure we won mostly all of the battles but at a big prize to pay in lives.

61% of those who served were under 21 years of age, 11,465 teenagers were KIA. 75,000 were severely wounded, 23,214 were 100% disabled, 5,283 lost limbs with booby traps and in battle, 1,081 sustained multiple amputation. God dam it. how many of you were actually out there in no man's land when the shit hit the fan??? How many of you held in your arms a dying young buddy with that look of fear in their eyes, knowing that they were close to death. How about all those innocent children and civilians who were caught in the middle and killed. We were not just fighting one enemy, we were fighting many and all were not the NVA nor the VC. We had 24,606 who got the malaria in those mosquitoes infested jungle, and I was of of them. About 50 died of malaria, 10,786 died of supposedly none hostile reasons, 9,107 of accidental deaths, 236 were homicides, and 938 died of illnesses. There is no way in hell I believe that stupid war was worth fighting for and anyone who does has to be out of their minds. That freaking war was NOT worth fighting for because all we did was cause a lot of deaths on both sides and did accomplish a dam this.

According to a report by the Dept. of Veterans Affairs, the current analysis, indicates that an average of 20 Vietnam Veterans die from suicided daily. They are still suffering from what happened out there. I have PTSD and it pisses me off when many who were in Vietnam and were not in combat say they would do it again. To all our combat ground forces who were in the Nam, I pray for all of you every day! Amen!
(0)
Reply
(0)
Show More Comments
Read This Next
RallyPoint Home