This should be interesting. What are everyone's thoughts and opinions on U.S. Army WTF Moments page and posts?

SFC (Join to see)
Posted 6 mo ago
Absolutely essential. US Army WTF moments is basically just a branch of the IG that doesn't have to worry about politics or hurt feelings. And unlike IG, people actually listen to and care about what US Army WTF moments has to say.
(5)
Comment
(0)

MAJ (Join to see)
Posted 6 mo ago
I think it provides a needed alternative to the standard channels for getting things done. If it wasn't necessarily, it wouldn't be effective - but it is.
(4)
Comment
(0)
show previous comments 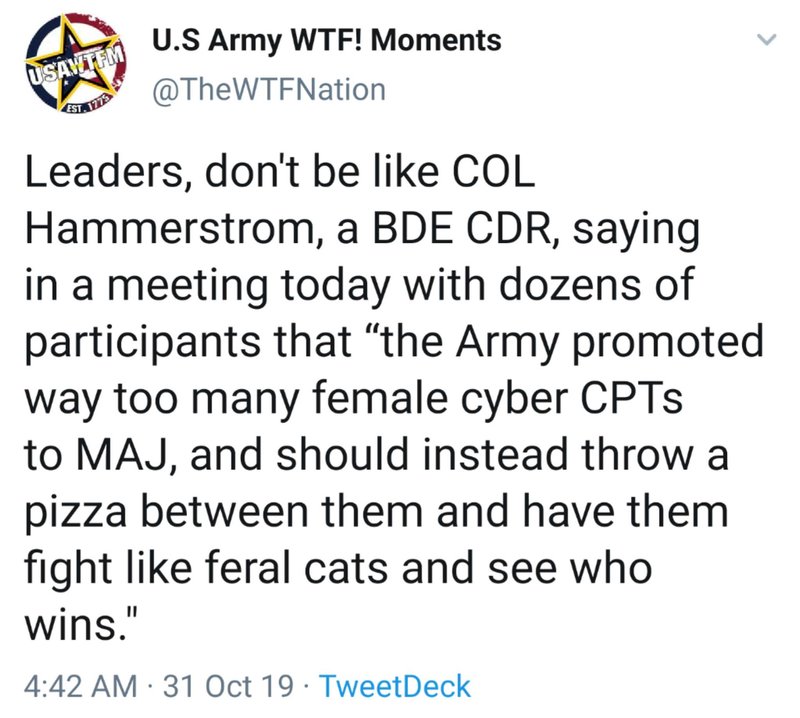 LTC Jason Mackay Like this guy, there's no real recourse in the Army system for this kind of bad leadership. This is where USAWTF comes into play.
(0)
Reply
(0)

LTC Jason Mackay
5 mo
MAJ (Join to see) - This is a specific example of shit-show stuff that I object to. At face value, this BDE CDR is way out of bounds here. This is exactly what a formal EO complaint is for. If you dont use the system, it wont ever work for you. You file the EO complaint at the next higher organization, Sworn statements taken and an investigation conducted. The GCMCA decides how to deal with it based on the findings. I disagree there is no recourse. Commanders now are getting relieved at staggering rates. In my day, the mere appearance of an EO complaint was a career death sentence. Not even getting into whether or not it was true.

The automatic assumption is that it is proven he said this, exactly how it appears on USAWTFM. So where is that actionable sworn statement? Lets say it is 1000% true and the GCMCA has him executed behind the motorpool at dawn, still dont need the general public wading through this with their uninformed and capricious Facebook-deep moral outrage.

<Lovingly admiring my DD214> This will be your generation's leadership challenge to solve.
(0)
Reply
(0)

MAJ (Join to see)
5 mo
LTC Jason Mackay - And I think this is what USAWTF is exactly for. A formal EO complaint would result in... what? The BDE CDR gets told, "Hey, be smarter about what you say next time." And then NEXT time he says something like, "Well, I had a joke about too many promotion, but because of 'PC culture' I can't tell it anymore. It's a new Army!" And then everyone still gets the gist and he still gets to be a toxic leader. An EO complaint isn't going to slow him down, change his attitude, or make him a non-toxic leader. It's just a placebo at this point.

The reality is that social sanctioning IS the next-generation of getting things done. That's what this is. The Army wants to maintain recruiting levels? It's going to have to crack down on leaders who make it look bad.
(0)
Reply
(0)

LTC Jason Mackay - And this is another instance that validates the necessity of sites like USAWTFM. The Soldiers in this unit, without an outside resource like USAWTFM, would have no recourse except to first install this app, have that installation verified by their Commanders, and THEN go up the Chain of Command to voice their concern. By then, the damage is done. There is no "undoing" it.

It is exactly because of USAWTFM that thousands of Soldiers data and privacy hasn't been shipped off to a third-party source in another country. Until the military has a system in place for immediate action, USAWTFM is a necessary evil.
(0)
Reply
(0)

MSG Danny Mathers
Posted 6 mo ago
Good question; i don't like them because the humor is lost to a civilian in that it present a poor image of my blessed Army. We all make mistakes which in the military is a lesson learned, not to repeat. Some of the WTF stuff is embarrassing and some has the "what just happened" factor. I would like the captions explained if anything. Some of the moment can't be avoided such as a tank or Humvee getting stuck in muck. I know my time in mechanized infantry, we had all kinds of moments both in a Vietnam, Germany and Fort Polk. Opinions vary......
(3)
Comment
(0)
Show More Comments
Read This Next
RallyPoint Home