To those that don't care about Stolen Valor, what makes you not care? 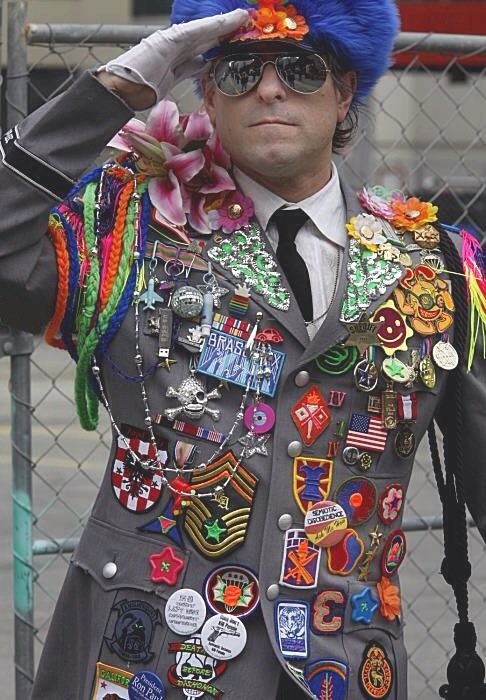 Some people just shake their head when they see the news headlines, scroll past it, or lose their mind and share with the world. I would like to think deep down we all really do care about exposing phonies especially when they are wrongfully receiving benefits that the deserving need. There is a chain reaction that could be talked about forever on how the phonies hinder the process for veterans.
Posted in these groups:

LTC (Join to see)
Edited >1 y ago
Posted >1 y ago
I'm becoming more and more uncomfortable with this culture of SMs or Vets walking up to people and demanding proof of service. Lately there were two threads about 75 year old vets getting publicly humiliated by other vets. In one case the vet ( or maybe it was a soldier) wouldn't even believe the vets VA card, claiming anyone could print one out.

So that got me thinking how I would respond if someone saw me wearing either military related awards or badges on Veterans Day or say military badge related hats or Tshirts, and came up and started asking me questions. The truth is, in this day of identity theft and scams, I would probably politely tell that guy to f--k off. I sure as hell would never feel like I owe it to any stranger that walks up to me to produce my military ID card and DD214. Really, who the f--k do these people think they are?

This is the United States. I don't have to respond to "your papers please" from anybody, much less some soldier with a hair up his ass.

And as pissed as that would make me, I can't imagine how my dad would have responded when he was 75 if some twenty something "kid" walked up to him and basically demanded that he, a WWII and Korean War vet, prove to this stranger he is authorized to wear his CIB with star. Even at age 75, he would probably try and fight the guy.

So this whole blood sport of confronting and videoing and humiliating people just because they may be wearing a badge wrong has got to stop. It's unprofessional and unAmerican. As I said, I don't have to tell you where I went to basic, what Ranger School Class I was in, or anything else. It's none of your f--king business. You're a damn total stranger to me. Hell, I have no way of knowing if you are even a soldier yourself. So get out of my face and keep your vigilante bullshit away from me or my dad, or others like us. I'd rather a thousand clowns walk down the street in costume than one vet be humiliated by someone who probably hasn't served a fraction of the time the vet did.

There are laws about actually stealing goods or services by impersonating vets. Leave that to the stores. If they give military discounts to people without requiring appropriate ID cards or documentation, that's their mistake. IMO vets should stay in their lane and stop confronting people.
(2.1K)
Comment
(0)
show previous comments

PO2 Darrell Weyman
8 d
A lot of these same "vet" kids who bitch about hang nails for disability.
(3)
Reply
(0)

CPT Gurinder (Gene) Rana
7 d
We, who served and are serving our Country honorably, do not need to prove our service or our achievements to anybody; we served or are serving and we earned and are earning. The rest is insignificant.
(2)
Reply
(0)

SFC James Liedtka
5 d
Why don't they harass me? I have a lot of anger I would like to pass on to them. But then I had a SFC question me in 2001 before the war started about my 7th EN BDE combat patch and why I was wearing it. I'm guessing he was jealous of the 2 of us (SSGs) that earned them. Me in DS and the other in Mogadishu.
(2)
Reply
(0)

SP6 Ivan Beaulieu
2 d
As soldiers we dedicated ourselves to protect those who cannot defend themselves, and serve the less fortunate. We are essentially Servant Leaders, no Bullies. Individuals who portray themselves as something they are not, have some thing wrong with themselves, maybe they lack self esteem, or have some deep psychological issues, need attention and/or are calling out for help. WE ARE NOT PREDATORS I see no benefit in punishing or humiliating these individuals in public.
(1)
Reply
(0)

SN Greg Wright
Posted >1 y ago
SFC (Join to see) It's not that I don't care, SFC. It's that I'd rather let 10 fake fuckers wear their fake rewards, than to (wrongly) accost one single vet that was legit.
(1.3K)
Comment
(0)
show previous comments

Sgt Wayne Horton
1 mo
I would hope to have evidence...before confrontation.
(4)
Reply
(0)

SP5 Tom Haines
13 d
I had three Marines, many years ago, approach me while I had on my Army Dress Greens. (I had been in the Vietnam War.) They first accused me of stolen valor. I asked them to ask me about anything military they wanted to ask. They peppered me with question after question. I gave them correct answer after correct answer. Finally they stumped me on one. I said, "Hmmmmm, well, I guess you got me on that one. What is the answer?" I was then greeted with silence followed by 'Have a nice day, Sir.'" "I said as I departed, please don't call me sir, these are stripes, not bars." I turned around and said, "Are you sure you're Marines?", smiled and left.
(5)
Reply
(0)

LTC (Join to see)
Edited >1 y ago
Posted >1 y ago
I care, but I care more about the Constitution than my own feelings. We can't say "we're a free country, but you can't say or wear those things because it offends me." I'm just not a fan making laws that ban citizens from wearing certain symbols when there are groups of people offended by those symbols. It sounds contrary to everything we serve for.

Now if people want to expose phonies, I'm all for it. Let them be judged by the public.

When it comes to fraud, there are plenty of existing fraud laws to cover those cases. Those who commit fraud should be prosecuted under fraud laws.
(623)
Comment
(0)
show previous comments

1SG Allen Upton
7 d
I have never been asked if I was a Veteran, guess the way I conduct my business makes it apparent. Speaking with as many people that I do, I can tell a fake all day long. Ask them their MOS and where they were stationed for starters and you can easily tell if they are being true. To those who decide to wear false uniforms to gain attention only tells that they were too coward to serve or not able to reach the standards required to enter the Military. I think most have mental issues such as dementia, not knowing who they truly are. The benefits that I have from the experiences which I served under are priceless and are a reason for the values which I hold. I will never allow anyone to disrupt who I am and what I have done for this great nation. If anyone ever approaches me and asks for my Military ID then upon showing it, I will in turn ask for theirs. God Bless all you that did your duties and served, and God Dam those that feel putting on a false uniform makes them proud.
(2)
Reply
(0)

CPT Gurinder (Gene) Rana
7 d
MAJ (Join to see), our duty is to notice and correct. However, how do we correct a Halloween costume in public?

A guy was wearing a green field jacket with an Airborne patch and ranks. The Airborne patch was on the wrong shoulder and the ranks were incorrectly worn. After I pointed the errors to the guy, who showed me the finger, claimed that he was a Nam Vet and that's how his outfit wore their field jackets.

You are smarter than me Sir and you understand that this guy was a fake veteran. However, in public, such characters can be extremely devastating. Best is to stick to the Constitution.
(1)
Reply
(0)