What advice do you have for service-members and fellow veterans who are struggling with alcoholism or who are new to sobriety? 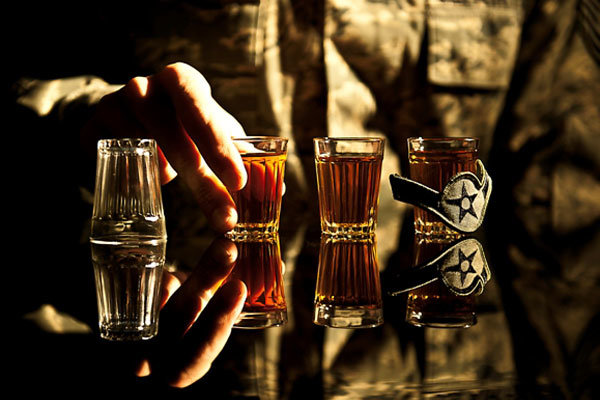 Alcoholism - and alcohol in general, is a topic that, though we bring up as leaders, is shied away from. We hear it from out subordinates (and even our leaders) all the time. "Im going to get so drunk this weekend!" or "I can't wait to go home and get smashed!" We talk about responsible drinking all the time, but many of us do this because it's what "we're supposed to SAY". What are you DOING about it? For some of us, alcoholism is an issue that hits a lot closer to home. Perhaps it's a battle you have to live with. What advice do you have to active duty service member or your fellow veterans who are struggling with alcohol or who are new to sobriety?
Posted in these groups:

Know that there are good people out there who care about you and want to help if possible. As I said in your other thread, many people drink or do drugs to escape their pain in their lives. Whatever that may be.

Keep looking forward and don't turn around. If you turn around, you will be tempted to see what is back there.

COL Mikel J. Burroughs
Posted 3 y ago
PO1 (Join to see) There has to be a desire on your part to stop or get the help - it isn't easy and there consequences to drinking!
(6)
Comment
(0)

LTC Stephen F.
Edited 3 y ago
Posted 3 y ago
When I enlisted in 1974 drinking was encouraged and that continued into the 1980s with dining ins and dining outs and other events where dinking was the order of the day PO1 (Join to see). In those days smoking cigarettes was also encouraged.
It was hard to quit drinking especially when it was encouraged. I had recognized I was alcoholic long ago.
In my own case, drinking and smoking where activities which went together. I tried to quit smoking a few times; but, finally quit in 1987. The issues fro me were being around friends who smoke and drank. When we had gotten together I fell into my old habits.
After I quit smoking, I finally was able to get with old friend s who smoked and drank without smoking.
That was my first step.
I stopped drinking completely about 1991. I has stopped drinking hard liquor before that.
I had recognized my need for salvation through the Christ in 1987. God helped to purge me of desires I could not eliminate by myself.
Thanks for mentioning me Capt Marty Hogan
FYI COL Mikel J. Burroughs LTC Stephen C. Capt Seid Waddell Capt Tom Brown SFC William Farrell SSgt Robert Marx SPC Margaret Higgins MSgt (Join to see) AN Christopher Crayne LTC Bill Koski SPC Tom DeSmet SGT Charles H. Hawes LTC Wayne Brandon SGT (Join to see) SGT Michael Thorin SGT David A. 'Cowboy' Groth
(5)
Comment
(0)
show previous comments

SGT Gregory Lawritson
3 y
Great testimonial Colonel ! Thanks for sharing . I believe I was one of the lucky ones who had terrible hangovers from just a six-pack of Bud. I limited myself to 3 beers over as many hours, yet as I aged, even those produced HUGE headaches. The ‘point of diminishing returns’ came very soon if drinking socially, so now, I limit myself to 1 shot of Patron on Holidays ... that’s it ! I also believe God instilled in me a NON-addictive personality which I thank him for each day as well as praying he helps those addicted to find their way out of that destructive lifestyle.
Thx again !
(3)
Reply
(0)

SGT Charles H. Hawes
3 y
I can tell you that alcohol and drinking just to get drunk or power drinking as we called it back then led to no good for this guy. Fighting bouncers for fun and sometimes each other, because that was being men. Thank God for finding the right woman and wanting more out of life.
(2)
Reply
(0)