What do you think of Open Carry Texas and other gun groups trying to carry firearm in public places? 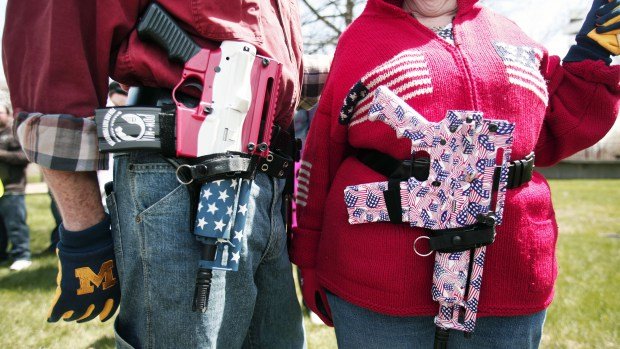 Honestly, I have never had a strong view on carrying firearms in public concealed or not. I own several firearms but don't feel the need to walk around armed even though I do have my conceal license and have been to several shooting course. Weapons are part of my job and I enjoy shooting them, I don't really consider them as a means of home security. But when I see groups like the Open Carry Texas trying to goto restaurants with not only pistols but assault rifles and shotguns a few things go through my mind. First, I see people that are looking for attention which they clearly get, as they act childish and smug when confronted. As soon as someone disagrees with them they throw out the 2nd amendment which was for self protection because our country was at war when it was written so common sense should be applied that carrying weapons is asking for trouble. When I say trouble I am talking about negligent discharges, confrontation, lack of training, and knowledge of weapons. What's the purpose other than causing a scene and getting attention. I love weapons and we should be able to own them but carrying them around in public. I mean there are plenty of countries where it is social acceptable to carry firearms in public, here are just a few: Nigeria, Algeria, Cote d’Ivoire, Zimbabwe, Sudan, Yemen, Sri Lanka, Gaza, Palestinian Territories, Pakistan, Democratic Republic of Congo, Iraq, Afghanistan, and Somalia just to name a few. What do all these places have in common they are really dangerous places, have little to no government, homicide rate is high, economy is terrible. Before we start preaching that we should be able to carry weapons in public areas think about how many safety accidents we have in the military where we train constantly proper weapons safety on a daily basis.
Posted in these groups:

COL Vincent Stoneking
Posted 7 y ago
Three things.
Thing the first, I fully support the second amendment right to keep and bear arms. It is not the right to do so only if not seen. That would be like "the right to free speech, but only in nobody hears you." I fully support open carry. It SHOULD be socially acceptable.

Thing the second, I fully support private property. Not only does this mean you can OWN whatever property you desire, it also means that the owners of that property are free to allow or disallow whatever behavior they chose (within adjudicated limits). This means I fully support the right of property owners to ban guns on their property/business. Similarly, I support your right to free speech, but I will happily curtail it in my living room and invite you to leave if you go past the bounds of decency.

Thing the third, "because I can" doesn't mean "I should." I support the general effort of open carry activists. Exercising your constitutional rights shouldn't be something you have to do in secret. Since there is a phobia (and we could argue reasons until the cows come home) among a large percentage of the population, it makes sense to try to show that you can carry a gun openly, without being a weirdo. It drives a needed conversation. However, there is a line between "making a point" and "being a d*&k." Unfortunately a small percentage of activists fall - or jump - into this category and make the rest look bad, creating opposition where there need not be any. Pun only slightly intended, they are guilty of self-inflicted GSWs to the movement.

Prime example: Starbucks had a very sane policy - "We support our customers following the law. We have no policy for or against open carry." [paraphased] They maintained this in the face of anti-gun group lobbying efforts. A HUGE win. It was pissed away by "National Starbucks Day" [or whatever it was called] morons gloating and insisting on taunting SBUX customers. Now starbucks has a "please don't" policy. (Note: They have not BANNED guns, just requested so far. Remarkable restraint). Same thing with Chipotle and the current spat.

If the open carry advocates hadn't had such a big chip on their shoulders....
(24)
Comment
(0)
show previous comments

SSG Ernie Reiss
3 y
As a retired law enforcement officer, I carry concealed 99% of the time I leave home. Nobody knows I am carrying and the only way they will find out is if I have to use it.

I would never open carry because I feel that I would be a target for the bad guy(s) if an incident were to happen. They do not need to know I am armed until it is too late for them
(8)
Reply
(0)

SGT Steve McFarland
>1 y
SSG Ernie Reiss Even if I could open-carry, I wouldn't, because, like you, I want that element of surprise.
(3)
Reply
(0)

PO1 Milton Wiseman
>1 y
I agree. I am also a CWP holder and in South Carolina we don't have open carry. I do carry concealed, out of sight with no tale tail sign I am armed. I too like to have the element of surprise, but I support open carry laws. Attention is not what I want and other than going into the field to hunt with my rifle slung over my shoulder, you would not know I am otherwise armed and I like it that way.
(1)
Reply
(0)

MAJ (Join to see)
Edited 7 y ago
Posted 7 y ago
You hit the nail on the head - these people are LOOKING for attention, and then complain when they get the type of attention that they know they're going to get. Seriously, I have multiple guns in my home and am a big supporter of the right to own and concealed carry. But do you think I want to take my kid up for ice cream and have jackasses walking around with AR-15s strapped to their backs? These are idiots with nothing better to do who are looking for someone to challenge them so that they can throw their opinions into other people's faces.
(23)
Comment
(0)
show previous comments

SFC Michael D.
>1 y
Has anyone ever done a study on military bases? The state issues you a carry license. The military taught you how to shoot a weapon. But, you can't carry a weapon on post/base. Some post/bases are big enough to be a city. Is there less gun violence on base because of less guns or it it because the military are more disciplined? We all carried our weapons while deployed. In fact most of us slept with ours. So why can't we carry on post/base? I wonder if anyone has done a case study on the subject.
(1)
Reply
(0)

SSG Michael Noll
>1 y
SFC Michael D. - Only reason I dislike going on base for appointments. Do not like having to drive so far without some protection with me. Also someone mention not need to carry. To this I say if you pay insurance why? Better to have and not need then to need and not have. I call that forfit in a gun fight.
(1)
Reply
(0)

SPC Christopher Smith
Posted 7 y ago
I am all for open carry, and concealed carry. My reason is personal and societal protection. In places where everyone is armed, or is assumed to be armed it seems like crime (violent crime) is a little lower. Not too many people are going to try and rape or mug someone who might have a weapon. I don't have evidence of this, but that is my personal feeling.
(21)
Comment
(0)

CW4 John Beebe, BS, DML
7 y
Chicago and Washington, D.C.---> Outlawed guns and crime more than tripled. There are many more examples but your assertion is completely correct.
(9)
Reply
(0)

SGT Steve McFarland
>1 y
I much prefer concealed to open carry, because I prefer to have the element of surprise.
(0)
Reply
(0)
Show More Comments
Read This Next
RallyPoint Home