What does Ferguson mean for police?

Every cop in America knows that, in return for choosing a career in law enforcement, the rules of the road are now that, at any minute, it all could be over and you could become hated and condemned all across the country. No one would have your back, even our current president would denounce you. Because you defended yourself.

In a twist on biting the hand that feeds you, we are instead tying the hand that defends us. We are sending them out, and waiting for the first chance to gut them. It is an incomprehensible act of ingratitude.

All across American law enforcement, officers know that the new reality facing them when they pull their gun is: By defending myself, I could be condemning myself.

Take Darren Wilson. A good cop on routine patrol. He’s coming back from a call and has brief contact with two individuals. Nothing comes of it until he moves a ways down the block and gets a radio description of a wanted individual matching one of the young men he’s just seen.

Rolling back up on the two individuals, the larger of them – Michael Brown – lunges into the driver’s window of the squad car and begins assaulting Darren Wilson. Michael Brown then tries to take away the officer’s gun. The officer gets off a round, Michael Brown attempts to flee, and then charges at the officer, twice, before being shot to death. In the mind of witnesses and Darren Wilson, Michael Brown was set to attack and was an immediate threat to the life of Officer Wilson. So Officer Wilson did what his training taught him to do. He did what instinct, morality and the laws of men command him to do – he defended himself.

And his life is ruined. His career is over, his family is threatened, his name is destroyed, he has been vilified across the country and by the nation’s most prominent (?) voices. (I don’t class Al Sharpton or Jesse Jackson as prominent.) People have rioted demanding imprisonment for him, and there have been countless threats on his life. His life, as he knew it, is over. Because he was a cop and he defended himself.

An entire society has forgotten that Darren Wilson is not the perpetrator of a crime, he is the victim of a crime. Likewise, it has been forgotten that Darren Wilson was an officer of the law with a duty to act, and that he was on patrol that day in the name and service of the people. And it is dispiriting to see how instantly the people have turned on him and his profession.

You get up in the morning and put on a uniform that carries with it the obligation to potentially die in the service of your community, to put yourself between the good people and whatever species of hell pops up, and then, when you are literally fighting for your life and the community’s protection, nobody has your back. Most everybody curses your name. Millions hate you. Much of the nation turns against you.

In the matter of some 20 seconds. Damned if you do… Dead if you don’t…

Every cop in America wakes up every day knowing that that could be his fate. By the happenstance of random probability, the unpredictability of criminality, some wild hare seizing upon who knows what thug, and that could be you. And it wouldn’t matter who you were, or what good you had done, or how many years you had served, or what you had made of your life and to what good cause you had dedicated it. Al Sharpton would be yelling your name, mobs would be burning your effigy, and President Barack Hussein Obama would be undercutting your profession. And who wants that?

What kind of person, having seen on the nation’s newscasts the destruction of Darren Wilson, wants to risk that? How many law enforcement officers will think of the danger associated with their thankless job, see the risk facing themselves and their family, recognize that it is completely unfair and wrong, and quit? How many will lay down their badge and their career and walk away? Probably none. Because that’s the kind of people most of them are. They press on. They do their duty. They don’t quit. That’s who they are.

Not that he wasn’t prosecuted, but that he was ever suspected. That an officer of the law, the victim of a violent and felonious attack, can be forced into a fight for his life, and then be condemned for winning. Would society have preferred he die? We all know that if the cop had died, instead of the guy who attacked him, that none of us would have ever heard of this. The president wouldn’t have commented, the nation wouldn’t have noticed, nobody would have given a damn. Dead cop, no problem. Dead thug, raise holy hell.

And every cop knows that. And carries that sad realization 24 hours a day. President Barack Hussein Obama said we need to train our police better. Maybe we need to train our society better. Maybe we should train the Michael Browns of the world to respect the law, and maybe we should train the rest of us to respect the law enforcers. And have their backs. Or at least understand the horrible risk and reality Ferguson creates for them. Because every cop knows today could be his day.

CW5 (Join to see)
Edited >1 y ago
Posted >1 y ago
There are two sides to every story, SFC (Join to see), and this article tells the "other side." I hear Michael Brown described as an "unarmed teen of color" (over and over on TV), and that kind of leaves part of the story out. What happened at the police car when the altercation happened may never actually be known, but we did see a side of Michael Brown in the convenience store just minutes before that, that may be an "inconvenient truth."

With that said, we now need to heal as a nation, as MAJ (Join to see) said in a recent discussion thread. So, both "sides" need to give a little, compromise, and probably change their behavior.

How do we heal after the Ferguson grand jury decision? | RallyPoint

Whether you feel that the grand jury's decision to not prosecute the police officer was correct or not how do you think that that community and us as a nation can move forward and heal?

SFC (Join to see)
>1 y
CW5 (Join to see) This Post is simply the "other side" you are referring to. The side of ALL LEO's "Law Enforcement Officers" across this nation. I understand that there is a thread on this topic already and in point of fact I believe there are more than one. This is not about Ferguson and Racism and Michael Brown, this is simply helping ALL of us here on RP understand what cops go through and will have to be cognizant of because of incidents like these.

I am still actively involved in the other Healing after Ferguson thread Chief, just offering this as a separate one for the cop view. :)
(0)
Reply
(0) 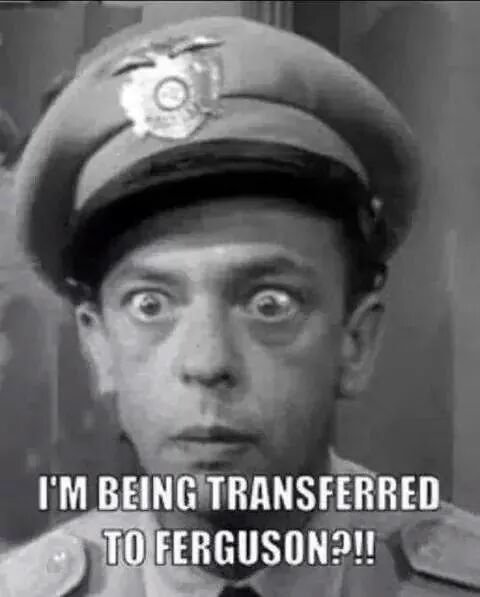 SSG John Stinson
Posted 3 y ago
Sheriff David A. Clarke Jr. has said it best Obama Screwed the pooch on it by jumping the gun to get a sound bite. Ferguson, MO has a Population of about 20,000 people. The majority of the Rioters were from other areas that came in and destroyed the city. Had Obama called for peace, We all know he does not know the meaning of the word only appeasement, and the investigation allowed to happen the findings would have been published faster, instead of being delayed by riots.......and they would have been this....Adult African American Male, Micheal Brown, after committing robbery was encountered by Police while walking in the middle of the street. Micheal Brown fearing that he was about to be arrested attacked Officer Darren WIlson and tried to take his Firearm. Officer Wilson was able to draw his firearm and fire it hitting Brown Several times. Browns accomplices told local news media a BS story but were believe anyways.
(1)
Comment
(0)
Read This Next
RallyPoint Home