What is your favorite military-themed fictional book that you have read? 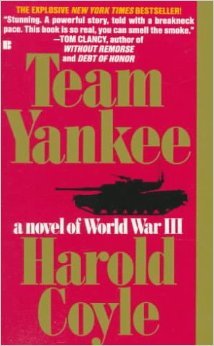 For me, this is a tough choice, as I consider several military-themed works of fiction as my favorite. I would have to say the one that inspired me to rejoin the military (especially the Army) was "Team Yankee" by Harold Coyle.<br><br>http://en.wikipedia.org/wiki/Team_Yankee<br><br>Anyway, I was in line at a now-defunct department store chain where I saw this red hardbound book with an M-1 Abrams on the cover in the check out line. Without any hesitation, I picked it up and purchased the book. The days after that and leading up to and after my medical procedure, I could not put the book down. I was enthralled by the technology of the M-1 Abrams, which was described in almost Clancy-like detail, and the leadership and team dynamics of the unit in the books title.<br><br>I was seriously considering being a Tanker- a 19K - M1 Abrams Crewmember. However, my recruiter who was a 63T- Bradley Mechanic, told me I can "do better" (those were his words, not mine- don't down vote me, LOL!). I did ignore him for a bit at the MEPS station (I did receive my medical waiver), but the only Armor MOS that was open was 19E- M60 Armor Crewmember. In the end, I chose 35R - Avionic Radar Repairer as my Army MOS. <br><br>Even though I was never a Tanker, I was inspired by that book to join the Army in order to "Be All I Can Be".<br><br>What is your favorite military-themed fictional book that you have read? Did it inspire you to join a particular Service Branch? What else did it inspire you to become?<br><br><br><div class="pta-link-card"><div class="pta-link-card-picture"><img src="http://upload.wikimedia.org/wikipedia/en/thumb/9/99/Question_book-new.svg/50px-Question_book-new.svg.png"></div><div class="pta-link-card-content"><div class="pta-link-card-title"><a target="_blank" href="http://en.wikipedia.org/wiki/Team_Yankee">Team Yankee - Wikipedia, the free encyclopedia</a></div><div class="pta-link-card-description">Team Yankee is a speculative fiction novel written in 1987 by Harold Coyle, then a major in the United States Army, whose subject is the actions of a company-sized armor unit of the United States Army...</div></div><div style="clear:both"></div><div class="pta-box-hide"><i class="icon-remove"></i></div></div>
Edited 6 y ago
Posted 6 y ago
Responses: 35

MAJ (Join to see)
>1 y
An excellent, thought-provoking book, and one of my favorites.

Too bad they dumbed it down to the point of being unrecognizable when they made the movie.
(0)
Reply
(0)

COL Jean (John) F. B.
Posted 6 y ago
The whole W.E.B Griffin "Brotherhood of War" series. I could really relate to the characters and to the locations. Very true to life.

LTC (Join to see)
>1 y
Agree completely! Read that series when I was in ROTC and thorougly enjoyed every book. Perhaps I should reread them now ...
(1)
Reply
(0)

I first read them in the 1983-84 time-frame and re-read them a few years ago. Well worth the effort. It is funny how the passing of time and the experiences that go along with that passing allows you to have a new perspective on things you read. I believe I enjoyed them more the second time I read them, than the first.
(0)
Reply
(0)

Maj Matt Hylton
>1 y
Great series - it was the first set of his I read while I was still in ROTC.

I love his work on the Presidential Agent series as well. It's more modern day and "fictitiously" reflects current problems associated with Russia and terrorism.
(1)
Reply
(0)

I have read his Presidential Agent series, as well, but really enjoyed the Badge of Honor series more. I love military-based books and police-based. The Badge of Honor series is police-based and written in the same style as the Brotherhood of War series. Great characters that you follow throughout the series. Check them out. I think you would like them, as well.
(0)
Reply
(0)

MAJ (Join to see)
>1 y
Read this one as a kid, and loved it. The books that follow it are very good, as well, although less military-themed.
(0)
Reply
(0)
Show More Comments
Read This Next
RallyPoint Home