About 34 passengers from the Grand Princess cruise ship off the California coast are expected to be transported to Dobbins Air Reserve Base in Marietta, Georgia, for quarantine once the ship docks, according to Georgia Gov. Brian Kemp.

In statements Saturday night and via Twitter Sunday, Kemp said he had learned that 34 Georgia residents and possibly additional U.S. citizens from the eastern U.S. currently aboard the ship "will be securely transferred to Dobbins Air Reserve Base in Marietta, Georgia."


The passengers are expected to arrive late Monday or early Tuesday at Dobbins, where they would undergo testing and be quarantined for exposure to the coronavirus, or COVID-19, Kemp said.

Kemp said he was confident that Dobbins would provide a site for high-quality care "while keeping Georgia families safe, and our state stands ready to assist our federal partners if requested."

The 94th Airlift Wing public affairs office at Dobbins, about 20 miles northwest of Atlanta, did not immediately confirm Kemp's remarks, but said in a statement that the Defense Department was coordinating with the Department of Health and Human Services on "lodging requirements for quarantine operations for the passengers currently aboard the Grand Princess."

"As with previous efforts, DoD would provide housing and HHS would be responsible for the aspects of the quarantine," the statement said.

A Pentagon spokesman also did not immediately confirm that cruise ship passengers were headed to Dobbins, but noted that military bases had been used previously to quarantine suspected cases of coronavirus.

Multiple military installations, including Lackland Air Force Base in Texas and Travis Air Force Base in California have previously been used to house U.S. citizens returning from China or from the Diamond Princess cruise ship that was off the coast of Japan.

The Defense Department has also previously said that no DoD personnel would come in contact with suspected coronavirus patients, whose care and monitoring would be the responsibility of HHS and the Department of Homeland Security.

California's Office of Emergency Services officials said in a statement Sunday that a joint state and federal effort would get underway Monday to disembark passengers from the Grand Princess in the port of Oakland.

The ship will stay in port only for as long as it takes to disembark the passengers, according to the statement, and the crew will remain aboard to be treated in quarantine.

"Passengers who require acute medical treatment and hospitalization will be transported to health care facilities in California," officials said.

California residents among the passengers who don't require immediate treatment are set to be taken to a thus-far unspecified "federally-run isolation facility" in California.

Those passengers who are not California residents "will be transported by the federal government to facilities in other states," OES officials added.

On CBS' "Face the Nation" Sunday, U.S. Surgeon General Jerome Adams said the government was "still working" to determine which federal facilities would be used to quarantine the Grand Princess passengers.

The ship is carrying more than 3,500 passengers and crew, and thus far a total of 19 crew and two passengers have tested positive for coronavirus, Vice President Mike Pence said at a news conference Saturday.

-- Richard Sisk can be reached at [login to see] . 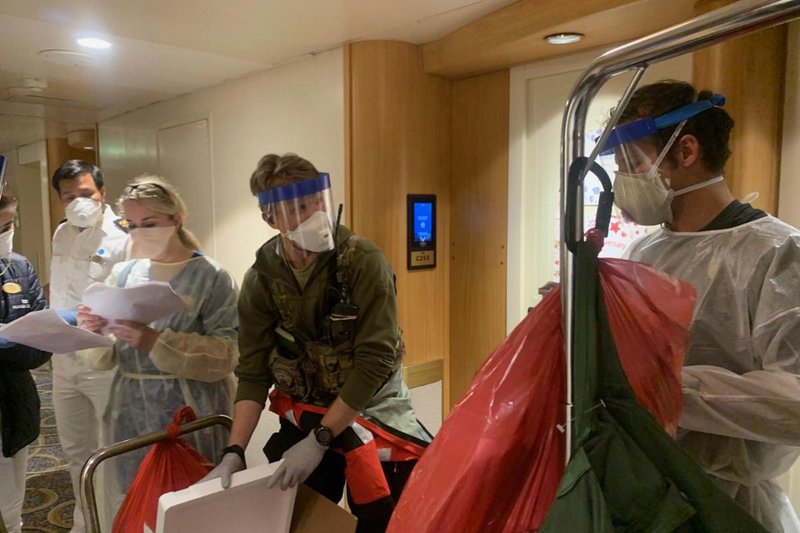 Posted from military.com
Posted in these groups: Centers for Disease Control and Prevention

MAJ Ken Landgren
Posted 3 mo ago
I think we will be in a shit ton of trouble if we need mass quarantines and hospitalizations.
(2)
Comment
(0)

PVT Mark Zehner
Posted 3 mo ago
Will be interesting!
(1)
Comment
(0)