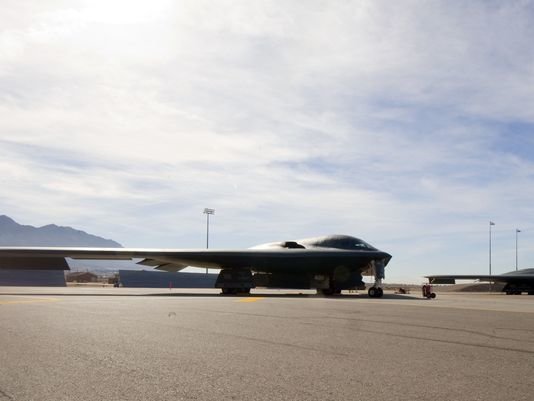 The B-2 stealth bomber is one of the Air Force's youngest aircraft, but its maintenance and modernization needs are great. To meet those needs, the services has an effective maintenance program and is seeking authorization for multiple modernization projects in its fiscal 2016 budget, a top acquisition official told lawmakers Wednesday.

William LaPlante, assistant secretary of the Air Force for acquisition, credited new sustainment programs with keeping the B-2 Spirit in the air. The aircraft in fiscal 2014 flew at a mission capable rate of 56.9 percent, up from 46.7 percent the year before.

The increase is because of a "cost effective" program to sustain problem areas of the stealth bomber, namely the stealth materials on its skin, LaPlante said.

"In fact, one of the biggest contributors to the availability challenge is the maintenance of those materials," LaPlante told the House Armed Services projection forces subcommittee. "That's something going in the right direction. The availability is getting better because of that work."

The service only flies 20 of the B-2s. With a constant rotation of the jets in scheduled depot maintenance, the mission-capable rate of the aircraft has been lower than those of other aircraft in the service's fleet. The depot cycle takes approximately 13 months at Northrop Grumman's Plant 42 in Palmdale, California. About 70 percent of the B-2's programmed depot maintenance tasks is related to treating the low-observable coating system, according to the Air Force.

The biggest modernization priority is an effort to upgrade the jet's Defensive Management System, which includes new on-board computers and antenna systems.

"If we don't do DMS, we won't have the capability to operate in a modern, contested environment," LaPlante said.

The service is also operating other software on the jet, including a new weapons strike program that will let it carry advanced weapons such as the modernized B61-12 nuclear bomb.

Capt Richard P.
Posted >1 y ago
Because if there's one thing we need, it's more money for the Air Force to spend on planes applicable against only a near peer in a total war scenario.
(2)
Comment
(0)

Lt Col John (Jack) Christensen
Posted 1 mo ago
Of course it does, it's a 30+ year old aircraft. Every aircraft must go through upgrades and modernization to keep it combat capable, the B-2 is no different.
(1)
Comment
(0)
Read This Next
RallyPoint Home