Launched from bases all over the United States, Air National Guard fighter and tankers moved quickly to protect America from further attacks on September 11, 2001. That morning 19 terrorists employed four hijacked airliners to destroy the World Trade Center in New York City and severely damage one section of the Pentagon. The attacks, which were executed by a shadowy radical Islamic group known as al-Qaeda, killed some 3,000 people during the bloodiest terrorist assault in U.S. history. American Airlines Flight 77, which had just taken off from Dulles International Airport in Northern Virginia on a flight to Los Angeles, was seized by al-Qaeda terrorists and crashed through the Pentagon’s western wall at 9:37 a.m. North Dakota’s 119th Fighter Wing was stationed at the North American Aerospace Defense Command site on Langley AFB, Virginia. Shortly after the attack the 119th’s F-16 fighters established a combat air patrol over the nation’s capital. In addition to all the passengers aboard Flight 77, 125 people inside the Pentagon were killed and over 600 others were injured seriously enough that they had to be transported to local hospitals.

The North Dakota Air Guardsmen were joined that day by F-16s from the District of Columbia’s 113th Wing, based at Andrews AFB, Maryland and Virginia’s 192nd Fighter Wing from Richmond, as well as active duty Air Force and Navy fighters. Those fighter pilots were under orders to use deadly force if necessary to protect the nation’s capital from further attacks. Within 24 hours of the terrorist attacks, 34 ANG fighter units across the country had launched aircraft. Fifteen of the units flew 179 combat air patrols, presidential escorts, and Federal Emergency Management Agency support missions. In addition, ANG tanker, airlift and rescue units flew scores of sorties that day. Hundreds more Air Guard personnel from various support fields including chaplain services, civil engineering, combat communications, medical and security forces were either activated or notified to stand-by for emergency duty. The majority of Air Guardsmen involved in responding to the 9/11 national emergency were traditional members of their units who volunteered to help defend their country on that terrible day.

Continuous combat air patrols were maintained over Washington, DC and New York City until the spring of 2002. The bulk of those missions, conducted under the auspices of Operation Noble Eagle, were flown by Air Guard pilots. Ironically, one result of the terrorist attacks was the saving of the continental air defense mission. It had been viewed as a fading post Cold War “sunset mission” by some senior military officers and high level government officials, but the attacks of 9/11 inspired a major effort to build a coherent homeland defense system for the continental United States against terrorism and other threats. 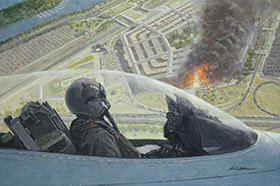