CW5 Jack Cardwell
266
11
4
6
6
0
National Guard Artwork: "Hell's Wench," a B-24 badly damaged by anti-aircraft artillery fire, led the 93rd Bombardment Group (Heavy) in its daring low-level attack on the oil refineries at Ploesti, Romania, which supplied two-thirds of Germany's petroleum production at that stage of World War II. Lt. Col. Addison E. Baker, an Ohio National Guardsman who commanded the 93rd, ignored the fact he was flying over terrain suitable for safe landing. He refused to break up the lead formation by landing, and led his group to the target upon which he dropped his bombs with devastating effect. Then he left the formation, but his valiant attempts to gain enough altitude for the crew to escape by parachute failed and the aircraft crashed. For their gallant leadership and extraordinary flying skill, both Baker and his pilot, Maj. John L. Jerstad, received the Medal of Honor, posthumously. The raid, nicknamed "Operation Tidalwave," was costly, with 54 of the 177 bombers lost and 532 of the 1,726 personnel engaged listed as dead, missing or interned. Baker's service epitomized the role of National Guard aviators during World War II. Because of their experience, most of them were transferred from their 29 pre-war observation squadrons after mobilization. As individuals, they helped train and lead the huge numbers of volunteer airmen who served in Army Air Force units during the war. Baker and other Guard aviators carried on a long tradition of dedicated service to the states and nation. 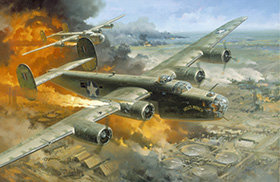