CSM (Join to see)
25.4K
359
221
29
29
0
For anyone that would like to celebrate the Army National Guard Soldier SGT Shelby Atkins' trail blazing accomplishment, please post your congratulatory message. Please "Hunt the Good Stuff" in your post and share what this means to you.

***Update - for those of you that want to complain, tear down, insult, degrade, spew out hate instead of celebrate this accomplishment that is your choice, but please go to the same article in a parallel discussion. There are others there that will be happy to complain with you. Thank you for your cooperation.***

In the Army our Master Resilience Trainers promote "Hunt the Good Stuff." This Resiliency Skill improves Optimism, and helps people reframe their thinking to focus on the good in life. When we focus on all the things we have to celebrate, be thankful for, and truly appreciate, it actually boosts your immune system, creates heart coherence, lowers blood pressure, and the desire to take better care of ourselves. 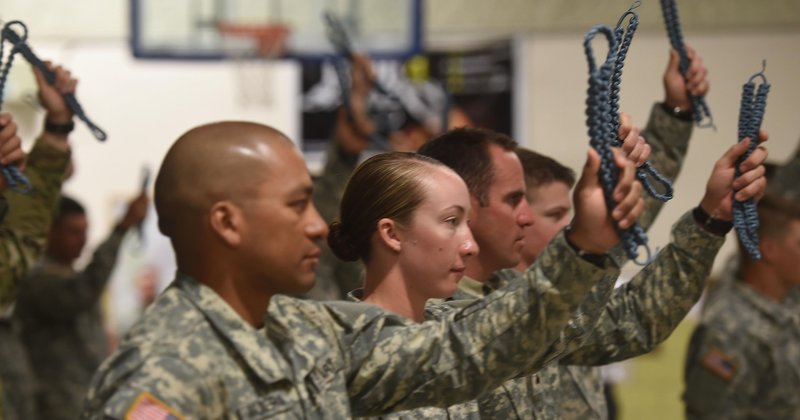 SGT Dave Tracy
Edited >1 y ago
Posted >1 y ago
Graduating with your blue cord is not the finish line non Infantry (to include politicians, activists, civilians in general) think it is; graduation merely buys your ticket to the STARTING line. That is not to praise or condemn anyone or any group of people; just for understanding.

But I can't help but notice, 2 EFFING WEEK RECLASS COURSE? For Infantry?! WTF?! I had to go for a 4 week reclass just to drive Army trucks...which in 1 form or another I had been doing my whole Army career. What kind of grunts are THESE guys going to be?!
(18)
Comment
(0)
show previous comments

CSM (Join to see)
>1 y
CPT L S - Wow. Well said. I do believe in building people up instead of tearing them down. Tonight we celebrated my Mother-in-Law's life. I truly loved her. No one can tear down or destroy that celebration. :)
(0)
Reply
(0)

SSG Robert Webster
>1 y
SFC James J. Palmer IV aka "JP4" and SSG (Join to see) it is real easy for some of these items to get off track so quickly when individuals are blocked from making a comment to begin with in response to an individuals comment about said subject. Then the same individual instead of making an appropriate response then starts making personal attacks instead of responding to the subject at hand.

I would suggest that you would review the comments made by said Anonymous individual in this overall thread about me and look at my statements that led up to that personal attack.

Real interesting that said individual then goes on to state - "
I have never made any malicious attacks against anyone based on race and sex, that is just another gross distortion, or lie, from 1SG Burke."

This is how some of these discussion threads get hijacked.
(1)
Reply
(0)

Roger that. SSG Robert Webster. Is this ok with you?

SSG Robert Webster
>1 y
CPT (Anonymous) - Quite an interesting statement, from someone that will make a comment about a persons statement and then will not let them respond appropriately.
In addition, you may want to change your tone about what a personal attack is. And I will give you a couple of examples from this very discussion thread - when someone is asked to back up a statement that they have made due to their position and training and then is called on it, that is not a personal attack; however, when you call someone a troll and make other disparaging remarks about an individual, that is a personal attack.
Last but not least, when someone questions an individuals qualifications due to a statement that they have made, that is not a personal attack either, especially when said statement conflicts with regulations and other policies and common sense; instead of calling them a troll, back up the statement with the appropriate references, and that does not just apply to me but others as well.
Friendly piece of advice - when you make a statement that combined with the information you have made public in your profile does not pass the smell test, expect to be questioned publicly about it. That is not a personal attack either.
SFC James J. Palmer IV aka "JP4"
(0)
Reply
(0)

1SG Michael Bonnett
Posted >1 y ago
Two week re-class....into Infantry? What about the troops that will die under her command if they get deployed?

Anyone thinking this is a good idea or something to celebrate is a idiot or a boot licking politician disguised as a soldier....
(17)
Comment
(0)
show previous comments

SGT Ambrose Husser
>1 y
I'm said to see such stupidity from a 1SG . Wemone are physically different but not lacking in ability or motivation. This is 2015 we use or minds more than muscles. To fight in today's modern warfare we need to wemone who can proform combat M.O.S.'s. I have personally worked with wemone in combat and they held there own as well as anyone else. In fact there motivation was admirable. Wemone can proforma surchis that would violate cultural believes if men preformed them and wemone can get information that people are afraid to tell a man. For anyone to judge a solider for any reason other than there proformance and skill is to harking back to a times when black men were not good enough to fight.Such views have no place in a modern Army
(0)
Reply
(0)

SrA Gabe D.
>1 y
SGT Ambrose Husser - I wasn't going to say anything, but before claiming anyone on stupidity, your whole comment is plagued with misspellings. Please check your grammar before ridiculing anyone else. Other than that, appreciate your service.
(0)
Reply
(0)

SGT Benjamin Charleston
>1 y
Cuss words do not belong here in an open forum. Be a gentleman.
(0)
Reply
(0)

SFC Joe S. Davis Jr., MSM, DSL
Posted >1 y ago
CSM (Join to see) this is faboulous SGT Shelby Atkins is a trend setter and I wish for her a successful career.
(16)
Comment
(0)

CSM (Join to see)
>1 y
I know it is great to help her celebrate this great accomplishment.
(3)
Reply
(0)
Show More Comments
Read This Next
RallyPoint Home