On this day in 1876, Congress established at New Bedford the first School of Instruction to train officers for the Revenue Service. The Service traced its history back to 1790 when Congress decided it needed to ensure that vessels entering United States ports paid tariffs on their cargo. In other words, they wanted to prevent widespread smuggling. Over the years, the Revenue Service took on additional responsibilities — protecting American ships from pirates, intercepting slavers after the Atlantic slave trade was banned, and assisting vessels in distress. In 1915 it merged with the Life-Saving Service and was renamed the United States Coast Guard. At that point the School of Instruction became the Coast Guard Academy, which has been located in New London, Connecticut, since 1910.

Every graduate of the USCG Academy, the successor to the School of Instruction, spends time training on a sailing vessel.

The men and women who serve in the United States Coast Guard have a remarkable array of responsibilities, from rescuing mariners to intercepting drug smugglers, from inspecting commercial vessels to maintaining navigational systems. This wide range of duties is a direct result of the Coast Guard's history; it includes what were once five distinct federal agencies — the Revenue Cutter Service, the Life-Saving Service, the Lighthouse Service, the Steamboat Inspection Service, and the Bureau of Navigation.

The oldest was the Revenue Cutter Service. Smuggling was widely tolerated in colonial America because it undermined much-hated tariffs imposed by England. Since time immemorial, smuggling has also been highly profitable, an equally attractive incentive. However, once the new Republic was dependent on tariffs it levied on imports, something had to be done to curtail the practice. When the Tariff Act of 1789 failed to bring in the anticipated revenue, Secretary of the Treasury Alexander Hamilton proposed a "system of Revenue Cutters." Congress authorized it on August 4, 1790.

Smuggling was widely tolerated in colonial America because it undermined much-hated tariffs imposed by England.

The government originally ordered ten cutters. The first and largest was the two-masted schooner Massachusetts, built in Newburyport and launched in 1791, giving that city claim to being the birthplace of the Coast Guard. Hamilton counseled the officers of all cutters to patrol with "vigilance and firmness marked with prudence, moderation and good temper." They were not to stay in one spot, but to meet all incoming vessels, inspect them, and escort them to the nearest Customs House.

In 1797 with British and French privateers harassing American vessels, Congress authorized President John Adams to use Revenue Cutters as a system of "defense against hostilities near the coast," to protect both the coast and incoming commerce. The following year, Congress ordered the Revenue Service to cooperate with the newly established Navy in times of war or when so directed by the President — a mandate that is still in force today.

The first war in which the Revenue Service saw action was the War of 1812. When peace returned, the cutters resumed their regular duties. They also were charged with protecting American ships from pirates and intercepting slave ships. By the outbreak of the Civil War, Revenue Service sailors had boarded dozens of slave vessels and freed almost 500 enslaved Africans.

Hamilton counseled the officers of all cutters to patrol with "vigilance and firmness marked with prudence, moderation and good temper."

The Service acquired another mission in 1831, when Secretary of the Treasury Louis McLane determined that it was "proper to combine with the ordinary duties of the Cutters that of assisting vessels found on the Coast in distress, and of ministering to the wants of their crews."

McLane noted that morale in the Revenue Service was low, in large part because the appointment and promotion of officers involved politics more than merit. He insisted that "vacancies be filled by promotions from among the officers in the service." It would be another 55 years before Congress established the first cadet training program.

In May of 1877 the first nine cadets arrived at the School of Instruction for the Revenue Service in New Bedford to begin their two-year program. Part of their training took place on board the Dobbin, a 94-foot schooner. Thus began a tradition that has continued to the present day. Every graduate of the USCG Academy, the successor to the School of Instruction, spends time training on a sailing vessel.

By the outbreak of the Civil War, Revenue Service sailors had boarded dozens of slave vessels and freed almost 500 enslaved Africans.

Yet another expansion of the Revenue Cutters' duties had taken place in 1867, when the United States acquired Alaska from Russia. Besides identifying sites for new customs houses and "probable haunts for smugglers," the cutter Lincoln was ordered to "make surveys . . . locate fishing banks, inquire into the physical characteristics and resources of coastal areas, and to collect specimens for the Smithsonian Institution."

In 1915 Congress merged the Revenue Service with the Life-Saving Service, which had been rescuing people off vessels in distress close to shore since 1850. The new agency was called the United States Coast Guard. In 1939 the Lighthouse Service was folded into the USCG, and seven years later, so was the Bureau of Marine Inspection and Navigation. 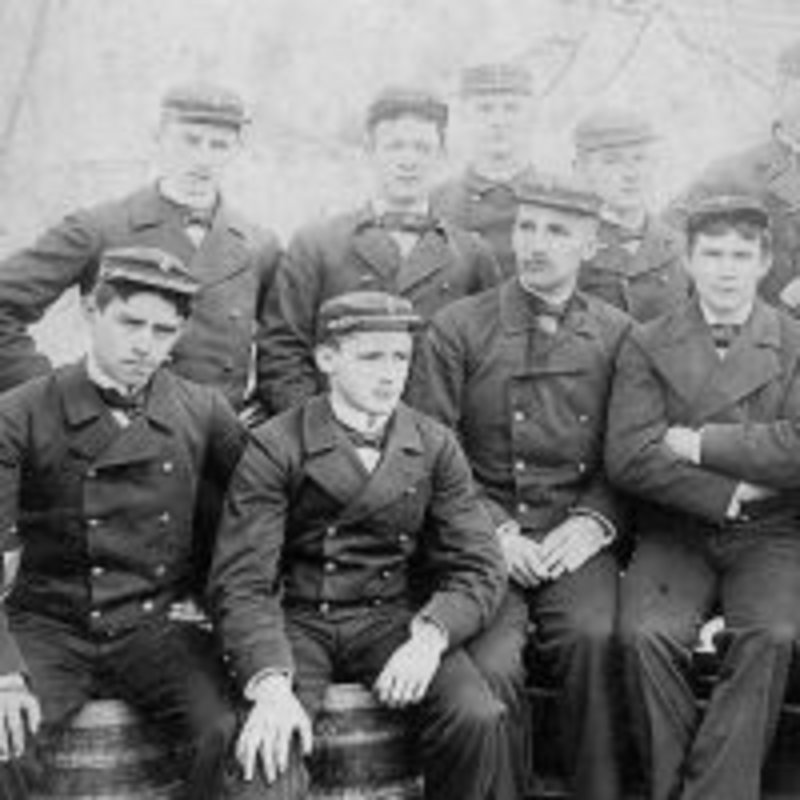 Posted from massmoments.org
Posted in these groups:

LTJG Richard Bruce
Posted 9 d ago
USCGA Mission
“To graduate young men and women with sound bodies, stout hearts and alert minds, with a liking for the sea and its lore, and with that high sense of honor, loyalty and obedience which goes with trained initiative and leadership; well-grounded in seamanship, the sciences and amenities, and strong in the resolve to be worthy of the traditions of commissioned officers in the United States Coast Guard in the service of their country and humanity.”
(1)
Comment
(0)