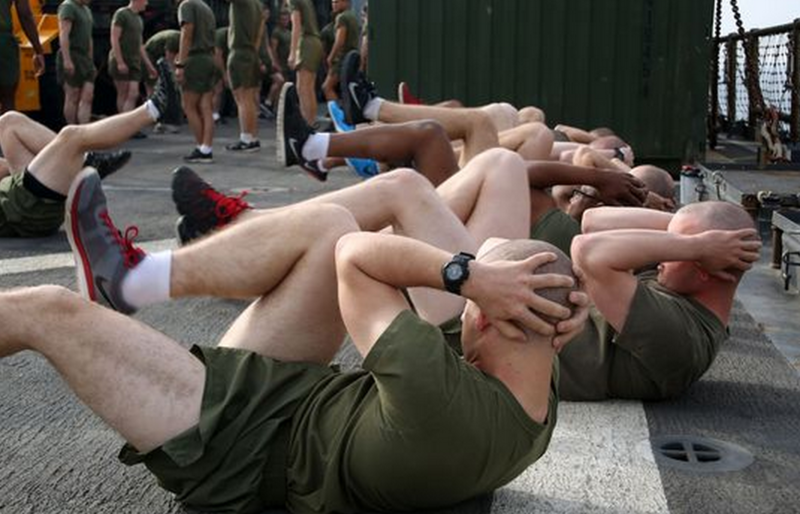 The Navy is doing away with the much-maligned neck-and-torso tape test that many have criticized for years as wildly inaccurate, but Marines have something new to be hot about: relaxed physical fitness standards for sailors that allow higher body fat percentages.

The Navy changes are part of an initiative pushed by Navy Secretary Ray Mabus to focus on holistic health, curb risky weight-loss methods and stem an exodus of talented sailors. It’s a shift away from a punitive system that punishes sailors for failing fitness tests toward one that encourages year-round fitness, with a focus on helping those who are struggling in that regard.

At the request of Mabus, the Marine Corps is conducting its own review of fitness standards, although what Marine leaders might change, if anything, remains to be seen. Results are not expected until the end of August.

The Navy has already released a host of changes to their fitness regulations in response to critiques from sailors who crammed to make weight under the former system. Sailors are transitioning to a waist-only tape test that sets a maximum of 39 inches for men and 35.5 inches for women. That’s similar to the test used by the Air Force.

Other Navy initiatives include healthier food choices that do away with fried foods in chow halls and add color-coded dishes, with green labels signifying the healthiest choices.

The Navy also plans to run a pilot program in the Pacific Fleet and Navy Reserve using wearable fitness trackers like Fitbits.

While many Marines say they’d like to do away with the Corps’ current tape test, which measures the waist and neck to calculate body fat percentage, some say the Navy appears to be taking a step toward relaxing fitness standards. And Marines say they want no part of that.

“I don’t think the standards should change at all, but the method of measurement should,” said former Cpl. Joshua Naylor, who left the Marine Corps in 2014.

Naylor said he felt his career was in jeopardy whenever he faced the tape test even though he’s a competitive body builder and Marine Corps Martial Arts Program instructor who earned top Physical and Combat Fitness Test scores.

The former motor vehicle operator, who now works as a physical trainer, is about 5-feet, 11-inches tall and weighs 198 pounds.

Naylor’s experience with the tape test left him longing for a new system, but he said he opposes one that might allow Marines who aren’t in shape to remain in uniform with no repercussions.

Instead, he’d like to see both sea services look into using skin calipers to measure body fat, which he says are far more accurate than the tape test.

“I was competing in body building competitions for three-fourths of my career,” said Naylor, whose last assignment was at Marine Corps Mountain Warfare Training Center near Bridgeport, California.

“I was 7 percent body fat at my highest and 4 percent at my lowest. I competed one time right before I weighed in and taped and it said I was at 19 percent. No way can you compete at 19 percent.”

Calipers are a good solution for Marines and sailors, he said. The system is fast, more accurate, and measurements are easy to administer.

Another Marine, who is based in Kansas City, Missouri, and spoke on the condition of anonymity, said Marines used to ask him for advice to cut weight since he is also a bodybuilder who notches top PFT scores. He said he often sacrifices performance to make weight.

“Once I start dropping weight, I lose a lot of strength to do a lot of stuff that I can [do] when I’m heavier,” he said. “When it comes down to it, I love the Marine Crops more than being large, so I’ll lose weight every time.”

That runs counter to the very reasons for the Navy’s recent revisions. As Vice Adm. Bill Moran, chief of naval personnel, put it July 28: “Fitness should truly be about being healthy and mission readiness — are you physically fit for times of combat and stress in the fleet?”

As for the Navy’s idea to offer more healthy food choices, both Marines said they’d support it. But Marines should still be given the option to choose fatty or fried foods if they want them, Naylor said.

The idea of having Marines wear Fitbits or other devices to track their fitness levels was less popular.

“I think that is a completely ridiculous way to approach it from a financial standpoint,” Naylor said.

He and the Kansas City Marine agreed that if service members want a Fitbit, they should purchase their own.

Both said they see that device as overkill if the goal is simply to maintain basic fitness.

http://www.marinecorpstimes.com/story/military/2015/08/08/marines-slam-navys-new-fitness-rules-call-better-body-fat-test/31253095/
Posted in these groups:

MAJ (Join to see)
Posted >1 y ago
The Army would do well to eliminate the current tape test as well. I remember a few tears back my wife being counseled and put on the AWCP after scoring a 322 on her APFT because she failed the tape test by 1%. A Soldier I deployed with passed tape, but after working improve his fitness he lost 15 lbs. While he was more physically capable he failed the tape test because he'd lost some of the weight off of his neck. Meanwhile we see troops obviously overweight passing no problem.
(4)
Comment
(0)

LtCol Jay Reidy
Posted >1 y ago
Why is the Marine Corps even wasting its time with the Navy's PT?
(1)
Comment
(0)
Show More Comments
Read This Next
RallyPoint Home