LTC Stephen F.
13.4K
51
25
16
16
0
http://www.wargame.ch/wc/acw/Newsletters/March04/confederate_states_marine_corps.htm
150 years ago the confederate States of America established the CSA Marines Corps. The CSA MC.
"The Provisional Confederate Congress established the C.S. Marine Corps under the act of March 16, 1861. The act, providing for the organization of the navy, authorized a corps of marines to consist of one major, one quartermaster sergeant, and six companies of one hundred men each. Later an amendatory act of May 20, 1861, increased the size of the corps and raised the rank of headquarters officers. During the war, marines served in small detachments on land and at sea. Many recruits and new officers trained at Camp Beall at Drewry's Bluff, Virginia. Confederate marine guard detachments served at naval stations at Richmond, Wilmington, Charleston, Savannah, Mobile, and Charlotte. Marine detachments were also assigned to many of the larger vessels of the C.S. Navy."
"The National Archives and Records Administration (NARA) maintains the fragmentary records relating to the C.S. Marine Corps such as Confederate muster rolls, shipping articles, clothing receipts, descriptive rolls, and payrolls. Headquarters records were destroyed around the time of the evacuation of Richmond on April 2, 1865, including corps records kept at Colonel Beall's house. Lt. Nathaniel E. Venable, assistant to the quartermaster, took records of that department to Danville, Virginia, where they too were destroyed.4
The good news for those navigating this rarely traveled road is that a few historians have paved the way. In addition to several articles on this subject is Ralph W. Donnelly's book, The Confederate States Marine Corps: The Rebel Leathernecks (1989). The author begins by focusing on the first year of the war and provides background on the organization of the corps including various Confederate laws establishing and expanding the Confederate Marine Corps. The book continues by describing duty ashore in Virginia, Alabama, Georgia, North Carolina, and South Carolina. One chapter provides information on marines serving on board Confederate ships. Donnelly also concentrates on life as a Confederate marine, providing a chapter each on enlisted men and officers. The appendix contains a list of Confederate marines taken prisoner at Fort Fisher on January 15, 1865.
To research officers, consult the Register of Officers of the Confederate States Navy, 1861 - 1865 (1931) and the more descriptive "Biographical Sketches of Marine Officers" in Donnelly's Rebel Leathernecks. For enlisted men, consult Donnelly's earlier work, Service Records of Confederate Enlisted Marines (1979). This book is arranged alphabetically by name of marine and provides a brief description of service. As an example, the following is information provided in Donnelly's book for enlisted marine John W. Barry:
Co. A. Private enlisted New Orleans, 5/8/61. On CRR [clothing receipt roll] Capt. Holmes comd., c. 5/10/61. Corporal as of 7/25/61. Presumably served at Pensacola until company transferred to Savannah c. 9/18/61. On Ga. & S.C. Stations [Savannah] 9/1/-12/3/61. On board CSS Savannah 1/23/62 and 3/25/62. Transferred with company to Drewry's Bluff c. July 1862. Assigned Marine Guard, Navy Yard opp. Rocketts [Richmond], by 10/8/63; on this duty through 4th Qr. 1864. Charged for canteen and strap lost at Wilmington 9/30/64. Took oath to US in Richmond, Va., 8/24/65. Age 36 in 1865; occupation: farmer; residence Alabama." 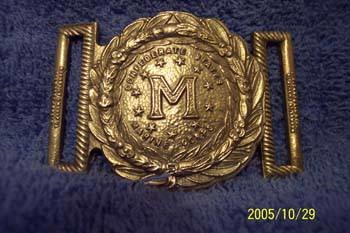 MAJ (Join to see)
Posted 5 y ago
There were CS marines on board the CSS Shanandoah. It was the only CSN ship to circumnavigate the globe (to include stops in Micronesia--commemorated on that island's modern postage stamps) as well as docking in Melbourne Australia to a warm welcome down under. Australia was UK territory and UK was officially neutral. US consulate office at that time protested strongly and the Confederates had to weigh anchor and amscray from Australian territorial waters but not before Melbourne hosted a large "Buccaneer Ball" for the rebels.
(4)
Comment
(0)

Capt Daniel Goodman
Posted >1 y ago
I'd read about it and the Confederate naval academy, interesting little historical tidbits....
(4)
Comment
(0)

As I'd said, I'd known about this, I figured it'd be relevant here....