Do you remember this making the rounds? Definitely a Must Read! 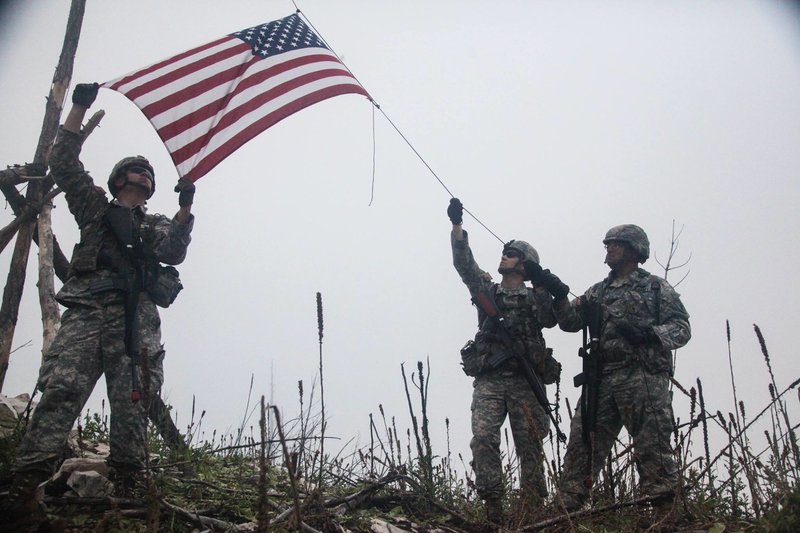 For those of us who know what you do, your sacrifice will never be forgotten... Semper Fi
--

Hello America, my name is Nick Palmisciano and I wrote the essay below, not General David Petraeus, “A Marine in Iraq”, General Schwarzkopf, any of the wounded warriors it’s been attributed to, or anyone else.

The order of events went something like this:
1) I was talking over with Tom Amenta, my COO, about how the world has changed over the years relative to military service. We had the Occupy Movement as the backdrop.
2) At the end of our conversation, I sat down and wrote this essay and posted it to Ranger Up.
3) The US Army reposted it on their Facebook page, which was a huge honor for me. It received tens of thousands of likes in a day. They attributed the post to me at the bottom. This was a huge honor for me as I felt I had addressed the feelings of many service members. I write a lot, but I had never touched a chord with our community the way I had with this one.
4) In the next few weeks and months I started receiving spam letters or seeing incorrect blog posts attributing this essay to various people. The Ranger Up fans did such a great job of correcting people that I didn’t get involved.
5) Now, there is an almost universal belief that General Petreous wrote this. It’s on blogs. I’ve received many emails about how we “should post it”.

So I’m posting it, again, just like I did when I wrote it.

Thanks for all the support!

I remember the day I found out I got into West Point.

My mom actually showed up in the hallway of my high school and waited for me to get out of class. She was bawling her eyes out and apologizing that she had opened up my admission letter. She wasn’t crying because it had been her dream for me to go there. She was crying because she knew how hard I’d worked to get in, how much I wanted to attend, and how much I wanted to be an infantry officer. I was going to get that opportunity.

That same day two of my teachers took me aside and essentially told me the following: “Nick, you’re a smart guy. You don’t have to join the military. You should go to college, instead.”

I could easily write a tome defending West Pont and the military as I did that day, explaining that USMA is an elite institution, that separate from that it is actually statistically much harder to enlist in the military than it is to get admitted to college, that serving the nation is a challenge that all able-bodied men should at least consider for a host of reasons, but I won’t.

What I will say is that when a 16 year-old kid is being told that attending West Point is going to be bad for his future then there is a dangerous disconnect in America, and entirely too many Americans have no idea what kind of burdens our military is bearing.

Over time, fewer and fewer people have shouldered more and more of the burden and it is only getting worse. Our troops were sent to war in Iraq by a Congress consisting of 10% veterans with only one person having a child in the military. Taxes did not increase to pay for the war. War bonds were not sold. Gas was not regulated. In fact, the average citizen was asked to sacrifice nothing, and has sacrificed nothing unless they have chosen to out of the goodness of their hearts.

The only people who have sacrificed are the veterans and their families. The volunteers. The people who swore an oath to defend this nation. You.

You stand there, deployment after deployment and fight on. You’ve lost relationships, spent years of your lives in extreme conditions, years apart from kids you’ll never get back, and beaten your body in a way that even professional athletes don’t understand. And you come home to a nation that doesn’t understand. They don’t understand suffering. They don’t understand sacrifice. They don’t understand that bad people exist. They look at you like you’re a machine – like something is wrong with you. You are the misguided one – not them. When you get out, you sit in the college classrooms with political science teachers that discount your opinions on Iraq and Afghanistan because YOU WERE THERE and can’t understand the “macro” issues they gathered from books with your bias. You watch TV shows where every vet has PTSD and the violent strain at that. Your Congress is debating your benefits, your retirement, and your pay, while they ask you to do more.

But the amazing thing about you is that you all know this. You know your country will never pay back what you’ve given up. You know that the populace at large will never truly understand or appreciate what you have done for them. Hell, you know that in some circles, you will be thought as less than normal for having worn the uniform. But you do it anyway. You do what the greatest men and women of this country have done since 1775 – YOU SERVED. Just that decision alone makes you part of an elite group.

Never in the field of human conflict has so much been owed by so many to so few.

http://rhinoden.rangerup.com/i-wrote-this/
Posted in these groups:

1SG (Join to see)
Edited >1 y ago
Posted >1 y ago
Oh, and how we paid for it...
My personal cost:
My marriage
My right knee
Four of my Soldiers
Five years with my young children
Ten years (and counting) of nightmares
An Afghan merchant (and his whole Family) I had befriended and had to burn to get the mission done. No matter how many times I replay it, I can't justify it. The Taliban did things to them that no rational person could even conceive of.
A generation of schoolchildren, 31 in all, killed in a forgotten village in Ninewah Province, Kall Tayf, because we just had to find that safe house. Each and every one of those kids will not be forgotten by their families, nor will I ever forget so many quiet spring mornings playing soccer or pushing them on the swings because I missed my children at home and so the THT guy could template where the Abu Sayaf safehouse was. The resulting bombing ruined all of those lives and taught me a terrible lesson on third-order effects.

Some things you can't put a value on. Some gave more, some less. But we all paid a high price for serving these past 14 years.

No medal can replace or even really quantify what that cost me. I don't need the praise of others or the honors from a politician or even the satisfaction of a job well done. The best thing I ever got was a phone call in the night from a Soldier I had led many years before, who had heard through the grapevine that I was hurting. He told me how I had helped him years before and how much it had meant to him, and that he felt compelled to call and do what he could to repay a debt that he felt he had.
I didn't know what to say, but knowing that I had made a difference to him when it mattered most made a tremendous impact.

I should be thankful; I have all my limbs, my eyesight, my sanity. Many don't.

99 1/2% of the country will never truly understand, and many who were there didn't have the same experience. But we all paid. Many of us still are.
(27)
Comment
(0)
show previous comments

MAJ Robert (Bob) Petrarca
>1 y
Holy smokes! You must be one strong individual Top! I hope through all this you have found peace and piece of mind.
(3)
Reply
(0)

SPC Charles Brown
Posted >1 y ago
We cannot expect everyone to understand why we do what we do. There are a few civilians who get that this nation would not be what it is today without the military ensuring their rights to freedom of speech and the other guarantees (soon to be broken promises) written in the first 10 Amendments to our Constitution. Without us where would they be?

Loved the sentiment in the letter when I first read it. Still rings true today. Thanks for sharing this LCpl Brett McMeans.
(8)
Comment
(0)

SFC (Join to see)
Posted >1 y ago
I have to admit, that I defiantly stand there and tell my kids at work to always remember that they are the less than 1% that actually took that step. Then I read this, and then I read 1SG Healy's comment and suddenly feelings that I keep buried rushed back and it is tough. It is tough to put to words actually. I did not have all of the experiences that 1SG had, but a lot I can say yeah those are true.
Taking a TBI out country, dealing with the after effects of that even today (not getting the PH to go with it).
Having nothing to show for all of the time that I lost with my family and suddenly my daughter is graduating. Yeah I can say I totally agree.
Here is the thing though, I would NOT go back and change things. I would go back down range even knowing what I know now (the biggest reason that I wanted my PH was to ensure that my daughter was cared for with those added benefits), it is not due to any recognition. Plus I think the aggravation that it has caused me not remembering things most of the time earned it. Anyway, my command cheated me out of that. I digress.
Point is, I would not change it, I would still chance everything, because it gave me that feeling that I needed.
My body is seemingly collapsing underneath me, and everyday seems to come up with new things.
It is disappointing that the country that we live in is a country of entitlement, they feel that they DESERVE everything without giving UP anything.
Those that went before us, naturally they deserve our love first, then we get our love after.
My TBI and what PTSD that I have are totally manageable, nothing compared to what Vietnam Vets have to deal with. Yet my new Soldiers that I get, are still less quality than what went to Vietnam.
THAT is what we deal with on top of everything that we sacrificed, I lost all of the good ones, now I deal with what's left.
Here's to the next several years, hopefully it will get better.
(5)
Comment
(0)

Capt Seid Waddell
>1 y
SSG Robert Herpel, very few of us that went to Vietnam had as many combat tours as is common for those that serve today.
(1)
Reply
(0)

1SG (Join to see)
>1 y
It is sometimes dirty, thankless work that we do SFC (Join to see). Don't think for a second that what we do is any less hard than it was back in the day. What is worse, really - fighting an inhuman enemy a one that puts on airs during the day and murders at night?
Your pride and your spirit is what gets you through the rough spots.
Respect, from one old Soldier to another.
(2)
Reply
(0)
Show More Comments
Read This Next
RallyPoint Home