FDR came real close to being killed in WWII. You won't believe who the villain was!!! 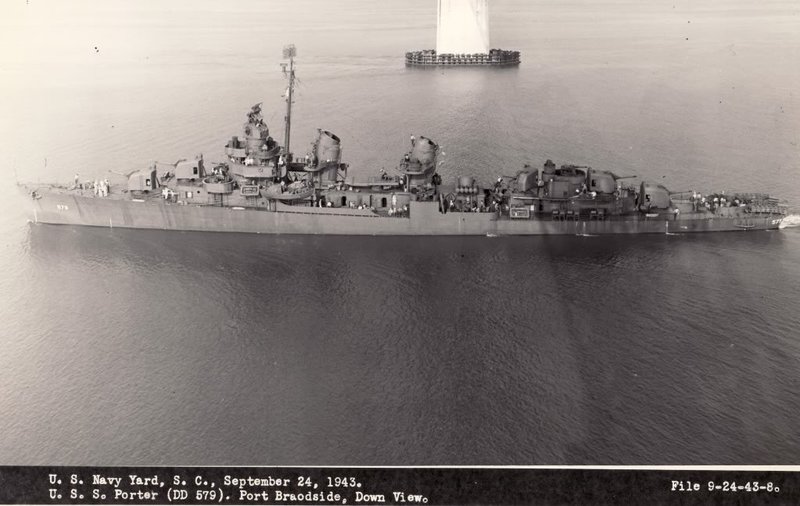 There is truly no way to quantify which might be the worst crew in US Navy history, but the men of the USS William D. Porter, circa 1943, deserve a fair shot at it. Mistakes happen in the chaos of war, and even the best have been known to make them. However, that typically doesn’t involve firing a live torpedo at the President of the United States as he traverses the Atlantic Ocean in the middle of World War II.

It is certain that Hitler likely appreciated the help, but the President and Joint Chiefs on board the USS Iowa did not. Remarkably, this wasn’t the USS William D. Porter’s first mistake on this secretive voyage. So, while we can’t say for certain this is the worst crew in US Naval History, it is a safe bet that no future ship will ever bear the name William D. Porter.

The USS William D. Porter (DD-579) was launched in September of 1942, and commissioned on July 6th, 1943. The crew was comprised of fairly young and inexperienced men as were many ships of the day when a nation had to ramp up a massive Navy to meet the immediate demands of war.

Time for training was short, but the crew was eager to get into the fight. And while it seemed the “Willie Dee” as it would become known was destined for a fairly standard role in the war that spanned the far corners of the ocean, a unique mission to escort the President of the United States would give it a place in naval infamy.

In November of 1943, just months after the Willie Dee was commissioned, President Franklin Delano Roosevelt would embark on a clandestine mission to cross the U-boat infested waters of the Atlantic and meet with Churchill and Stalin in Tehran. And, as one would expect, FDR would warrant quite the naval escort to ensure his safety in transit.

FDR, along with the Secretary of State and the Joint Chiefs, would board the massive battleship, USS Iowa. Two escort carriers would join the voyage along with 3 destroyers, one of which was the Willie D. porter.

In an almost hysterical and ominous sign, as the USS William D. Porter backed out from the docks at Norfolk, she forgot to raise her anchor in its entirety and it snagged the railing of her sister ship as it backed out. Ripping off the railing, life rafts, small boats and other equipment, Captain Wilfred Walter could only apologize briefly to the other ship by bull horn, and then head out for a timely rendezvous with the USS Iowa.

But that wouldn’t be the end of trouble for this ill-fated crew.

The USS William D. Porter made its rendezvous with the task force although they perhaps wished they had not. Radio silence was ordered for most of the trip that would make communication slightly more complicated than usual. So, when the Willie Dee had an improperly secured depth charge fall off the side of the ship in rough seas and explode, it set the USS Iowa and the entire escort fleet into immediate evasive maneuvers as they assumed the fleet was under attack.

The truth eventually became known, and Captain Wilfred Walter was duly admonished, considering the Chief of Naval Operation was traveling with FDR. Promising to improve, Captain Walter took the redirection to heart and continued with his mission.

Meanwhile, when the fleet was just east of Bermuda, it was reported that FDR wanted to get a look at how the ships could defend themselves if they came under attack. Weather balloons were sent aloft, and the USS Iowa fired its defensive weapons while FDR enjoyed the show from the deck.

As a few of the missed weather balloons drifted back towards the Willie Dee, Captain Walter decided to get in on the action. While firing their guns at the drifting balloons, he also simultaneously ordered a drill to practice a torpedo run. And, since the USS Iowa was directly in front him, that made for a suitable target for this dry torpedo run.

Two mock firings went off without a hitch or torpedo in the water. However, with the third torpedo, the crew member below had failed to take out the priming pin that launched the torpedo into the water.

Then, to the horror of officers on the bridge, they heard the unmistakable sound of a torpedo in the water now heading straight for the President of the United States who was still on deck.

With radio silence still ordered and just minutes before the torpedo would reach its target, he ordered the crew to signal the USS Iowa with flashing lights. However, the young crew member could barely get it done and signaled an array of bizarre phrases to the Iowa as he became more flustered watching the torpedo slice through the water.

Captain Walter made the decision to break radio silence and frantically warned the USS Iowa to turn immediately.

The USS Iowa got the message and took a hard turn to avoid impact to such a degree that FDR’s wheelchair had to be stabilized to avoid rolling. The torpedo missed its mark just a few thousand yards into the ship’s wake, and FDR watched it detonate.

The next sight the Willie Dee would observe is the USS Iowa traversing its massive guns towards her position as they attempted to find out what had happened. Captain Walter had explained, and the USS William D. Porter was not so politely asked to leave the convoy and head for Bermuda, as their services were no longer needed.

Once in Bermuda, it is reported, but not confirmed by the ships' logs, that armed Marines met them at the dock to investigate what had happened. The sailor responsible for firing the torpedo was given a punishment of hard labor that was eventually reduced by orders from FDR.

Recognizing it was a mistake of epic proportions, the crew was eventually given another assignment… in Alaska. Appropriately enough, when the USS William D. Porter would come into a harbor or encounter another ship, she was often greeted with the phrase, “Don’t Shoot, I’m Republican!" Willie Dee would continue to serve in some capacity in the Pacific until the morning June 10th, 1945, when a Kamikaze attack barreled down upon her from the sky. Remarkably, the attacking plane missed and then crashed into the ocean.

However, the Willie Dee would somehow find itself positioned right on top of the explosive-laden plane as it exploded under the water. The USS William D. Porter was lifted up and came crashing back down. The now experienced crew tried to save her, but the Willie Dee sank to the ocean bottom near Okinawa.

Miraculously, the crew survived and, so, it would end that the one time worst crews in the history of the US Navy would live to talk about the day they almost assassinated the President of the United States.
Posted in these groups:

SFC (Join to see)
Posted >1 y ago
SCPO (Join to see) thanks for posting this thread, very informative and intriguing. Murphy Law in effect on the voyage.
(6)
Comment
(0)

PO1 Brian Austin
Posted >1 y ago
I'd heard some about it, but never the full story. Truth is stranger than fiction sometimes!
(3)
Comment
(0)
Show More Comments
Read This Next
RallyPoint Home