Officer promotions to dump zone distinctions that held some back

Seriously it will be interesting to see if this has any impact. You could almost draw a line in the lineal list and know who was going to be promoted year by year because of zone distinctions. Sucked having your last name begin with "W". http://www.navytimes.com/story/military/careers/navy/officer/2015/09/12/officer-promotions-dump-zone-distinctions-held-some-back/72125770/


SPARKS, Nevada — Huge changes are coming to officer promotions, and they're coming next year, according to the head of aviation officer assignments.

Promotion zones will be a thing of the past, and for the first time, you'll be able to overcome your date of rank to be more competitive, Capt. Dan Dwyer told an audience packed with junior and senior officers Friday at the annual Tailhook Reunion near Reno, Nevada.

Officers have long lamented the Navy's strict "golden career paths," longing for a more talent-based promotion system that values education and other accomplishments rather sustained performance along a cookie-cutter career track. The most recent outcry came in early September, when some aviators were dismayed to find O-4 selection rates below their peers in the surface and submarine communities.

Navy Secretary Ray Mabus announced earlier this year that the service was looking at doing away with officer year groups altogether, which box personnel into competing with peers who entered the service at the same time, regardless of where their careers have taken them.

Some junior officers will have seniority over others based on the date they were commissioned or from higher class standing at the Naval Academy, rather than accomplishments as an officer, which can influence their promotions for years. Officer promotions aren't competitive until they reach the O-4 board.

That system will still be in play for the next few years, but Dwyer dropped a bombshell: Starting with the fiscal year 2017 selection boards, the top 10 percent of officers selected for O-4 and above, based on their fitness reports, will have their dates of rank reset, so that how they did in college is less of a factor.

"If you’re a front runner in the fleet and you had a mid-pack date of rank, and you have since turned it on and you promote at the top of that promotion rank, then your date of rank will be adjusted and you’ll pin on rank ahead of your peers," he said.

It will be the Navy's first move to a talent-based promotion system, he added.

And there's more. Officers who become eligible for a promotion later than their peers, or who aren't selected their first time before a promotion board, often end up sporting a scarlet A, for "above-zone."

He painted a picture of a Naval Academy alum who gets the opportunity to earn a master's at the Massachusetts Institute of Technology right after graduation. Then he goes to flight school, becomes an E-18G Growler pilot, and after a tour as a fleet replacement squadron student, he does two deployments with a fleet squadron.

"He’s now highly valued in that squadron ... the CO wants to keep him a couple extra months to train the next cadre of JOs, so he gets an extension in the fleet," Dwyer said.

Next he moves onto his first shore tour as an FRS instructor, and within a year, he's up for promotion to O-4. The problem, Dwyer said, is he's now years behind the others in his year group and considered above-zone.

"But obviously he’s a very talented, capable, valued naval aviator and our system could [possibly] not select him for promotion," he said. "So how do we maintain that those types of officers don’t slip through the cracks?"

The answer is getting rid of the above- and in-zone promotion designations, he said, starting next year. Rather than giving a promotion to an above-zone officer at the expense of an in-zone officer, the board will just see one big pot of officers up for promotion.

Not only will that policy change the game for officers with non-standard career paths, it will be particularly valuable for aviators and NFOs, who have an extended training pipeline but still compete with surface warfare, submarine and other unrestricted line officers who report for their first sea tours sooner.

As a result, other communities have seen O-4 promotion rates over 90 percent, for example, while aviators and flight officers are making lieutenant commander at closer to 70 percent.

Removing the zones won't change that dynamic, but it will give above-zone aviators a better shot at a promotion, because it will remove the "negative connotation" that comes with it, Dwyer said.

Another project is a Title 10 legislation change led by Chief of Naval Personnel Vice Adm. Bill Moran, Dwyer said. NPC will ask Congress to allow promotion selectees to defer a promotion board for a year if they feel they aren't competitive enough yet, but think they'll be a better candidate in the next cycle.

That change will be up to lawmakers, but for lieutenants and above eyeing a promotion next year, huge changes are on the way. 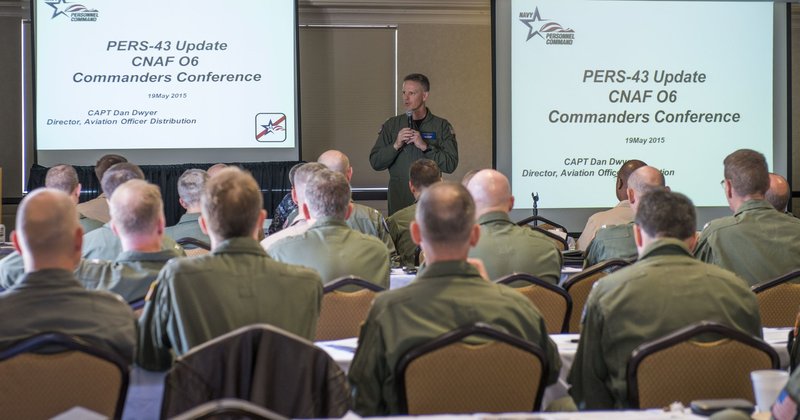 Officer promotions to dump zone distinctions that held some back

LCDR (Join to see)
Posted 5 y ago
Any chance you can post the article? My "free access" has been used up for this time period. Haha. I already read the article but don't remember it exactly.

At first thought this kind of scares me, since I am someone who did all of the "right" things to set my career up around the zones as they are. At the same time though if it means I could be promoted ahead of others to O-5 that aren't really ready and have slacked off, I'd endorse it. I have a feeling this won't truly affect me either way but I can see significant benefits for future crops of officers.
(3)
Comment
(0)
show previous comments

LCDR (Join to see)
5 y
LT (Join to see) it's not at all uncommon not to know, part of my job is career advice and I work a lot with detailers and promotion board members. I wish it was a little better publicized!
(1)
Reply
(0)

LCDR (Join to see)
5 y
LCDR (Join to see) My promotions were always automatic or due to being at the right place at the right time. No matter what they change I don't hold out a lot of faith in any real impact to ensure the best of the best are promoted. Then they will wonder why they have to relive so many COs this year while other good officers left the Navy out of frustration with the system. I don't know a lot about the AMO community but when I decided to go URL and not EMO that directly resulted in my promotion to O-4. LT Julius Wilson was a good friend and better officer then I and he got passed up because the numbers were not there in the EMO field. My year group the Navy offered all the ROTC grads IRRs. So guess what they took it, fast forward 8 years and if you could fog a mirror as an 1110 you were promoted.
(1)
Reply
(0)

CW4 Craig Urban
1 y
As as army cw4 with 26 yrs of service and army funded college under my belt I never was promoted below the zone. That is because my first ballation commander a west point grad.as my senior rater gave me a 98 out of 100
Dennis Benchoff. Retired as a. 3 star. Commanded 101st. I received a 200 from hin. LTC Ronald Hite. Retired as a 3 star. He turned down the 4th star. High speed should be rewarded irregardless of service.
(0)
Reply
(0)

MCPO Roger Collins
5 y
Hold on there! Drunken sailors? Who ever heard of such?
(4)
Reply
(0)

LCDR (Join to see)
5 y
MCPO Roger Collins I mean really, what would you do with a drunken Sailor?
(0)
Reply
(0)

MSG Brad Sand
5 y
MCPO Roger Collins
It was just now that I realized the two word did not always have to be together?

LCDR (Join to see)
A Marine friend was telling me they use them as bait? I think he might have been joking?
(0)
Reply
(0)

SCPO David Lockwood
Posted 5 y ago
If I'm not mistaken they never stopped doing tailhook. They continued with it but policed themselves with with an iron fist!
(1)
Comment
(0)

LCDR (Join to see)
5 y
SCPO David Lockwood Naval Aviators, "Police themselves" "Iron Fist" are we talking about the same brownshoes? But then you knew them better than me Senior. I was just surprised they were still doing the convention. They would hold a SWO convention but it would be on a decommissioned frigate in Newport in the middle of winter and no one would come.
(3)
Reply
(0)

LT (Join to see)
5 y
LCDR (Join to see) As an aviator, I approve this (your) message.
(2)
Reply
(0)
Show More Comments
Read This Next
RallyPoint Home