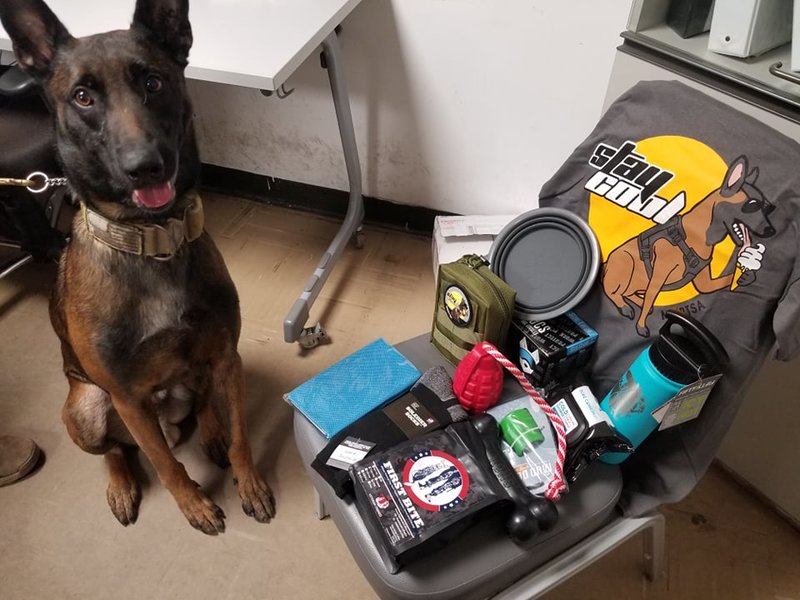 Less than an hour’s drive north of New York City is a historic sculpture of a German Shepherd wearing a Red Cross blanket. The War Dog Memorial, cataloged by the Smithsonian American Art Museum, honors the more than 7,000 military working dogs who died during World War I.

Canines have served the military for centuries. Beyond being loyal and brave, a dog can smell an object or a person 12 miles away. These traits make war dogs ideal for helping modern militaries locate drugs, explosives, mines and enemy combatants.

The U.S. Air Force 341st Training Squadron at Joint Base San Antonio-Lackland, Texas, trains military working dogs (MWDs) and handlers for Department of Defense (DOD) and other government security operations. The Lackland squadron is responsible for about 800 to 900 canines at a time, providing breeding, training and veterinary support. There are an estimated 2,300 canines deployed to military bases, with a larger number of contract working dogs serving alongside DOD-owned MWDs.

Even though these dogs have their own day in March — National K9 Veterans Day — they don’t always get the support they’ve earned. Here are five ways you can help out:

1. Know a military working dog’s life before adopting. Military and contract working dogs may serve for up to a decade, possibly on multiple tours. At the end of their careers, they are battle weary and may even have post-traumatic stress disorder, said Bob Bryant, chief technology officer of Mission K9 Rescue, which serves retiring and retired military, contract and police department canines.

“Retired working dogs are not suited for service animals,” Bryant said. Beyond exercise, he said, retired military working dogs should be “couch potatoes.” As older animals, he added, they typically require up to $1,000 in annual veterinary care, a cost not covered by the military.

He said the ideal adopter is an adult who doesn’t have other pets or children under age 12, who can be home with the dog during the day and who can provide the dog with regular exercise. Mission K9 Rescue is currently caring for 51 retired military working dogs awaiting adoption by individuals or families who meet the requirements, Bryant said.

2. Send a care package. If adoption isn’t an option, you can contribute to quarterly care packages sent to MWD teams now deployed to global combat zones through the Military Working Dog Team Association, a West Virginia-based nonprofit. Each year, the organization sends about 800 packages containing toys, treats and tools for military K9s and snacks, coffee and clothes for handlers, said Nikki Rohrig, the association’s president.

Care package items, which can be donated through a curated Amazon wish list, are chosen based on feedback from MWD teams, she said. One of the most commonly requested items is a $12 showerhead nozzle for a plastic water bottle that handlers use to cool their dogs down. (Purchase care package items or donate in other ways at https://rly.pt/2R0KFn7)

3. Support the journey home. Military or contract working dogs retiring from posts overseas are honored but they don’t receive retirement pay or Veterans’ benefits. DOD typically doesn’t pay the up to $6,000 to deliver dogs to their adopted home. That’s when organizations such as Mission K9 Rescue step in.

“We get the dog home,” Bryant said. Since 2013, Mission K9 Rescue has received 1,000 retired military working dogs, of which 520 were reunited with their original handlers.

MWD Elvis, who served for seven to eight years on Misawa Air Base in Japan and was commended in a June 2020 ceremony broadcast on YouTube, had a particularly difficult time with his adoption. Elvis’s handler, Staff Sgt. Amanda Puryear, said in the video that the difficulties made the circumstances of his retirement “bittersweet.”

“I just wish that with everything that was going on, we could get him to his home in New Mexico without any hassle, but that’s been the battle this whole entire time,” Puryear said. “And I just want to see him on a couch, happy, with his family. But I’m so excited for him to … not have to be working anymore.”

Circumstances were such that Puryear was never able to get Elvis to New Mexico; he instead was adopted by a military family in Japan. Bryant’s team has since met around eight retired working dogs at U.S. airports traveling from overseas to transport them the rest of the way to their adopted families, but Elvis remained in Japan.

4. Share stories of K9 service. You can view Elvis’s retirement ceremony (https://rly.pt/2Pk8uWB) and check out other K9 stories of service and sacrifice at RallyPoint and across social media.

There’s that of Kay, a 16-year-old Belgian Malinois who completed 200 operations in three deployments to Afghanistan and one to Iraq in the 75th Ranger Regiment. Her story was shared in a post by the United States War Dogs Association, a nonprofit that represents current and former U.S. military dog handlers. (Check out Kay’s story: https://rly.pt/3dxNqUF )

There’s also that of contract working dog Mazzie, of Fruit Heights, Utah, who inspired a Vietnam War Dog Memorial, established in 2020 in Layton, Utah. According to a recent Facebook remembrance, Mazzie served five years in Kuwait and retired in 2015. He continued service as a War Dog Ambassador and earned lifetime membership in the Vietnam Veterans of America. (Check out Mazzie’s story: https://rly.pt/3mcKctz .)

If you do go, consider including some thoughts and images on your RallyPoint page using the tags “K9-Military Working Dog” or “K9 Handler.”

Read a December 2020 Air Force-sponsored report prepared for the Naval Postgraduate School finding that there is a shortage of domestically bred dogs qualified for use by DOD and other federal agencies: https://rly.pt/3dra0hE .
Posted in these groups:

LCpl Todd Wilson
Posted 1 mo ago
I had to put down my working dog, Rocky, a American German Shepherd, three years ago. The family and I go visit him a few times a year where he is buried to do Vietnamese Buddhist prayers and burn incense for him. My daughter painted a picture of him and his name on a 6” x 18” plaque with a stake into the ground on each end.
I would like to adopt a retired working dog and have a good reason to go for walks 4-5 times a day to keep my weight down like Rocky did for me for over 11 years. With metal medical implants in my arms and legs, Rocky was the reason why I can walk somewhat normal again. The major issue for me is Hawaii’s Quarantine program, it almost took an arm and leg to bring him here to Honolulu from Fountain Valley, California but luckily I was able to do the instant release at the Honolulu Airport. I will follow some of the links to get on a waiting list if needed. Wish me luck!
(6)
Comment
(0)

SMSgt Bob Wilson
Posted 1 mo ago
The military should provide "free Vet care" to the dogs after their service or a financial supplement to the dog's owner.
(5)
Comment
(0)