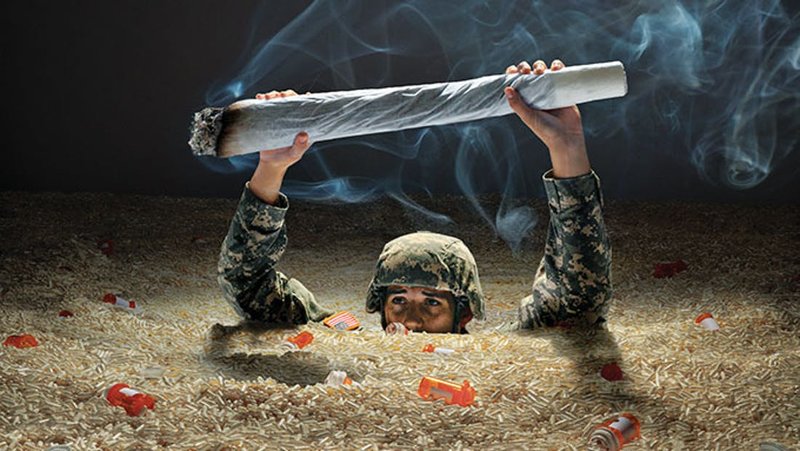 Air Force Veteran Tiffany Kronenburg, of Fleming Island, Florida, accesses all the care and treatment she needs at the Veterans Health Administration, with one exception — she must go to another doctor for medical marijuana.

To obtain the drug that Kronenburg, 31, says successfully relieves symptoms of post-traumatic stress disorder and severe anxiety, she pays nearly $500 to visit a provider outside the U.S. Department of Veterans Affairs (VA) system, $75 for a registry identification card and $300-$400 for the product each month. That’s because it’s legal for approved Sunshine State physicians — and providers in 35 other states — to prescribe medical cannabis but illegal for VA to do so.

“It’s a pretty big budget,” Kronenburg told RallyPoint in an interview. But the former nuclear weapons technician said she feels lucky to be able to afford what she considers a natural alternative to an opioid-based treatment. “I think it’s spot on for my symptoms,” she said.

Bill would open up access to medical cannabis at VA

Kronenburg argued that she and other Veterans should be able to obtain medical marijuana directly from their VA providers, streamlining care and potentially saving money. She is among the growing number of Veterans, Veterans service organizations and advocacy groups who support bills reintroduced in Congress last month that would overturn the VA prescription ban for Veterans living in states with legalized medical marijuana.

The fast pace of change in Veteran attitudes on this issue can be seen in member surveys conducted by Iraq and Afghanistan Veterans of America (IAVA): From 2017 to 2019, IAVA surveys found, support among its 400,000 members for legalizing medical marijuana jumped from 55% to 83%.

Yet right now, because federal law classifies pot as a Schedule I controlled substance, VA providers are barred from recommending or assisting Veterans in obtaining medical marijuana.

A renewed bipartisan effort to change this VA policy, and support research into related issues, took shape in April with the introduction of the Veterans Medical Marijuana Safe Harbor Act in the Senate (S. 1183) and in the House (H.R. 2588).

“In 36 states, doctors and their patients have the option to use medical marijuana to manage pain — unless those doctors work for the VA and their patients are Veterans,” said Sen. Schatz, D-Hawaii, in introducing the legislation April 16. His bill is cosponsored by Sens. Tim Kaine, D-Va.; Jeff Merkley, D-Ore.; Jacky Rosen, D-Nev.; Bernie Sanders, I-Vt.; and Ron Wyden, D-Ore. In the House, Reps. Barbara Lee, D-Calif., and Dave Joyce, R-Ohio, introduced similar legislation, which has 12 cosponsors.

IAVA, AMVETS and Minority Veterans of America are among the Veterans’ groups backing the legislation, which creates a five-year safe harbor protection for Veteran users of medical marijuana and their doctors in recommending medical marijuana where it is legal.

VA’s marijuana policy, which was updated in 2017, encourages Veterans to discuss medical marijuana use with their VA providers. They cannot be denied benefits for using the substance. And the policy makes clear that any medical records documenting use of medical marijuana are for treatment planning purposes and guarded by privacy laws.

The law must go further, proponents argued, by allowing VA doctors to prescribe medical marijuana and protect Veterans from legal and employment consequences if they use the drug.

After all, Joyce said in a statement, if states legalized medical marijuana, “the federal government should not be preventing a VA doctor from recommending medical cannabis if they believe that treatment is right for their patient.”

Veterans would likely save money by having medical marijuana available in one stop through a VA provider, who would be able to register as a prescriber in states where it’s legal, Cherissa Jackson, AMVETS chief medical executive, told RallyPoint. Military discounts honored by dispensaries can bring costs down further, she said.

Kronenburg, the Florida Veteran, agreed that the bill would “cut out the middleman” and let her and other Veterans remain within the VA system of care. She said that “all my VA providers know that I use medical marijuana” and has faced no adverse consequences.

But Jackson said too many Veterans hide their marijuana use from VA health providers, fearing stigma or scrutiny. Passage of the bill, she said, would allow Veterans to open up and work with their VA providers on tailored care plans that include cannabis.

“This is the gateway to make that happen,” she said of the legislation.

Does availability of medical cannabis reduce opioid use?

Another benefit if the bill were to pass, Kronenburg said, is providing Veterans with “access to something other than opioids.”

In fact, the bill directs VA to research whether greater access to cannabis can reduce opioid use, as studies by RAND, the state of Minnesota and others indicate.

A 2018 RAND study published in the Journal of Health Economics found that “broader access to medical marijuana facilitates substitution of marijuana for powerful and addictive opioids.” A 2016 study of 2,290 patients, conducted by the Minnesota Department of Health, found nearly 60% on other pain medications were able to cut their use of those therapies after taking medical cannabis.

Specifically, the bill calls on VA to look at the relationship between state medical marijuana programs and reduced opioid use and abuse among Veterans. It also calls for more research on the effects of medical marijuana on pain.

Prospects for passage remain uncertain. One observer floated the idea that the VA bill could be combined with other cannabis-related legislation moving through Congress, such as the Secure and Fair Enforcement Banking Act (H.R. 1996), which passed the House April 19.

Read VA and marijuana — what Veterans need to know: https://rly.pt/3uqrS3b

Access the Minnesota Department of Public Health study: https://rly.pt/3xL644u
Posted in these groups:

SP5 Frank Hartless
Posted 4 mo ago
It does wonders for diabetic neuropathy.
(4)
Comment
(0)

LTJG Sandra Smith
2 mo
This is NOT a drug anyone should be using, unless confined, so they cannot endanger others!
(0)
Reply
(0)
Show More Comments
Read This Next
RallyPoint Home