New Army Combat Fitness Test is Here to Stay, Despite Call for Study 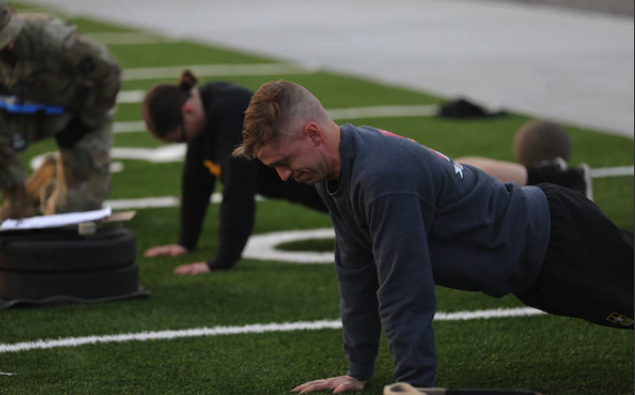 The Army is largely keeping the new Army Combat Fitness Test, according to Sgt. Maj. of the Army Michael A. Grinston, and he urged soldiers in a recent Instagram live event to “take the test.”

Grinston and other Army leaders have addressed questions about the ACFT in various outlets in recent weeks and months. In addition to Grinston hosting the Instagram live event (largely captured by Army Veteran Christopher Chaos on his YouTube channel) and pushing out media through Army channels, leaders have issued statements to military.com, Task and Purpose, and other press. Opinions on the test across traditional and social media vary.

Most agree the test is more difficult and requires more equipment and space to administer (https://rly.pt/3vl0Nj5). However, Deputy Commanding General/Chief of Staff Lt. Gen. Theodore D. Martin said in a video on the Army Training and Doctrine Command website that the physical fitness test developed 40 years ago didn’t fully prepare soldiers for the demands of war. And today’s soldiers must be ready to carry around heavy body armor and ammunition, and engage in combat, regardless of military occupational specialty.

“That requires a tougher, more physically fit, more resilient soldier,” Martin said. “The ACFT will create and deliver that soldier to the battlefield.” Better training can reduce injury and attrition, the Army also says.

Since the ACFT came out, however, Congress and COVID-19 (and possibly criticism) prompted leaders to delay its implementation for a year.

Although the Army wants all soldiers to take the ACFT for data evaluation purposes, it won’t count on soldiers’ records until March 2022.

Elaborating on this point during the Instagram event, Grinston said that a soldier’s last Army Physical Fitness Test is valid until “further notice.” The new ACFT, he said, is the “test of record” during the evaluation period but “none of your scores are going to count for or against you until March 2022.”

Grinston also said during the event that officials are still looking at how the test data is going to be used along the career continuum.

“The requirement to pass will be age and gender neutral,” he said, but the Army is evaluating how to use each score in areas such as promotions and assessments. “We need all soldiers to take the test in order to have the data to make those decisions.”

The following month, the Service Women’s Action Network, a nonpartisan advocacy group for female service members and Veterans, issued a statement calling the Army’s implementation of ACFT “precipitous” and echoed the call for more study. The group urged Congress to require the Army to look at how the test might impact the military careers of women and older soldiers, hurt recruitment and/or retention, cause injury or impact other areas.

A provision to halt implementation of the ACFT until it is further studied passed as part of the Fiscal 2021 National Defense Authorization Act, approved Jan. 1, 2021.

The Army is only required to study two relatively narrow issues: 1) Whether those deployed to areas with certain climates or conditions would have a hard time training outdoors for the test, and 2) whether the test would affect recruitment and retention of critical military specialties such as medical personnel.

Even so, in a sign the ACFT could evolve, Grinston said during the Instagram event that the next iteration of the test will allow soldiers to choose between a leg-tuck or plank event. (Soldiers could receive a maximum score of 400 if they hold the plank for 4-plus minutes.)

Grinston said only about 20% of the Army has taken the ACFT so far. He encouraged soldiers to take it so the Army can gather more testing data and finalize implementation of the fitness test. Don’t expect “major changes to how the test is conducted,” he added.

“Physical fitness is not new to soldiers,” Sgt. First Class Nakelia Ramey noted in a March 2 video posted to the Army’s Twitter feed. “So, the ACFT, it may be a challenge, but we are able to get through it.”

Access the U.S. Army’s main page with resources on the ACFT: http://rly.pt/3cpY1Aj

Read the Oct. 20, 2020, letter sent by Sens. Gillibrand and Blumenthal to the chairmen and ranking members of the Senate and House Armed Services Committees: http://rly.pt/38yL0mS

View the March 1, 2021, YouTube summary of Grinston’s question-and-answer session about the ACFT: https://rly.pt/3vhvW6J

Read TRADOC’s March 4, 2021, article, “The ACFT is designed for combat — TRADOC shows why”: http://rly.pt/3cnaNzD
Posted in these groups:

CPT (Join to see)
Edited 2 mo ago
Posted 2 mo ago
Well, whatever the standard, all things being equal the ACFT will statistically reduce fitness readiness in the Reserves.

If only because of administrative execution limitations.

1) Equipment is issued at the BN level.
2) The test itself now takes an entire day, sometimes two depending on the size of the unit
3) Company level tests have to be coordinated across all the companies under the same BN to share equipment.
3a) Eventually equipment will start to become lost, and testing will be hard to complete per the reg.
4) The ACFT event will become much on par as Weapon Qual weekends. They will be mandatory events with no excused absences, on top of the two annual Mass Medical events already unexcused, on top of AT already unexcused. Soldiers will merely eat the "U" in order to attend a critical civilian event like finishing a college degree verses an ACFT.
5) Soldiers flagged will not have the ability to remove the flag until the next large coordinated BN level ACFT record event.
5a) School attendance will go down as a result of increased flags and duration of flags.
5b) Promotions will slow as well as a result of extended flags
5c) Current Record ACFT scores will also roll off as a result of administrative timing between record events and simply not being able to attend reduced record event frequency.

At the highest level of the USAR the choice then becomes maintaining a strategic national level reserve capability or letting it administratively dwindle.

If the ACFT is not changed it will simply have to have many administrative exceptions.
Examples:
1) Current record now lasts 24 months not 12.
2) School don't require a current passing record, or only require it for high skill more expense schools.
3) Promotions might not require current passing record at E5-6 level or O1-O3

************
All things being equal, and the fitness level of the USAR soldier being the same in that the soldier that could pass the APFT today assumed could pass the ACFT tomorrow the reported passing metrics on the spreadsheet to the generals is going to be lower.
(10)
Comment
(0)

SFC Melvin Brandenburg
Posted 2 mo ago
One uniform standard seems fair, except do we use the women's standard, the old dude standard, or make everyone meet the stud. I mean, if the army wanted to save money on retirement pensions, this is a good way to do it.
(10)
Comment
(0)
show previous comments

SGT (Join to see)
1 mo
100% correct. Save money on pensions. The new Blended Retirement System (BRS), according to a Rand analysis, stated not enough midcareer Soldiers (10-14 years in) opted into the the new system to save the required dollars on pension. There has been a push for recruitment (New Soldiers are less expensive and forced into BRS) and a non transparent push to get senior people out (Save the grandfathered pension dollars). There has also been a push to limit permanent profiles, forcing Soldiers to be Medically chaptered instead of staying in longer and making the magical 20 year mark.

While all that was happening, SMA Dailey gave us the green light to wear black socks with the new Army PT uniform, which was seen by most as the most important topic of Town Hall discussions. I'll give you black socks but you will have to swallow all of the ACFT in return. Thank you SMA Dailey.
(3)
Reply
(0)

SPC Sherwood D.
1 mo
Just to give a junior enlisted aspect, in basic I took the APFT. This ACFT rolls around and I know it's MOS dependent but to me it's a joke. I'm 25 series so my standard is probably about as low as you can go and I hate it. The Army talks about resilience and readiness, well that starts at raising the standard/expectation. Not slapping together a new test that by and large is far easier to pass than the APFT was.
(1)
Reply
(0)

SFC Melvin Brandenburg
17 d
SFC (Join to see) So be it. I've always believed if a soldier of either gender can't keep up they shouldn't be there. I lived this and when injuries got to where I couldn't keep up I requested retirement and got out.
(0)
Reply
(0)

SFC (Join to see)
17 d
SFC Melvin Brandenburg - I agree, If you meet the standard for a certain job, have at it. All I am saying is this test was designed to keep women out of Combat Arms. There was no reason to replace the APFT for a Basic Fitness standard, The ACFT should be a standard pass/fail.
(0)
Reply
(0)