On Juneteenth, recognizing freedoms won on the battlefield 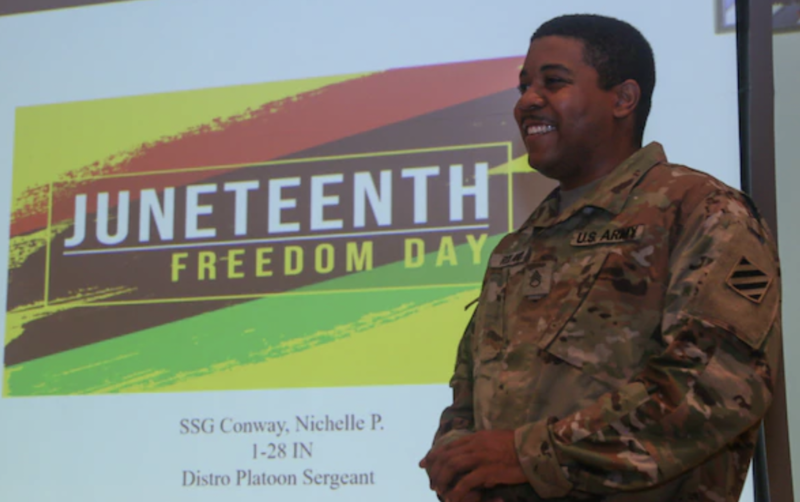 “Freedom, protection, pay, and a call to military duty!” blared the headline of a Civil War poster aimed at recruiting African American men into the U.S. military with the promise of equal pay and equal protection if taken as prisoner of war.

Eager and often prepared to serve, nearly 200,000 Black men eventually fought for the Union and to end slavery (unofficially, many Black women fought too). Yet, as the late historian and Civil War expert Hari Jones noted in a 2018 TED Talk, for years this service was “one of the best kept secrets of American history.”

President Abraham Lincoln’s recruiting poster aside, the ability of Black men to enlist was hardly assured in days following Union troops’ surrender of Fort Sumter to Confederate forces in April 1861, which marked the start of the war.

As hostilities erupted that South Carolina spring, Black men were unable to enlist in the Army or Navy due to a 1792 law signed by President George Washington restricting service to “able-bodied white males.”

Even after Lincoln’s final Emancipation Proclamation took effect on Jan. 1, 1863, and Black men began enlisting in greater numbers in the U.S. military, freedom would remain out of reach for so many during the war.

This, Jones told National Public Radio in June 2008, is how we should understand Juneteenth, the now-official holiday on June 19. Even two years after Lincoln’s proclamation, as Union forces began to end the rebellion, 250,000 Black people in Texas remained in bondage. They are not freed until 2,000 Union troops converge on Galveston — thousands of Black soldiers and sailors were already in the state — to expel the holdout Confederate governor and rebels, enforce emancipation and bring Texas back into the Union. The enslaved people of Texas were informed of their freedom when U.S. Maj. Gen. Gordon Granger issued General Order No. 3 on June 19, 1865.

Freedom from slavery had to be won on the battlefield, Jones argued. The United States, he said, must recognize the contributions of African Americans in all the victories leading to Gen. Robert E. Lee’s surrender on April 9, 1965, at Appomattox, Virginia, and in securing the victory in the period that followed.

Until his death on June 22, 2018, Jones, a U.S. Marine Corps Veteran, spent his career as a writer, lecturer and historian and as assistant director of the African-American Civil War Museum in Washington, D.C., unearthing what he said are the lost stories of African American service in the Civil War period.

In the years — even decades — leading up to Juneteenth, also known as Jubilee Day and Freedom Day, Jones noted that the Black abolitionist community was preparing for war in defense of the U.S. Constitution. Led by abolitionist Frederick Douglass and many others, in 1848, the National Convention of the American Society of Free Persons of Color called for more training and preparations in military tactics and arms.

Jones said in his TED talk that over the next 10 years, thousands of African American men would receive military training — in the Northern states from private militias and in the western part of Canada from the British militia. Some Black men in the South were trained covertly.

“African Americans are forecasting a civil war,” Jones said, “and they have prepared — they have trained for it.”

Despite these preparations, when war breaks out, the 1792 law prevents Black men from enlisting. According to Jones, a group instead poured its training into forming a covert intelligence network known, depending on the location, as the Loyal League, the Legal League or Lincoln’s Legal Loyal League (the “4Ls”).

“This secret African American organization would become the single most important source of tactical and strategic intelligence during the Civil War,” Jones said. The network produced top Union spies such as Abraham Galloway of North Carolina and Harriet Tubman of Maryland, he said, and skilled professionals adept at recruiting talented men from among enslaved populations who would serve with distinction in the Union military.

As noted in the National Archives article, “The Fight for Equal Rights: A Recruiting Poster for Black Soldiers in the Civil War,” by the middle of 1862, it was clear the 1792 law had to go: “The escalating number of former slaves (contrabands), the declining number of white volunteers, and the increasingly pressing personnel needs of the Union Army pushed the Government into reconsidering the ban.”

As the Union Army racked up humiliating defeat after defeat, Congress finally passed the Militia Act of 1862, which Lincoln signed on July 17, 1862. It granted the commander in chief the ability to employ persons of African descent in any military capacity for which he saw fit.

Black men joined in earnest the following month and enlisted in droves the following year, once the final emancipation order took effect.

The vast majority of Black men who served in the Civil War were from Southern states, especially Louisiana, Kentucky, Tennessee and Mississippi. Black men made up 10% of the Union Army and a full 25% of the Union Navy, a service branch that was integrated during the Civil War. They performed in combat and noncombat roles, and nearly 40,000 died, according to the archives. Black women served on their own accord as nurses, scouts and spies.

In the interview with NPR, Jones pointed out that the federal troops that captured Richmond, Virginia, on April 3, 1865, were regiments of Black soldiers in the 25th Army Corps. He said it is an “an indisputably historical fact that American soldiers of African descent captured and occupied the capital of the Confederacy.” A total of 25 Black men received Medals of Honor for their service during the Civil War.

Listen to NPR’s “The Truth About Juneteenth”: https://rly.pt/2SMZGdh

Read “Black Soldiers in the U.S. Military During the Civil War” on the National Archives website: https://www.archives.gov/education/lessons/blacks-civil-war.
Posted in these groups: 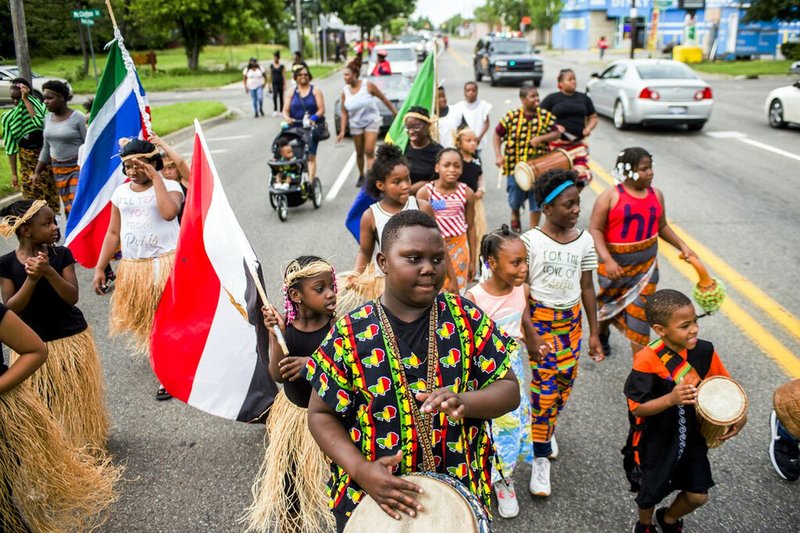 I will be the first to tell you that it is refreshing to me to see these types of posts. Posts that are educational, well written, and speak to a painful and unjust time in our countries history. I encourage you all on RP who are not familiar with this history and background to read through these articles that are included in the write-up. Many of you may not yet be familiar on what all this means or why this is of real significant to many of us in the Black Community.

June 19th has been declared a federal holiday which officially marked the end of slavery. The reason people are celebrating is NOT the act of slavery, slavery ain’t nothing to celebrate. It is because the government is finally acknowledging it with a federal holiday. Guess what? You’re looking at one of them celebrating as well. Me.

SMSgt Lawrence McCarter
3 mo
Freedom to which all are entitled only became a factual when people stood up and fought for that Freedom. Those that best know the value of Freedom are those that have lost it. We must remember History and its pitfalls be willing to fight and make sure that loss of Freedom never happens again ever !
(1)
Reply
(0)

SFC (Join to see)
Edited 3 mo ago
Posted 3 mo ago
Weirdly enough, slavery wasn't actually abolished in the US until February 7, 2013. That's how long it took Mississippi to decide to stop hedging their bets on the slavery issue (not really, it was a clerical issue... or was it? Knowing Mississippi it could go either way).

SGT (Join to see)
3 mo
Slavery was abolished in 1865. After 3/4 of the states ratified the 13th amendment, the ratification by the remaining states was purely symbolic, either a day, a month, or 148 years later.