Ranger School: A Reflection on Toughness 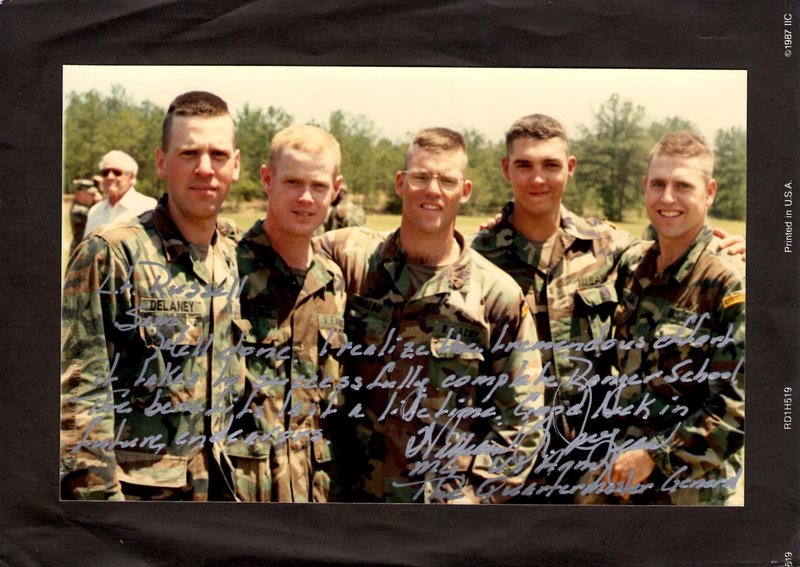 I was fortunate, lucky really, to have made it through without recycling--I received go's on all my patrols, and I attribute that more to luck and some damn good squad members than anything I did. As anyone who has traversed the woods of Benning, mountains of Dahlonega, swamps of Eglin--and in my time the deserts of Dugway--knows, any ranger instructor (RI) can fail any student on any patrol over any number of lapses. I had a couple of the toughest gut checks of my life at the school, and coming out of the then all-male VMI I had already had a few.

There was the 12-mile ruck march during the Darby phase at Benning where my piss was orange before we started (not a good sign). The "bat boy" next to me predicted I'd drop before the end of the march. My feet swelled to the point that I couldn't take off my boots and didn't want to because getting them back on would be impossible. In fact, I didn't want to stop at mandatory rest halts because my body went numb while moving, but was wracked with pain at halts. The heat cramps began at about mile 8, and I remember saying over and over again in my head--and by the end, out loud--"never say die" to the point that I likely resembled a walking zombie more than a disciplined soldier. I finished only because I was determined to literally drop from heat exhaustion before quitting. Fortunately, 12 miles ended before I did. My peers, who almost ended my journey at the end of that phase (I was second to the bottom in our first peer evals) took a rare moment of pity on me and pulled my tasks for the next two hours while I drank every drop of water I could fit in my gut and lay on my back with quivering heat cramps. At least that's how I recall it 26-years later.

The second and greatest gut check came in the East Bay Swamp. It was my turn to "hump the pig," that is to carry the squad's M60 machine gun. After traversing down the Yellow River in zodiacs, we disembarked, and I took possession of our unit's greatest casualty producing weapon. If memory serves, it weighed about 25 pounds including the ammo I carried in my ruck, which was probably around 65 pounds itself. Most of the ammo and the tripod was carried by my ranger buddy who served as the assistant gunner. If you've carried an M60 you know there is no easy way to distribute its weight for a long duration. That night in the East Bay Swamp probably didn't last more than eleven hours, but it seemed unending to me. I recall the Ranger Training Battalion commander accompanied our platoon that night. Every ranger school class is different depending on the time of year and weather. In our case, it was late April, and unseasonably dry. It didn't rain a drop during the two weeks we were in the swamp. The result was the swamp, which is normally about waist to armpit deep with water, was drained leaving a bed of mud and muck. Every step saw my feet sink about a foot and required precious energy to extract from the mire. The "pig" seemed to catch on every vine and branch in the swamp, requiring me to yank it free. Within a few hours my noise discipline was non-existent as I swore with every step I took. By 0200 or 0300 I had come to the conclusion that I was done, mentally if not physically. Quitting was the only logical choice to end my misery. I kept going for two reasons. I knew there was no way to get a helicopter or boat to our location, and even if I quit then and there, I would still have to hump out of that swamp. And, if I quit, that meant someone else would have to hump that pig, and most of them already had a turn at it.

By the time we got back to Benning at the end of the Florida phase and were awaiting our airborne trip out to Dugway, Utah, for the desert phase, I was pretty sure I had received a "go" in all of my patrols (you didn't see your results until the end of the course). I recall one of the RI company commanders asking me publicly if I knew that the Quartermaster Corps was undefeated. I didn't know what he was talking about then, but realized later that he was indicating I had passed all my patrols. I was one of only about five in the platoon that had no negative major or minor spot reports and had passed all patrols. So, I was picked to be the squad leader for our airborne assault into the desert.

As I recall, our mission after a successful airborne insertion was to conduct an assault on some fighting positions around the airfield. It was our second jump at ranger school, as our jump in the swamps was scratched. I had attended Airborne school as a cadet almost four years earlier, so my experience was nil, and the only airborne refresher I received at ranger school was practicing parachute landing falls (PLF) off a trash can. My jump into Dahlonega out of a Blackhawk was an inglorious tree-landing where I was wedged about 100 feet up in a hardwood oak--emphasis on the HARD. Trees weren't an obstacle in the deserts of Dugway. After a four hour stomach churning flight where my not-for-preflight-or-inflight-use-MRE ensured I was as nauseous as a greenhorn sailor, the doors of the C141 opened, and that air beckoned a quick leap into the slip stream. It was my worst exit. I staggered to the door, handed off my static line to the safety, turned about 15 degrees and walked into the side of the door, which spun me out of the aircraft. I entered the blast spinning like a top twisting my risers and suspension lines as my chute deployed. I felt the shock of my chute opening and tried to check my canopy. The twists in my chute kept my head down, and I fell back on my pre-jump training. Grasping the risers I pulled them apart and began bicycling furiously. It seemed like a couple of minutes--but likely was less than 60 seconds--before I felt the final twist pop out and I began spinning the other direction twisting my suspension lines the other way. Finally all the twists came out and I then checked for fellow jumpers to see my rate of descent. No one was around me. Apparently my twisted lines had decreased the size of the opening in my chute and caused me to descend faster than anyone else. I looked for the ground and realized I was almost on it. I released my ALICE pack, which smashed into the ground before it reached the end of my lowering line. I had no time to release my weapon, and I came down on top of my ruck sack with my weapon still attached--a perfect three point PLF: feet, ass, head. On the ground and uninjured, it was a successful jump.

For the first time during our training at ranger school we dawned MILES gear for the assault on the fighting positions. My squad leader duties weren't over until we had secured our objective. The assault required about a 1,500 meter bound to the enemy positions. We started taking fire but continued to move in an upright position. My RI started killing off squad members with his "god" gun if they weren't bounding properly. Before long, I was taken out. Only three of our members were bounding to the RI's satisfaction, and they made it to the enemy position and quickly dispatched them. As I had been "killed" early in the assault, I was sure I had my first no-go, but since my squad mates successfully completed the mission, I passed the patrol. No one makes it through ranger school on their own.

To quote country music legend Kris Kristofferson, "Nothing was harder than Ranger school! In my life! Ever! We’d average about two and a half hours of sleep a night in the mountains and the swamps. It’s all been a walk in the park since then!"

The gut-check that I never had to face at ranger school, was deciding to carry on after being recycled. I completed the then 4-phase course in 60 days, and had the utmost respect for those rangers that repeated a phase or two. Griest and Haver, the first women to graduate, repeated the whole course, essentially going through ranger school twice. Tougher than I had it.
Posted in these groups:

MSG (Join to see)
Posted >1 y ago
I recycled mountains during Best Ranger! I however think I had one of the last easy courses. We could dip and smoke back then!
(4)
Comment
(0)

COL Sam Russell
>1 y
We also could smoke and dip. Didn't realize that was no longer authorized. I recall smoking Marlboro 100s and cutting off the filters to maximize the nicotine.
(1)
Reply
(0)

MSG (Join to see)
>1 y
COL Sam Russell - The tobacco band started in the early 2000's. Ranger students are only allowed 10 packs of gum now. I remember hearing guys dumping out Red Man pouches and filling it with Copenhagen back in the day!
(1)
Reply
(0)

SFC (Join to see)
Posted 5 y ago
Your Florida phase experience sounds just like mine, except instead of humping the pig I was the AB and the AG. Our platoon was down to about 27 people and we only had enough guys for 2 man gun teams. I had the old school, ridiculously heavy tripod and pintle, plus probably 800 rounds of 7.62. It was unbearable. I was stuck in a swamp a little lower than waist high. I think it was Gumdrop. We would take two steps and stand there for 10 minutes. It literally took hours to make it through. I wanted to quit. I even cried a little crocodile tear. But, I realized no one was going to fly a jungle penetrator down to pull me out. If I refused to carry my ruck my squad would have to carry it. So, I shut up and carried on to the other side of the swamp where there was just no point in quitting.
For the girls, they didn't repeat the whole school, they did Darby twice then had a Day 1 insert. But, I commend anyone with the fortitude to redo RAP week after two phases of Ranger School.
(4)
Comment
(0)

MAJ Ken Landgren
Posted 5 y ago
That is a tremendous story, and thank you for your thoughts. Pat Tillman once wrote he faced fears of not graduating from the Ranger Course.
(3)
Comment
(0)
Show More Comments
Read This Next
RallyPoint Home