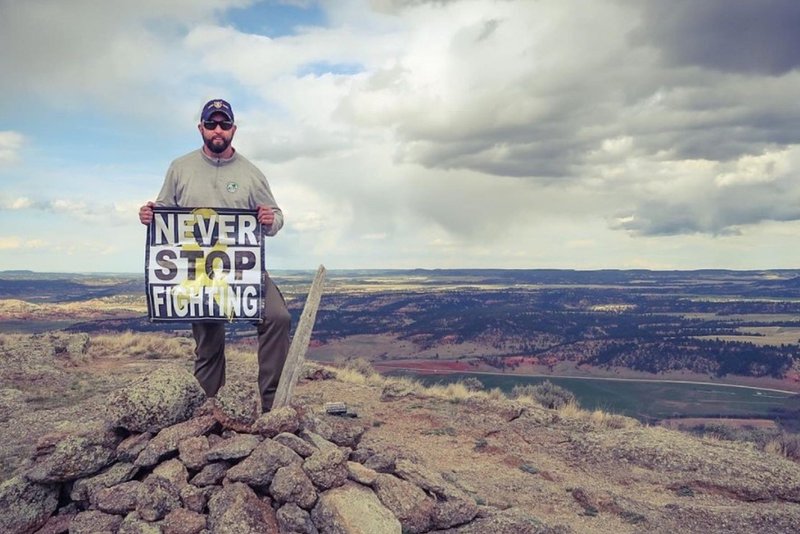 I wasn't afraid to die in the heaviest combat in the war but I still felt the transition was tough - everyone who's struggling thinks they're the only ones struggling because no one wants to talk about it. Especially during the pandemic, I noticed a big increase in mental health challenges. This is one of the main reasons I started my Road Trip across America.

Every vet I knew was in crisis during the pandemic. Vets who have never had mental health struggles before, suddenly were in danger because they had too much time on their hands . Veteran suicides during Covid up 30%, and the military suicide rate is already 50% higher than the national l average. The gravity of reality really hit me when one of my best friends called me in a crisis. It was not even a cry for help, it was more of a goodbye. He basically said “hey it's been real, I appreciate you” etc. etc, and it was shocking for me because I never saw that one coming. Thankfully, I was able to get him help and he's doing great now but I think this shows that so many guys right under our noses are suffering in silence.

After this experience, I felt it was my time to give these guys a motivational kick in the ass and convince them there's still a whole bunch of stuff they want to do in their life. Showing them how much life there’s left to live, especially for those who didn’t make it home, really resonates with a lot of veterans I’ve found. I wanted to remind all those who were struggling how great our country is and why we fought for it in the first place. Most importantly, I wanted to show my struggling peers that you can truly do anything, but you have to be alive to do so. For example, I climbed one of the most technical climbs in the world, even though I’d never rock-climbed a day in my life. I needed to prove by example that even when you think something is impossible, sometimes just getting out of bed, you can do it. So that’s what I did, I picked something impossible to do and I did it.

Failure isn't an option sometimes, and that includes giving up on your life. Don’t fail yourself. As hard as it may seem and even be in the moment, you just have to keep waking up. And you don’t have to do it alone, not only is it okay to get help, it’s brave and it’s one of the greatest things I've ever done for myself. Don’t let ego and preconceptions get in the way of living your life and start walking down the road in a positive direction.

The most important thing is to drop the guards and have real conversations about what you’re going through. We’re all going through the same stuff at the end of the day and we need to step up and own it. American hero lives depend on it. You need to know the struggle is real, but no one can get through it more than those who have been in it. Never Stop Fighting
Posted in these groups:

Lt Col Charlie Brown
Posted 18 d ago
Thank you for what you are doing to highlight this. What you observed is correct, imo. Those who were still busy did better but most of us struggled and thought we were the only ones....
Not so.
(8)
Comment
(0)

SGT David A. 'Cowboy' Groth
Posted 18 d ago
Thank you brother SGT Kurt Power for the great life share here, I know of far too many that decided to follow their battle buddies to Vallhalla.
(5)
Comment
(0)

PO1 James Akins
Posted 9 d ago
I'm glad you took on the mission to provide motivational kick in the ass to talk about suicide. This is a very personal issue with me and if it wasn't for the "VA" and my primary care provider wouldn't had the courage to seek help. She asked me how I was feeling mentally, I informed her that I had an a feeling of being lost and hopeless and an underlying anger that just wouldn't go away and didn't know what was causing it. We talked about it, and finally we set up an appointment for me to see some one. Well the pandemic just started, there were no face visits only phone or zoom call options. I prefer face to face, tried the phone call to discuss my situation but didn't feel right about it then tried zoom call that didn't work so we drifted apart. I later sought consul with the "VA" again and this time I was put on a low dose anti-depressant which should've helped me and I then dealt with my anxiety issues by just diving into my work, worked many a long day, came home completed what needed to be done and how they say it rinse and repeat. I for a time due to the distractions of work and home life and anti-depressant for my anxiety issues was able to maintain but subconsciously they got worse.
I kept a daily journal of what I did and thought and I got to the point where I stopped writing in it because it was to hard to read my written thoughts. I got to the point where I was sleeping only four hours a day and would wakeup after two hours for a short time and then go back to sleep. I got to the point where I lost faith in my life, felt there was no purpose, that I didn't matter, all I was doing was providing someone else's amusement in my disparity. I even had a plan, being diabetic, using a fast acting insulin as part of my daily diabetes manage and knowing using to much at one time could literally kill you, I thought about what it would take to do it.
I finally sought out consul from the "VA", got reconnected to a real good social worker, real good pharmacist which put me on a different anti-depressant and was able to start rebuilding my mental life. My "VA" social worker helped me get to root of my anxiety and how to deal with it and the new anti-depressant I'm on makes me feel better.
I cleared my mind of the old thoughts, burned my personal journal, quit my highly stressful and personally unfulfilling job and cleared my plate. What I learned from this was I have worked non stop, took care of everyone else but me and my body and mind let me know, but I ignored the signs and put on a mask to fit in.
I know this is a kind of long story but I can attest to other military and civilian people that was and is afflicted by some sort of mental illness, its real and there it affects everyone. I saw all the suicide posted signs and ads and there was a few times I even had the "VA" suicide hotline number typed into my phone but didn't call them because that would admit to me that I was weak and defeated. I learned after all this a person needs to talk to someone or if you keep burying your thoughts they will become actions and the results are not what you expect.
I really want to thank the "VA" health care system because my quality of life has gotten better and they were there when I needed them.
(0)
Comment
(0)
Show More Comments
Read This Next
RallyPoint Home