What are the most significant risk factors associated with suicide in the military? 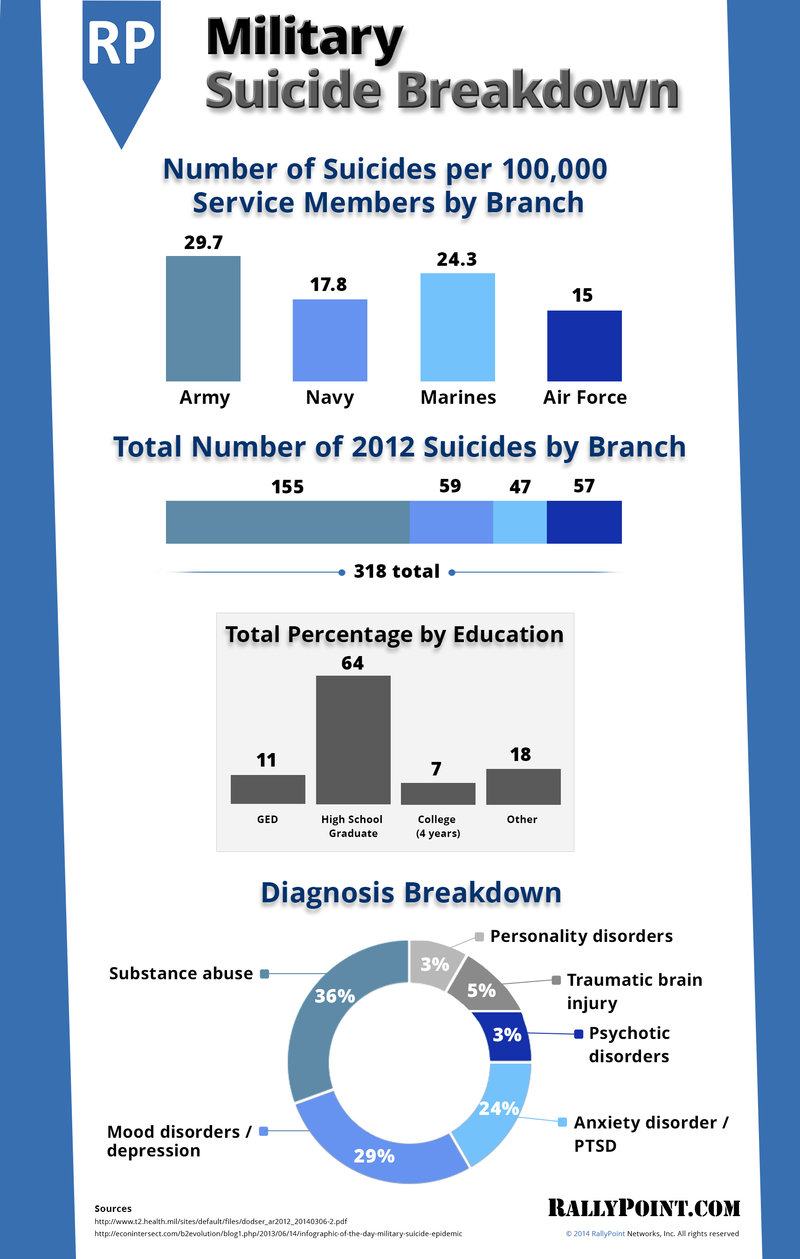 Does the military do enough to address mental and psychological concerns surrounding experiences prior to military service?

Do stigmas attached to being the victim of abuse prevent these service members and Veterans with increased risk to seek the help they need?

Are there other risk factors that we tend to ignore?

http://rly.pt/1n9XHn9
Posted in these groups:

i have one friend that dealt with PTSD. He won. even after a hard fight, he is still alive and helping veterans combat the demons that haunt them after war. thank you Chris Bemiss. For the things you do day to day.
(7)
Comment
(0)

CMSgt James Nolan
Posted 6 y ago
You can watch all of the "informational videos" that you can stand....
The reality is that if you see a significant change in the people around you, and the hairs on the back of your neck stand up-your senses are telling you something. Check on your partners...
People all have their own reasons for doing what they do, but..if they see that you really are concerned, that may just be the push that causes them to turn the corner and come back.

There is huge stigma for "soldiers" (that means all of us) about taking help and "talking" about our problems...we all have them.

SSG(P) (Join to see)
6 y
I certainly think the current op tempo, the theater of operations, the likeliness of seeing combat if deployed, the duration of deployments, and frequency of deployments all play a integral role in the demise of the homestead. I would wager a bet, divorce is at an all time high with deployed soldiers, especially with newer soldiers. I think PTSD is furthermore degrading relationships, both professionally and intimately. I think it will get worse before it gets better. I see the US Army having a high number of suicides due to the sheer size and number of soldiers in the ARMY, and I also see the Marines coming in a close second due to all the reasons previously mentioned.  If you have selected a combat arms MOS, I think your chances of being suicidal increase greatly....compared to all the other MOS'.  Any thoughts, alibis, or arguments on this are strongly encouraged. As a chiropractic physician, I treat many veterans Pro Bono, and if I suspect PTSD, I encourage them to get in for group counseling.  This accomplishes several things, but puts into perspective that they are not going through this alone...and talking about "STUFF" is very cathartic (healing). It also eases the transition of going from a high stress environment to the often sluggish tempo of being a civilian. It is why so many immediately re-enlist after enduring the boring world of 1st Civ Div.
(1)
Reply
(0)