Trump: 'We Are Going to Have the Space Force'

MSgt Ken "Airsoldier" Collins-Hardy
3.02K
114
34
14
14
0
QUOTE: "We are going to have the Air Force, and we are going to have the Space Force. Separate but equal. It is going to be something," Trump said. "I'm hereby directing the department of Defense and the Pentagon to immediately begin the process necessary to establish a Space Force as the sixth branch of the armed forces. That's a big statement." 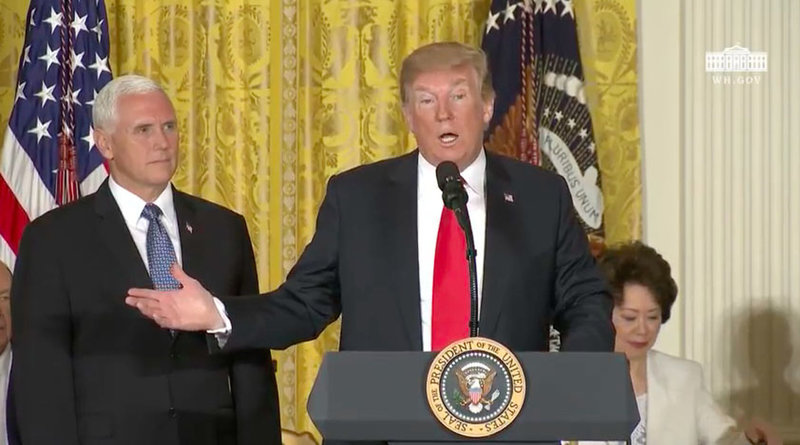 Trump: 'We Are Going to Have the Space Force'

Posted from space.com
Posted in these groups:

LTC Stephen F.
Edited >1 y ago
Posted >1 y ago
Thanks my friend MSgt Ken "Airsoldier" Collins-Hardy for posting another discussion of the establishment of the Space Force
The concept of a separate space force has been bandied about for over a decade. The USAF, the US Army and the US Navy primarily have their hands in space from weapons, through man-launched satellites, though counter missile technology, etc.
NASA has the peaceful role of space exploration.
Since the POTUS has the federal agencies within the Executive Branch it makes sense for the President to announce a separate military service for the Space Force.
Based on my extensive understanding of the formation of the JCS and USAF after WWII it makes great sense to separate the Space Force from the other Military Services and combine offensive and defensive space capabilities in one service.

It makes perfect sense for DoD to be designated to begin the process of establishment of Space Force.

The Air Force was created when the War Department [Army] and the Department of the Navy haggled out the arrangement - that is why the Navy has two air forces [including USMC].

The DoD was established as an executive department of the Government by the National Security Act Amendments of 1949 with the Secretary of Defense as its head (5 U.S.C. 101).


OSD is best positioned to determine which parts of USAF, US Army and US Navy would be transferred to Space Force and budget reductions form those services would follow accordingly in the DoD budget proposal for outyears.

The US Constitution authorizes Congress to create Armies and Navies which made sense in the 18th century.
Creation of the USAF from the Army Air Corps while leaving the US Navy and Marines Air forces separate indicates that establishing of an air force was not an issue with clear constitutional viewpoints that could trump contrary views.

Congress particularly the U.S. House of Represnetives has authority based on the Constitution to initiate authorization and appropriation bills for the Federal agencies including the DoD and Military Services.
I would expect Air Force Space Command (AFSPC) would be the HQ structure used to create the Space Force with one 4 star billet and a couple 3 star billets moved from USAF to Space Force.
I would expect Army and Navy strategic assets and capabilities would be moved to Space Force as well.
The initial budget for Space Force would require some unique funds but Congress would also be able to realign the budgets of Army, Navy and Air Force as assets and force structure [Army term] were transferred to Space Force military service.

Article 1, Section 8 of the Constitution provides Congress authority to raise and support Armies and to provide and maintain a Navy.
"The Congress shall have Power To lay and collect Taxes, Duties, Imposts and Excises, to pay the Debts and provide for the common Defense and general Welfare of the United States; but all Duties, Imposts and Excises shall be uniform throughout the United States;
To borrow money on the credit of the United States;
To regulate Commerce with foreign Nations, and among the several States, and with the Indian Tribes;
To establish an uniform Rule of Naturalization, and uniform Laws on the subject of Bankruptcies throughout the United States;
To coin Money, regulate the Value thereof, and of foreign Coin, and fix the Standard of Weights and Measures;
To provide for the Punishment of counterfeiting the Securities and current Coin of the United States;
To establish Post Offices and Post Roads;
To promote the Progress of Science and useful Arts, by securing for limited Times to Authors and Inventors the exclusive Right to their respective Writings and Discoveries;
To constitute Tribunals inferior to the supreme Court;
To define and punish Piracies and Felonies committed on the high Seas, and Offenses against the Law of Nations;
To declare War, grant Letters of Marque and Reprisal, and make Rules concerning Captures on Land and Water;
To raise and support Armies, but no Appropriation of Money to that Use shall be for a longer Term than two Years;
To provide and maintain a Navy;
To make Rules for the Government and Regulation of the land and naval Forces;
To provide for calling forth the Militia to execute the Laws of the Union, suppress Insurrections and repel Invasions;
To provide for organizing, arming, and disciplining, the Militia, and for governing such Part of them as may be employed in the Service of the United States, reserving to the States respectively, the Appointment of the Officers, and the Authority of training the Militia according to the discipline prescribed by Congress;
To exercise exclusive Legislation in all Cases whatsoever, over such District (not exceeding ten Miles square) as may, by Cession of particular States, and the acceptance of Congress, become the Seat of the Government of the United States, and to exercise like Authority over all Places purchased by the Consent of the Legislature of the State in which the Same shall be, for the Erection of Forts, Magazines, Arsenals, dock-Yards, and other needful Buildings; "
https://www.usconstitution.net/xconst_A1Sec8.html

SP5 Mark Kuzinski
Posted >1 y ago
I like it and let's see how this goes.

MCPO Roger Collins
Posted >1 y ago
No doubt this will happen some time in the future, but we are restoring our military after years of deterioration. That will take a long time and the National Debt continues to grow. Research and planning yes, a new department of space? Doubtful.
(7)
Comment
(0)

Lt Col John (Jack) Christensen
>1 y
Exactly, not the time to be forcing services to divide budget by 6 when they can barely survive when dividing by 5.
(0)
Reply
(0)
Show More Comments
Read This Next
RallyPoint Home