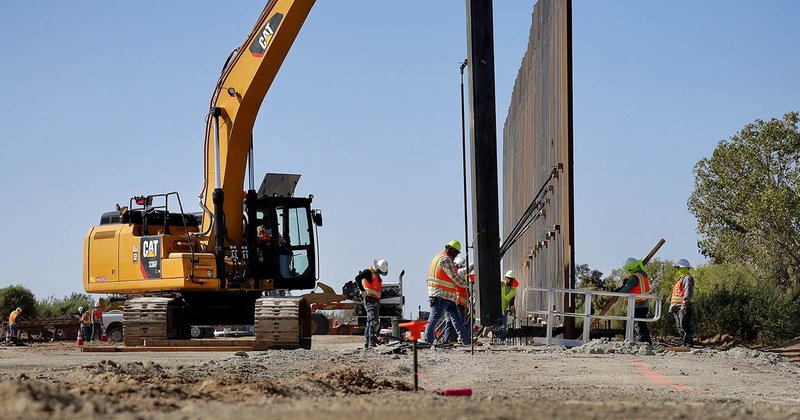 Posted from google.com
Posted in these groups:

MSgt (Join to see)
Posted 1 y ago
Legally they can use what is needed and they pay fair market value for the land. If the own still refuses they can take it. That is the law. It is done all the time in cities and states for roads as an example. It has happened before and it will happen again. And most importantly, it is NOT a Trump thing. Just bias news wanting to stir crap up.
(5)
Comment
(0)

MSgt (Join to see)
1 y
SSG Matthew Adkins - It is news. However, NBC and MSNBC are bias, they favor liberal causes. They make it seem like President Trump is the big bad wolf who is stealing peoples land and he is the only one who has done it, which is false.
(0)
Reply
(0)

PO1 John Johnson
1 y
True that (as opposed to "real market value" (RMV) which is usually an inflated price with many demographic factors involved influencing the RMV).
(0)
Reply
(0)

SGT (Join to see)
Posted 1 y ago
You mean when illegally crossing the border and then negotiating illegal (and exploited) wages afterwards ?
(5)
Comment
(0)

MAJ(P) Eugene Chu
1 y
Not funny, it means forcing you off your land for his purposes

SGT (Join to see)
1 y
MAJ(P) Eugene Chu Thanks, I'm aware of Eminent Domain, its nothing new, so its not for 'his' purposes, its for 'government' (the people's) purposes, and this is not the first time its been exercised, not in the least:
thehill.com/blogs/pundits-blog/the-administration/312436-confiscator-in-chief-obamas-last-minute-land-grab-an
Also: "The fence was born in the middle of a fierce national debate on immigration reform. In --2006--, Rep. Peter King, a New York Republican, introduced a plan to build hundreds of miles of a physical barrier along the southern border. Although controversial, the proposal won bipartisan support. Then Sen. Jeff Sessions, the Alabama Republican, led the fight for its passage. Yea votes came from Democratic Sens. --Hillary Clinton- and --Barack Obama--." -http://www.texastribune.org/2017/12/14/border-land-grab-government-abused-power-seize-property-fence/
BLOB: I'd rather pay for the wall and eminent domain compensation, then endless years of (what the Dem candidates have already overtly verbally endorsed) 'free healthcare' for any/everyone (to include illegals). Call be a penny-pincher, but...
More and more, if you like:
gideonstrumpet.info/2008/07/where-does-obama-stand-on-the-misuse-of-eminent-domain/
"Obama will support legislation that balances the rights of property owners and the interests of local communities in economic development"

The Taking: How the federal government abused its power to seize property for a border fence

A decade ago, many border Texans got a raw deal when the federal government seized land for a barrier — while others pushed up the price. Will the government's rushed, haphazard process be repeated as it pushes for a border wall?

MSgt (Join to see)
1 y
MAJ(P) Eugene Chu - It's not for "his purpose". If bother to do any research whats so ever you will see that this has type of thing has happened before by not only the Federal Government but by cities and States.
(1)
Reply
(0)

MSgt David Hoffman
Posted 1 y ago
SSG Shavonde Chase The answer to your question is in the article.
(4)
Comment
(0)
Show More Comments
Read This Next
RallyPoint Home