Elijah McClain: ‘No legal basis’ for detention that led to death

PO1 William "Chip" Nagel
170
9
5
3
3
0
An independent report in Colorado has said that officers involved in the death of a young black man in police custody had no legal standing to stop, frisk and detain him.

Elijah McClain died in 2019 in the city of Aurora, three days after being put in a chokehold and injected with ketamine.

A panel of outside experts faulted the police officers for stopping the 23-year-old and the paramedics for giving him too much ketamine without a proper examination.

Officers were initially cleared of wrongdoing, but the case sparked outrage across the state, receiving renewed attention last year after the death of George Floyd. 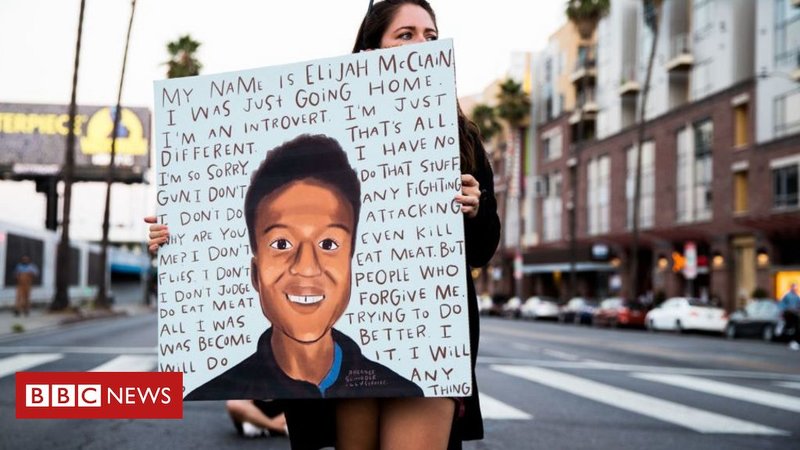 Elijah McClain: ‘No legal basis’ for detention that led to death

SFC Casey O'Mally
Posted 1 mo ago
Let me say that I am in no way defending this incident, specifically, or any other incident, specifically. I was not there, and have no true knowledge of the incident. Additionally, I am in no way condemning McClain. At least according to the article, the WORST thing McClain did was struggle when being assaulted. Which I believe MOST of us would also do. If a group of cops surrounded me when I was doing nothing wrong and then started choking me out, I would try not to die, too.

That being said, part of the problem of this article, and articles like it, as well as our collective rush to judge, is that we are looking at it with hindsight. Knowing what we now know - that McClain was simply a shy introverted autistic kid who was listening to music, and wearing a ski mask for legitimate reasons - it is obvious this was completely botched by the police. But... what did the cops on the scene know and see?

They saw a guy wearing a ski mask when responding to a report of a suspicious person. They saw that same guy completely ignore their calls to him. Then, when they moved to confront him, he struggled, and resisted arrest. He resisted to the point where they felt the need to sedate him. And they gave the medic a wrong weight. I am guessing none of those cops had done a stint as a carnie in the "guess your weight" booth. But even that part is highly irrelevant, which I will get to at the end. Those are the "facts of the case" (as presented by the article) that the police were acting on. They didn't know he was introverted or autistic. They didn't know he was wearing the mask because of skin sensitivity. They didn't even know that he had headphones in, as the ski mask would have covered them.

Looking at this situation in a more "heat of the moment" fashion makes this case MUCH less obvious and clear cut. I know next to nothing about this case, gaining ALL of my data from this article. Based on that, I still believe the situation was handled poorly by the cops. But I am hesitant to immediately jump to charges beyond dereliction of duty or similar charges, without getting more facts.


Now.. about that "wrong weight" issue, which the article mentions...
In this part I am specifically addressing the "wrong weight" issue, completely separate from the circumstances which resulted in the injection in the first place. An argument can be made that he should not have been sedated to begin with, which is a potentially valid argument. But working from the fact that he WAS sedated, let's look at the impact of the police giving the wrong weight to the medic, which the article implies is directly responsible for the medic ODing MClain.

I understand that sedation in the field differs from anesthesia in the hospital, but I have to assume that guidelines for safe dosage in the hospital have to ALSO be safe in the field. According to 6.5 to 13 mg per kg of body mass is used for intramuscular (IM) induction for anasthesia (i.e. to put someone under), with a recommended average of 5mg per pound. I am assuming the injection was IM rather than intravenous (IV), because in order for a dosage of 500mg to be valid for a IV induction, they would have given a weight of AT LEAST 245 pounds, which I think any medic would have questioned, based on the pictures in the article. And recommended average dosing guidelines (1 mg per pound) would have meant a weight of 500 pounds, which NO ONE would believe, based on the pictures in the article. Additionally, even at 245 pounds, that is the VERY TOP end of dosage, and I have to assume a reasonable medic would not automatically jump to max dosage.

So, assuming an IM injection, a 40kG (88 pound) adult should be safe with up to 520mg of ketamine for induction. At 100 pounds, 500mg would have been the recommended dosage, by average. McClain, by the pictures in the article, has a slighter build, but also appears to be of at least average height. I am going to guess that he weighs AT LEAST 110 pounds, due to his height, which appears to be at least average height and his build which, while slight, is not anorexically so. Dosing for that would be between 325 and 650 mg of ketamine (assuming it was IM). Medics gave him 500mg, which is not PERFECTLY in the middle, but close to it. Even if the cops said he weighed 220 lbs (which would be unbelievable, IMHO), and they dosed him with 500mg, there should be no issue. If they said he weigh 220 and he only weighed 110, 500 mg should STILL be no issue. Quite simply put, if McClain weighed anywhere between 85 and 220 pounds, 500 mg SHOULD have been safe, although at either extreme, it would have been ill-advised (IMHO) as pushing the limits of risk or efficacy, as the case may be. Giving McClain's weight very likely falling closer to the center of that range, regardless of what weight the cops gave the medic, 500mg of ketamine should have posed little to no risk for McClain.

Further, according to an NIH study published in 2014 (so should be in use by the time this encounter happened), recommended dosage for sedation (as compared to anesthesia) it 4mg/kg of estimated body weight. (Source: https://www.ncbi.nlm.nih.gov/pmc/articles/PMC4251212/ ) Following that guideline, in order for 500mg to be appropriate dosing, the cops would have had to provided an estimated body weight of 125 kg - or 275 pounds. Would anyone looking at that guy believe 275 pounds? It seems obvious to me that either the medic was unaware of the NIH recommendation, the medic's specific department provided guidance that contradicted NIH recommendation, or the medic screwed up the dosing. None of which are on the cops.

I am NOT trying to shift blame away from the cops, by blaming the medic. McClain would have never needed to be sedated in the first place, if the cops had reacted better. But once sedation was called for, according to what I outlined above, the OD was NOT the cops' fault, even if they DID provide a bad weight estimate.

Violent and agitated patients pose a serious challenge for emergency medical services (EMS) personnel. Rapid control of these patients is paramount to successful prehospital evaluation and also for the safety of both the patient and crew. Sedation is ...