Should a Soldier be forced to attend Air Assault School? 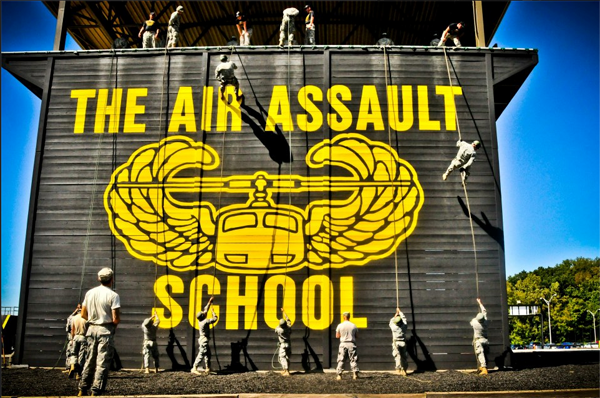 So, I know very well this may open a can of worms however, I would love to hear some responses on this topic.&nbsp; The deal is: The CG has a policy here that every able person will attend the Fort Campbell AA school.&nbsp; I for one have no problem with this.&nbsp; The problem I do have is being forced to send soldiers that do not want to attend or are not ready to attend.&nbsp; I have been running an "AA PT program" for about 3 weeks now.&nbsp; The previous one just wasn't producing enough ready soldiers.&nbsp; I am doing everything im my power to get these soldiers ready, however the majority of them are not physically ready.&nbsp; This is what I am trying to improve on.&nbsp; The rest just don't want to attend in the cold weather.&nbsp; I know there are some of you out there with this same issue.&nbsp; I would love to hear how you are dealing with it or motivating your soldiers to go in the cold.
Posted in these groups:

1SG (Join to see)
Posted >1 y ago
One good thing about Air assault school is the fact that it's is one the the few schools still remaining that is open to any MOS, any Soldier regardless of age or gender. Within the limits of their profile. Really it's not physical demanding. Ok so you have to climb a rope and negotiate a few obstacles and complete a 12 mile ruck. That's nothing any adult man or woman who has pride in calling themselves a Soldier should not be able to accomplish. Air Assault school is so much more than fast roping from a helicopter. It instills discipline and attention to detail, qualities that the Army was established through. So much training in the Army has converted to online and distance learning. Regardless if you ever secure a sling load or secure an LZ. It's real hands on training and knowledge gained through real time professional instructors training. There are a lot of required training now days in the army that may never apply to your daily duties mandated through AR 350-1. They are command directed and we still do them right? So what is the difference. Knowledge is power and Soldiers should be proud to have the opportunity to explore themselves and earn the air assault badge versus sitting at some computer tapping a way at some pointless slide show to print a certificate. Bottom line is we are Soldiers and Soldiers train to better themselves, their unit and this nation. If your not trying to be a team player and take a little pride in yourself and your unit then maybe the army is better off without you.
(54)
Comment
(0)
show previous comments

CPT Lawrence Cable
2 y
SGT (Join to see) - Granted it's been more than a few years since AA at Ft Campbell, but at that time, the physical condition of the soldiers seemed more related to MOS/branch than anything else. I don't remember the grunts, combat engineers or combat medics, nor most of the pilots, having any issue with handling the PT. Since Campbell pushed for every soldier assigned to be AA back then, and I understand still today, a lot of Supply, AG and other rear echelon types tried out and did not have the physical conditioning to handle the PT.
(0)
Reply
(0)

SGT Robert Mcfadden
1 y
I finally finished after being forced. I had max pt scores. It is very physically demanding. Had to complete to continue to be a squad leader. I'm glad I'm out now mostly because of leaders like you 1Sgt, more concerned about your air assualt percentage than the soldiers you lead. Btw I think I was a good leader, but I guess the army is better off without me.
(0)
Reply
(0)

SGT Joe Downs
1 y
SGT McFadden, Your "guess" is spot on. At least I hope you are proud of your service time. Your post makes it appear you aren't. Competition is what we soldiers do. High-speed, low drag, and challenging ourselves to be more than consider we are able. Not every leader is outstanding, but every leader can be an inspiration, either to emulate or to improve upon. Glad you weren't my Section Chief, Squad Lead, or mentor. You just quit and soured like a shriveled lemon. Enjoy our crazy lazy civilian pouge world.
(0)
Reply
(0)

Our CCWO who is 52 years old just recently graduated. Our BDE SIP CW4 older than anyone in his class was a Honor Graduate out of 200 who started. Three CSM took and passed the course. Age is not always a factor. All Soldiers will be leaders to include Warrant Officers and should lead by example.

However, to relate to some of the remarks in terms of no value if you been to combat in a Aviation Task Force you realize many things that AASLT teaches you are utilized in the field. We had numerous frustrated loads down range due to lack of Sling rigging & training. We sat on the gournd waiting for Soldiers to figure out their seatbelts. ** Most importantly we had Soldier unfamiliar with being around aircraft walk up under the wrong part of the aircraft risking harm to themselves and the Air Crew. If nothing else it teaches you how to behave and have a respect for being around the aircraft and aviation operations. If you ever been under a CH-47 it can be an experience.

Everything in air assault school is already either required by AR 350-1, Post policy or in the PT Manual. So it should not be an issue dong it and we should be training the same tasks regardless. The O Curse is routinely on training schedules for PT and we will do our required 12 mile road marches.

I will leave the whole profession development aspect out but when the Army needs to cut Soldiers the ones that separate themselves from their peers rise to the top. Oh and it worth promotion points as well. I don't know why anyone would not want a chance to take two weeks off to rappel out or an Aircraft and become a more knowledgeable Soldier.

It is really about the whole physical thing that freaks Soldiers out - which means they are not in the shape they should be and our PT programs need work - how many fail after day 1 or before the road march? VERY FEW.

Finally as said we are the 101st Air Assault division be proud of your heritage.

Cannot answer Airborne without looking into it. However in regards to Air Assault neither is a true answer - age or profile. Yes, technically they have limits and rules on who can attend. But if your profile does not prevent you from doing the mandatory task required I have called and got our Soldiers in. Otherwise how would a combat wounded amputee with a prosthetic leg go?

If your profile would bring you undue attention from the cadre or possible bring more harm to yourself then I would not advise it. Talk with your doctor, beside most doctors profiles are recommendations. We had an NCO come off his walking profile after 8 years and now run 6-8 miles routinely. He just learned to train himself better.

SSG Stephen Gillard
3 y
Air Assault school taught a few basic guidelines for helicopters and how to behave around such silly creatures. The sad fact that units still do not teach this during pre-deployment blows my mind. Does this school make you a battle ready expert in rigging and slinging equipment? No, not even close. Does army leadership believe this? Sadly, yes. A great example is units trying to sling water bottles and rations with cargo nets. Different units, same epic failures. I'm glad this army school has inspired so many. Good for them.
Age is never a factor if you are fit enough to stand up without needing an oxygen mask immediately afterwards. The E-7s and E-8s that got booted out of my class looked like runway models for male paternity BDUs. Forcing soldiers to participate in "Air Assault PT" or get put on post clean-up details or gate guard did not look like it spurd the proper results. Nobody likes doing things they are forced to do. Most of the "fall-outs" had been through the "training" multiple times and knew it was PT or details. It's easier to fail dramatically at push-ups then have every CSM on post spout uniform correction from their cars as the troops are picking up trash.
(0)
Reply
(0)

CSM (Join to see)
Posted >1 y ago
Interesting topic SFC Delaney, and in my respectfully humble opinion, the 101st isn't the Ranger Regiment or SF it's a regular Army Divisional unit made up of people that are assigned by needs of the Army not volunteers. Your unit is just like all the others except your mode of transportation is a helicopter. Personally, I can respect the honor and traditions that the 101st has as the only Air Assault Division but cannot understand how it's mandated that people attend a course little alone if you're a leader and don't have it you don't get to be a leader? Hog wash! One of the best commanders I met in the 101st was BG Pete Johnson and he wasn't ASSLT qualified. The other point is what you learn there to what you must do in your everyday jobs. How often do you guys repel out of helicopters outside of what you do at the school? How often are you preparing sling loads in your units? And lastly, WTH does air assault school have to do with actually assaulting an objective in helicopters?&nbsp;
(43)
Comment
(0)
show previous comments

SSG Evan Lourie
2 y
CPT (Join to see) Why is a CPT downgrading a school in which he is not tabbed in ? You don’t need to be a Ranger to be a leader but by all means it definitely prepares you to be a better leader in that position....
(0)
Reply
(0)