Posted from msn.com
Posted in these groups: 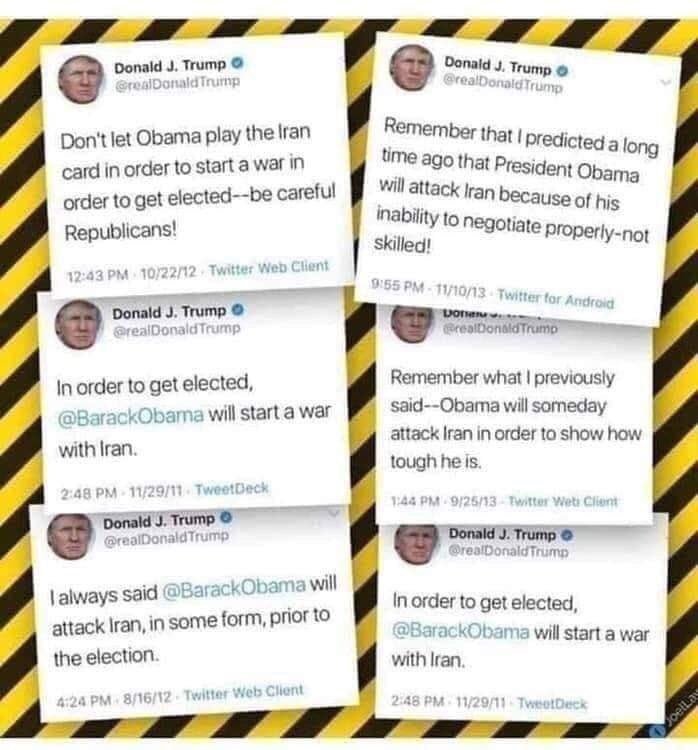 MSgt Steve Sweeney
9 mo
SPC David Stephenson - Perhaps you should check facts that are in dispute? Obama did release billions of dollars, but it wasn't US dollars in that it came from US taxpayers. It was Iranian money that we had frozen and were now giving back. Unlike when Reagan gave Iran money and arms for hostages that were never received for the payment.
(2)
Reply
(0)

SSgt Ray Stone
9 mo
MSgt Steve Sweeney notice I didnt respond to him . Because regardless of the facts we present his brain wont accept it due to programming from FAUX NEWS,RepubLiCon talking points,and just plain ignorance
(1)
Reply
(0)

MCPO Roger Collins
Posted 9 mo ago
During the Clinton and Obama Administrations, we found that appeasement, rather than action led to further aggression. The Iranians are in the process of becoming a Nuclear Power. Strategically, they poke the beehive to show our enemies that we are a paper tiger that can be beat. How many of our SMs and civilians must be killed in order to respond? In answer to your basis question, it’s time to end their continuous provocation, before they become another N. Korea.
(4)
Comment
(0)

MAJ (Join to see)
Posted 9 mo ago
I hate to say it, but I question the motive.
(4)
Comment
(0)
show previous comments

SPC David Stephenson
9 mo
While most are talking about Suleimani others in the convey may have contributed to green lighting of the strike.

While many are claiming that the US is the aggressor escalating matters, others that were killed in the strike points to a preexisting escalation in the Iran/Iraqi proxy war against the US by Iran and Iraq.

Abu Mahdi al-Muhandis who was riding in convoy was responsible for the bombing of the US Embassy in Kuwait in 1983 (French Embassy also targeted). Luckily not all went off as planned as it would have leveled our Embassy.

More currently he was responsible for attacks carried out by the Kata’ib Hezbollah militia which he founded and which is listed by the US as a terrorist group. Kata’ib Hezbollah is regarded as a hardline pro-Iranian faction blamed for targeting US troops, with Muhandis himself accused of running “weapons smuggling networks, participating in attacks of western embassies and attempted assassinations in the region”.

Abu Mahdi al-Muhandis breaking bread with Suleimani especially after the recent embassy attack in Iraq I would say represents a clear and present danger to the US and it allies in the region. Just guessing there is more to this than what is being reported as the US would need legal grounds for such a high profile strike.

As well, Soleimani's son-in-law, a member of the Lebanese Hezbollah (a listed FTO by States Department) was killed.

Yes the ups the ante but this is the result in allowing these individuals to fester for decades. In all honesty they should have been derailed long before becoming a state level problem

All I can say is that I hope we are tracking Hezbollah as I feel this would be Iran's method of retaliation. Something right here in the US possibly with support from Hezbollah's base in Cuba.

SPC David Stephenson
9 mo
MAJ (Join to see) - thanks sir - This may be something to add to the discussion - Hezbollah has been breaching our southern border for years. It's not well reported but more reasoning for my concern about Hezbollah as well a need to secure the border and to go after cartels. More than likely the cell(s) is/are already state side - If I have to bet - multiple car bombings.

I would not be surprised if the CIA was working a cartel in Mexico to thwart Hezbollah's presence in the US.

In a shocking revelation made by a veteran U.S. counterterrorism expert, Hezbollah has infiltrated the Southwest United States by joining forces with Mexican drug cartels that have long operated in the region. Judicial Watch has for years reported on the chilling connection between Islamic extremists and Mexican drug cartels. In fact, as far back as …